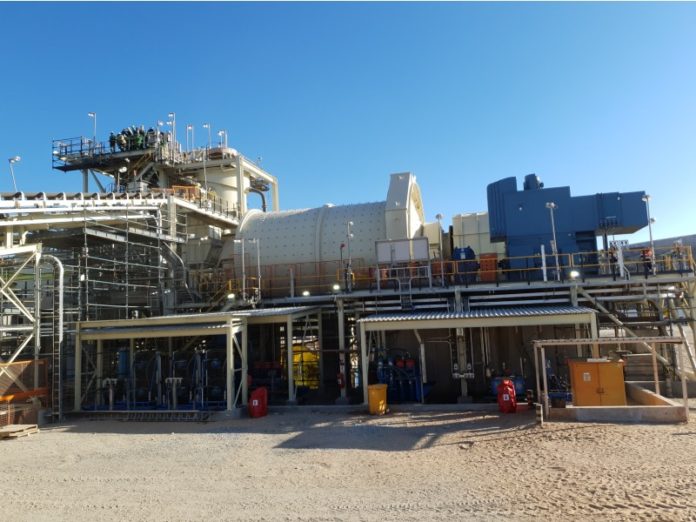 Botswana made the headlines in June as it celebrated the official production start-up from the world-class Khoemacau copper/silver project. And while the delivery of first concentrate from any new Greenfields project is a milestone achievement in itself, there are many more reasons why this new mine should make it into the ‘African mining hall of fame’, writes LAURA CORNISH.

What makes Khoemacau so special?

Situated about 70 km south-west of Maun in the northern region of Botswana, the 100% privately owned Khoemacau copper project is situated on the Kalahari Copperbelt and forms part of a 4 040 km² land package that Khoemacau Copper Mining owns. (The company is wholly owned by private company Cuprous Capital, which in turn is owned 87.9% by Cupric Canyon Capital LP, a company majority owned by funds advised by Global Natural Resources Investments and 11.9% by Resource Capital Fund VII LP.)

Delivering as mentioned, a US$410 million world-class, significantly sized underground mining operation during the height of COVID-19 is no easy feat, but Khoemacau is proof that it can be done.

A lack of underground mechanised mining skills in the area and no decent access road for the first nine months of project development and equipment supply challenges associated with the pandemic posed no challenge too big for this project.

Not only did the project achieve first production as per its original timeframe (established before the pandemic) in June 2021, it also kept to its original budget and closed out the project within 2% of its original financial model. “To safely execute the project, construct and bring into production a world-class mine, in two and a half years since we started construction, considering the impact and typical delays caused by COVID-19, is an achievement we are particularly proud of,” states Johan Ferreira, CEO of Khoemacau Copper Mining.

Khoemacau represents the first fully mechanised underground copper (and silver) mine in Botswana and is also one of the few mining projects to be delivered, relatively unaffected, during a global pandemic which has, generally speaking, caused scheduling delays across the mining development board.

Having developed a relationship with Khoemacau in early 2017, Fluor was officially awarded the full EPCM contract for the project in 2018, which incorporated detailed design of the surface infrastructure and upgrading of the processing facility, procurement of fixed surface equipment (including the long lead equipment items) and construction management of the surface infrastructure and the process facility upgrading.

“This undoubtedly can be attributed to the full integration and unwavering commitment of both the mine and EPCM teams,” points out Russell Ayres, Fluor’s Mining & Metals vice-president and general manager for Asia Pacific, Europe and Africa.

Ayres believes in an integrated project management model, noting that together, challenges are quickly resolved, and delivery targets are well aligned.

“For the large part, Khoemacau and Fluor key personnel required to deliver the surface infrastructure and process facility part of the project on site, stayed resident on the mine, for months at a time to ensure we maintained the original schedule we had committed to – something I pride ourselves in achieving as the commitment made to the project’s funders needed to be met. This was a commitment Fluor undertook on behalf of Khoemacau,” he continues.

As if the above achievements are not enough, the entire project recently surpassed the 7 million LTI-free hour mark – an incredible feat for any mine project development, “and something Khoemacau believes is a rare achievement” Ferreira notes.

This was achieved through dedicated focus and interventions from the integrated project management team and commitment from contractors, despite a lean staffing approach of a combined construction management team, which has covered a widespread site that extends over 90 km.

“And while the mine itself is substantial in size, it represents only the start of what is intended to be a much larger project in the medium-term. A strategic priority is the expansion study that is already well underway,” Ferreira highlights.

“At present, the Khoemacau mine comprises of the high grade Zone 5 underground mine and associated surface infrastructure, as well as the metallurgically and volumetrically upgraded Boseto processing facility.– referred to as the ‘Starter Project’ which is now in the process of ramping up to its nameplate throughput of 3.65 Mtpa – to produce +60 000 tpa copper and +2 Mozpa silver, with both payable metals in concentrate at a cash cost of about US$1.30/lb and an AISC of about $1.75/lb (net of silver credits at consensus pricing). Based on a resource of 92 Mt, delivering these volumes equates to a long operating lifespan in excess of 20 years,” Ferreira outlines.

The mine itself comprises three boxcuts with twin declines, each servicing three standalone long hole open stoping mines. The ore is processed at the nearby Boseto process plant (which was acquired out of provisional liquidation back in 2015) which Khoemacau Copper Mining refurbished and metallurgically and volumetrically upgraded from 3 Mtpa to 3.6 Mtpa, and now includes an improved floatation circuit.

“The infrastructure required to deliver the project is another proud achievement,” says Chrisjan van Wyk, project director for Khoemacau Copper Mining. This included the establishment of a 35 km haulage road from Zone 5 to the Boseto processing facility, 32 km of access road from the Boseto processing facility to Zone 5, a 50 km 132 kV transmission line and two 2×25 MVA sub-stations, an extension of the Haka Wellfield, water reservoirs and a 40 km water pipeline that supplies borehole water to Zone 5 and, the Zone 5 mining surface infrastructure (including administration offices, changehouse, medical and security facilities, workshops and stores and an on-site 560 person accommodation camp).

With nameplate capacity in sight, what’s next?

“We are already tracking well towards achieving steady-state production in Q1, 2022, however, getting this project to full performance, to leverage these remarkable copper and silver prices, and continuing to prove up our significant expansion opportunities remain top of the company’s priorities,” Ferreira notes.

Considering the Khoemacau land package is substantial and known exploration work has revealed additional copper and silver resources , the mid-term plan aims to expand production to over 130 000 tpa of copper and 5 Mozpa of silver metal in concentrate and in the longer term to +150 000 tpa of copper and +6 Mozpa of silver metal by developing further resources, with grades in excess of 2% copper, in the area including Zeta North East, Zone 5 North and Mango. “There is also potential to expand mining at Zone 5 to 4.5 Mtpa ROM – which we are already confident can be achieved considering the resource continues at depth below 1 200m,” Ferreira confirms.

This would be achieved through the construction of a new 4.5 Mtpa process plant at Zone 5, thereby freeing up the Boseto plant to treat new ore originating from the above-mentioned deposits.

“Having met all of our original commitments, we have undoubtedly delivered a great project for Botswana, notwithstanding the challenges we encountered. This project represents diversity for Botswana’s mining sector and a significant new GDP revenue generator outside of diamonds. What we have delivered to date is just the beginning of a much bigger story for Khoemacau and Botswana,” Ferreira concludes.