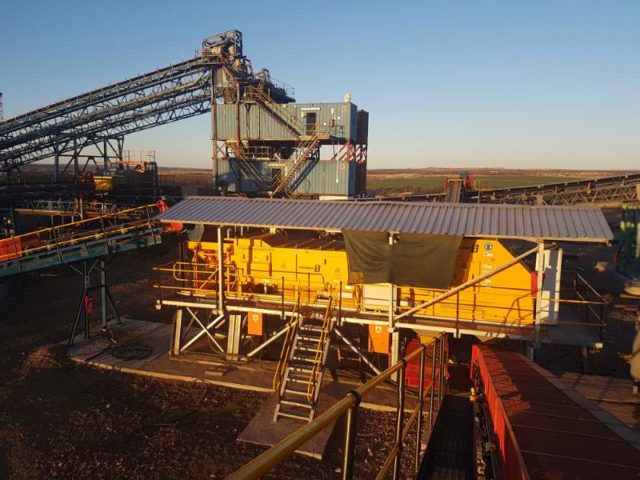 Large vibratory screens play an important role in the processing of ore at mining operations.

Traditionally, the focus has always been on the capital cost, but Etienne Swanapoel – National Sales Manager at IMS Engineering, is of the view that total cost of ownership should be a principal factor in any buying decision.

“With the STM-SCREEN Two-Mass vibratory screens, mines can experience the most reliable screen in the industry with an average service life five times more than that of a brute force model.

They can also increase their screening capacity by up to 40% and improve throughput by at least 30%,” says Swanepoel.

STM-SCREEN Two-Mass vibratory screens allow mines to extend deck panel service life by up to 50%. The material does not slide across the deck panels but is propelled up and down along the entire length of the screening surface of the screen.

This is complemented by screen life of 5+ years compared with two years for conventional brute force machines. The STM-SCREEN is more ruggedly constructed since vibratory drive forces are evenly spread around the structure. It is never subjected to torsional forces and machine frequency stresses like that of conventional screens.

“Two-Mass vibrating screens 2,4 m and wider are designed with a centre plate extending the length of the machine. Multiple cross beams and K braces extend from the centre plate to the side panels, creating a structure free of any torsional stresses.

“It is torsional stresses that are constantly applied to conventional screens which lead to screen failure. The centre plate allows for a more compact machine,” explains Swanepoel.

The STM-SCREEN has multiple spring brackets (drive beams), compared to one drive beam on conventional brute force screens that connect the side panels to the centre plate.

This has a couple of key benefits. First, the beam length is reduced by half, which reduces beam deflection forces by a factor of four. Second, having multiple spring brackets evenly spreads vibratory drive forces throughout the entire structure. This prevents the side panel degradation commonly found in brute force units.

The Two-Mass vibrating screen’s deck panel support frames have bolted on sections that can be easily replaced when localised wear occurs, during routinely scheduled outages.

The STM-SCREEN utilises General Kinematics’ proprietary Two-Mass low-stress vibratory drive technology that features an exciter mass with eccentric vibratory motors connected to the screen through mass by a network of coiled springs.

“The STM-SCREEN goes from idle, through sub frequencies to full operation, and back to idle very smoothly. It does so without sending significant dynamic forces into the support structure or causing stresses to the machine structure itself,” says Swanepoel.

This subjects the screen to severe stresses and results in high dynamic forces impacting the screen’s support structure.

“With increased revenue in mind, the STM-SCREEN can process higher tonnages with higher efficiency to maximise the run of mine throughput and minimise the recirculating load. Higher reliability and uptime reduces the likelihood of unscheduled outages and loss of operating revenue,” concludes Swanepoel.