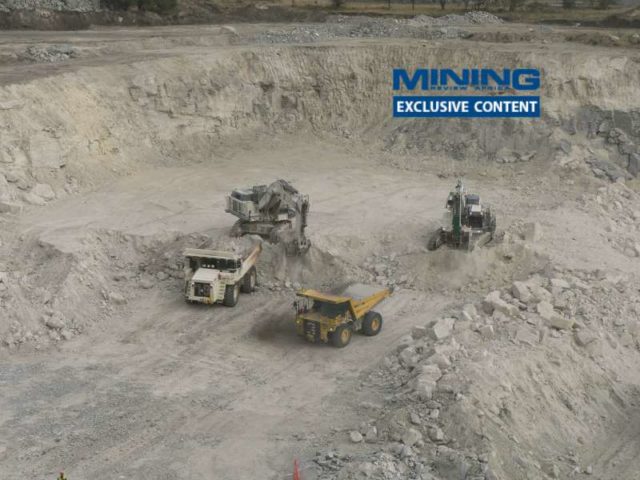 This in part can be attributed to the greater objectives of Level 1 BEE parent company Southern Palace Group, which is looking to maximise on the value its companies and business units have to offer, writes LAURA CORNISH.

Concor Opencast Mining represents one of eight business units under the Concor umbrella, and was acquired by the fully black owned infrastructure and industrialist powerhouse Southern Palace Group (SPG) in the latter half of 2017.

“This has seen us change the trajectory for our businesses, including that for Concor Opencast Mining,” says the company’s MD Rodger Herne.

While in the past the company has been better known for its capabilities of mining steeply dipping narrow ore bodies in the hard rock mining space, the business is looking to establish its name and reputation across the entire opencast mining spectrum, as well as diversify into the bulk materials handling space.

There are two legs to the company’s strategy – the first entails diversifying its service offering to incorporate mining and earthmoving support services that will strengthen its value proposition to potential clients.

“This will include bulk materials handling work, crushing and screening as well as increasing our scope for drilling and blasting services to include our own in-house fleet.

“Ultimately, our intention is to provide a cradle-to-grave turnkey suite of services to the industry, one that starts at early planning stage and journeys alongside the client during feasibility studies and mine design – through to project start-up,” Herne outlines.

The second leg of the strategy is significant in its own right for any opencast mining company and entails volume and size.

“In the past, we focused predominantly on the 80 t excavator class using 40 t ADTs. We have since invested heavily in our equipment fleet which now includes 55 t – 100 t payload rigid dump trucks and 140 t operating mass excavators as well.”

With the significant expansion of its equipment fleet, Concor Opencast Mining’s primary objective is to secure new opencast mining contracts – mining mass ore bodies which require the movement of monthly volumes in excess of 1 MBcm.

Importantly, the expanded fleet is fully supported with the company’s in-house maintenance service, performed in conjunction with the relevant OEMs and compliant with the necessary ISO accreditation as well.

Past and current track record

Concor Opencast Mining in the past traditionally focused on the platinum sector and consequently has developed a proud track record of mining narrow and steeply dipping ore bodies for clients such as Anglo American Platinum, Impala Platinum and Lonmin Platinum (prior to its acquisition by Sibanye-Stillwater).

“We have more recently expanded our footprint back into the coal fields of Mpumalanga while further developing our extensive in-house drilling and blasting expertise in the region,” Herne reveals.

Outside of the company’s current flagship project – mining the Zwartfontein pit at Anglo American Platinum’s Mogalakwena mine, its current project book includes the construction of the tailings storage facility at Mogalakwena and full drill and blast services at state-owned mining company African Exploration Mining and Finance Corporation’s Vlakfontein coal mine.

“Perhaps what could be considered a third leg to our growth strategy is the execution of work outside of South Africa, across the southern portion of the African continent.

“We have priced work on a few new projects in Botswana, Namibia and Mozambique and are feeling confident of securing what will be an extremely large project for the company in the near future  – which would undeniably change the face of this business,” Herne confirms.

While the number of earthmoving competitors in the field has been high until more recently, Tseki notes that the company has seen consolidation in the market – “which does necessitate that we showcase and maximise on our strengths even more.

The quality of our service, coupled with the right expertise and the requisite skills needed for the execution of any project, timeously must be highlighted, as should our solution-orientated approach.”

“Being a fully black, woman-owned company which responds to government’s objective of having more women participating in the mainstream economies of our country, gives us an additional competitive edge in South Africa.