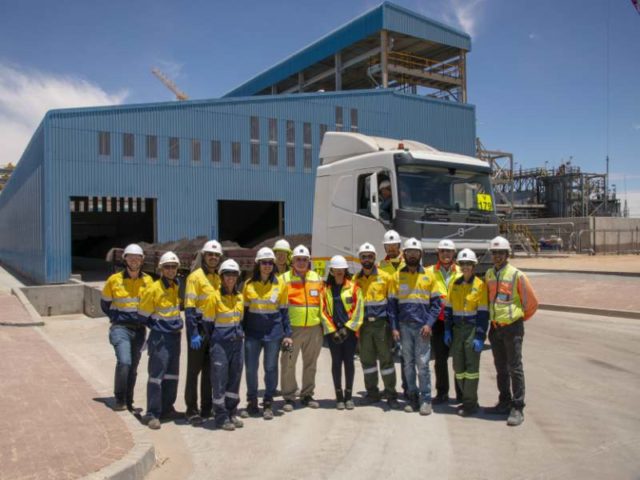 Vedanta Zinc International is maintaining momentum in bringing to life its US$400 million Greenfield Gamsberg zinc mine, located in South Africa’s Northern Cape.

Work over the past six months has been progressing well – having achieved first zinc in metal concentrate production in September 2018, the project is currently ramping up to full production which it aims to achieve within the next six to nine months, writes CHANTELLE KOTZE.

Gamsberg, host to the world’s largest undeveloped zinc resource, expects to add up to 250 000 t of zinc to the company’s annual production when Phase 1 of a potential three phase mega project, reaches commercial production later this year.

This is only the first step, and will act as the anchor for growth in Vedanta Zinc International’s (VZI) journey to become a 1 Mtpa zinc producer through the creation of an integrated, safe and sustainable Southern African zinc cluster.

The project’s development up to this stage has not been smooth sailing, admits VZI CEO, Deshnee Naidoo, who has led the development of the Gamsberg project since joining the company in 2014.

“Despite this, the company forged ahead with advancing the project, made possible by the company’s flexible development approach, which allowed for adjustment of the pace of development to stay in line with market conditions and affordability.

“With this approach VZI managed to decelerate and accelerate the project so that the development timelines were actually no worse off than the timeline the company originally committed to in November 2014 – despite delays resulting from a weakening of base metal prices in 2015 and 2016 and the resultant limited access to funding,” says Naidoo.

Moreover, this approach, coupled with the company’s focus on sustainable cost reduction at Gamsberg, has allowed VZI to shave $200 million off the original Phase 1 development capital expenditure, reducing it to $400 million.

“We turned a difficult situation into an opportunity,” Naidoo notes, further remarking that building the project in a counter-cyclical market allowed VZI to take advantage of exchange rates and to renegotiate contracts, and then deliver the project in a stronger price environment.

Making quick work of a mammoth mine

Phase 1 of Gamsberg, which is now complete, has a life of mine of 13 years, and will mine and mill 4 Mtpa of ore from three open pits, namely the Gamsberg East, West and South pits, to produce 250 000 tpa of zinc in metal concentrate from its concentrator plant.

“During construction, VZI employed 3 400 people at the peak of construction, and will create between 700 and 800 jobs during the operational phase – 750 people of which are already employed,” says VZI VP of Projects, Satish Kumar.

Phase 2, which will require an additional investment in the order of between $350 million and $400 million, will see VZI mine 8 Mtpa of ore to produce 450 000 tpa of zinc in metal concentrate to form one mega project (feasibility study complete), which will result in the consolidation of all three of the pits mined in Phase 1.

A second duplicate concentrator with a throughput of 4 Mtpa will be constructed, to add an additional 200 000 to 250 000 tpa of production.

“We will press the button on Phase 2 the moment Phase 1 has reached full production,” says Kumar.

This production level will ultimately be increased to 600 000 tpa in Phase 3, which is expected to start eight to 10 years from now, but will require additional exploration and will consider underground mining below the Gamsberg East pit, says Kumar.

VZI’s vision does not start and end with bringing Gamsberg into production; the vision is to create an integrated, safe and sustainable southern African zinc cluster capable of producing 1 Mtpa of zinc in metal concentrate from its three southern African operations.

These are Black Mountain Mining and the associated Gamsberg project in the Northern Cape and the Skorpion Zinc mining and refining operations in southern Namibia.

A key part of this vision is to build a smelter. VZI began a feasibility study in May 2018 to investigate the feasibility of developing and constructing a $700 – $800 million Zinc Smelter-Refinery Complex to process the concentrates from Gamsberg – this smelter construction would coincide with the second and third phases of the Gamsberg mine’s expansion plan.

In addition to the feasibility study, VZI has commenced the environmental and social impact assessment and the technology selection study has been fully advanced. VZI is currently in discussion with various EPC contractors on the construction of the Zinc Smelter-Refinery complex.

“The establishment of the proposed beneficiation plant will transform Gamsberg into a fully integrated zinc production site, with the mine, concentrator and Smelter-Refinery Complex in a single location, making it the first integrated zinc manufacturing facility in South Africa,” says Naidoo, who is fully aware of and passionately driven by the benefits that an integrated zinc plant will bring to the Northern Cape region from an economic perspective.

It is envisaged that the first phase of the Smelter-Refinery Complex, to be established adjacent to Gamsberg Phase 2, will have the capacity to produce 250 000 tpa of 99.995% pure zinc metal.

“As the entire Gamsberg project has been developed in a modular fashion, so the Smelter-Refinery Complex could also be expanded to align with Gamsberg Phases 2 and 3,” Kumar explains.

The feasibility study is in the process of evaluating the infrastructural requirements of the zinc complex and also includes a review of previous work undertaken into the possibility of developing a southern African zinc cluster that would incorporate both Black Mountain Mining in South Africa and Skorpion Zinc in Namibia.

Also on the cards is the potential conversion of Skorpion Zinc’s 150 000 tpa refinery in Rosh Pinah, Namibia, into a custom refinery.

“Should our vision be realised, the southern African zinc cluster would have the potential to be one of the world’s largest zinc complexes,” Naidoo notes.

The expansion of Gamsberg into beneficiation streams has the potential to trigger a new wave of industrial and economic development in the Northern Cape, which could provide additional opportunities for Vedanta Resources and others, in what is one of the least developed regions of South Africa.

There are opportunities for further value-adding zinc beneficiation (such as galvanising), the creation of a regional fertiliser industry considering that a zinc smelter-refinery will produce sulphuric acid as a by-product (given the presence of phosphates), the accelerated development of the agricultural industry, prospects for steel production (given the proximity of iron, zinc and manganese mining) and potential for the development of rail and other logistical links.

“The development of Gamsberg would just be the beginning in unlocking further opportunities in the region,” Naidoo reiterates, adding that industrial development would need additional power resources in a region that has vast potential for solar energy, water supply and other economic and social infrastructure requirements.

These investment opportunities could be a game-changer for the Northern Cape region, and contribute to economic growth in South Africa as a whole.