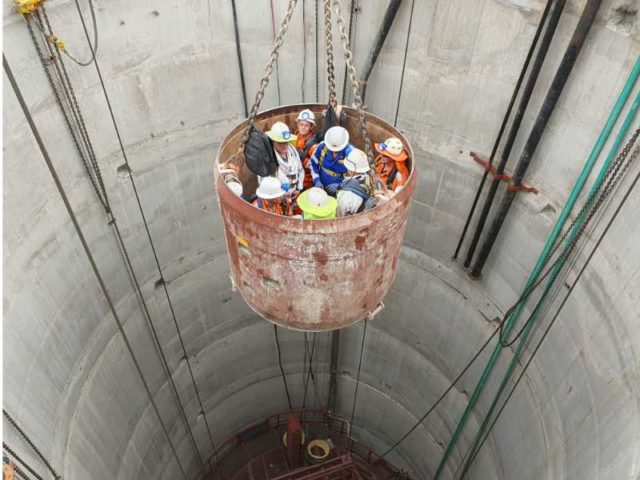 In 2020, Palabora Copper will enter its 64th year of operation – making it one of the oldest mining operations in South Africa.

Despite its age, the operation has a long and prosperous future ahead of it. This is due to a significant US$1 billion investment from its 74% owner HBIS Group, a Chinese iron and steel manufacturing conglomerate.

The investment entails the development of a new underground block cave mining area known as LIFT II, together with supporting underground infrastructure and a large-scale new ventilation shaft. LAURA CORNISH visited the site to learn more about the project.

Situated in Limpopo province on the outskirts of the town of Ba-Phalaborwa, Palabora Copper’s process plant, smelter and refinery complex stands as a landmark in the region.

The mine always has been and currently remains South Africa’s only producing copper operation and is the largest employer in the area.

When the giant miner left, Palabora Copper was swept up from potential jeopardy by the South African Industrial Development Corporation and in the majority, the Chinese Consortium, which is made up of HBIS, Tewoo, General Nice and the China-Africa Development Fund, which got involved through Smart Union Resources South Africa.

This resulted with the Chinese Consortium owning 74% and 26% jointly owned by the South African government through the Industrial Development Corporation, Black Empowerment Consortium and Palabora Mining Company’s employees and local communities.

At the time of the acquisition, Palabora Copper was already a well-established underground mine having transitioned from an open pit operation in 2002.

The mine has maintained an average production (as per its design capacity) of around 45 000 tpa of copper rod (beneficiated from 0.55% copper). The entirety of this production is generated from the LIFT I block cave mine situated around 400m below the open pit.

Ensuring a long-term and sustainable future

After conducting the necessary studies, it was determined that the establishment of a new block cave – LIFT II – would be feasible in extending Palabora Copper’s life to around 2033, from potential closure or a significant drop in production.

PMC Package Manager for Vertical Development, Thabo Mokoena says that, “the immediate action that the new owners had to consider was to extend the life of a then 18 year-old underground block cave mine known as LIFT I.

To this effect, the construction of new declines tunnels underground which  connected the old (LIFT I) and the new shaft (LIFT II) started in 2013. This in essence is similar to constructing a new mine and thus requires installing new infrastructure such as crushers, conveyor belt, ventilation shaft, etc.

The new shaft (LIFT II) is situated 400 m below the old shaft (LIFT I) and is being constructed by a consortium of international and local contractors including the Australian Downer Group (Integrated Services Company) and a South African Mvusuludzo Projects which is 100% black owned and Level 1 B-BBEE emerging mine contracting and development company.”

“The shaft sinking company, Murray & Roberts Cementation (SA) is responsible for sinking the ventilation shaft for LIFT II project. The ventilation shaft-sinking project started in February 2019 and is expected to be completed in mid-2022.  The project initially involved drilling and reviewing various holes to determine the best location to sink the shaft,” articulates Mokoena.

Murray & Roberts Cementation project manager, Jas Malherbe indicates that sinking the ventilation shaft is not an easy task; however, the company intends to complete the entire project without any safety incidents.

A closer look at the new vent shaft

The new ventilation shaft will be much larger than the existing ventilation shafts at 8.5 m (finished diameter) and it will extend 1 200 m in depth. We brought on board our top level personnel from the very early stages of the project to ensure we are all working to the same plan and shared vision.

“Coupled with this was the employment of specialised, multi-skilled teams who are able to handle various tasks on site and have undergone extensive training at our Bentley Park facility in Carletonville,” says Malherbe.

Of equal importance in obtaining its safety objectives is the sinking method deployed, which is a methodology utilised by Murray & Roberts Cementations’ Canadian office, first introduced at De Beers’ Venetia mine and now at Palabora.

“We have however taken lessons learnt from Venetia to improve the process further,” Malherbe highlights.

A shaft sinking charging unit has been designed which comprises emulsion tanks and pumps which will facilitate shaft blasts safely and accurately. Before the round is fired the stage will be raised to a safe position.

The maximum distance allowed for the stage above bottom will not exceed 70 m. The round will be fired from a blasting point on surface.

The lining will be carried out to the bottom of the shaft and the blasted rock will be mucked out by an excavator that fits through the stage, which will discharge into kibbles. This means that only a single person – the excavator operator – will be situated in shaft bottom during the post-blast cleaning of rock.

The hoisting of rock, persons and materials will be carried out by the winder set up in sinking mode with an 11 t payload kibble. The rock will then be tipped in the headgear using an automated tipping arrangement.

“Our vision and supreme determination is to complete the project without any safety incidents. To achieve this, we are utilising the best sinking methods and skills in the industry.

“Our experience in this field allowed us to learn from previous projects and perfect our methods. Completing this project timeously is critical to the overall operation of LIFT II, which will require the ventilation shaft to be fully operational when the project starts-up,” Malherbe concludes. 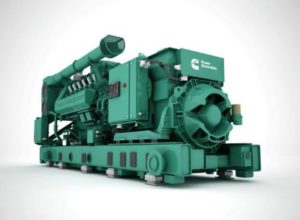