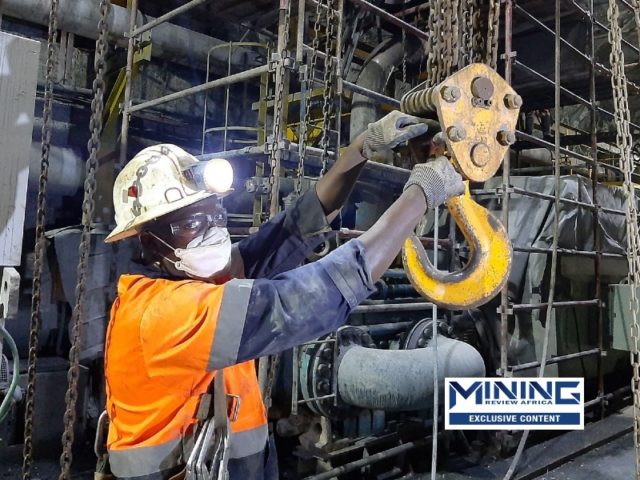 Canadian mining company Ivanhoe Mines together with its local partner, the Democratic Republic of Congo’s state-owned mining company Gécamines, is in the process of redeveloping the historic Kipushi zinc-copper-silver-germanium mine.

Located in the DRC’s province of Haut-Katanga, south-east of Ivanhoe Mines’ Kamoa discovery, adjacent to the town of Kipushi and 30 km from the town of Lubumbashi, Kipushi operated as a high-grade open pit and underground copper and zinc mine throughout its 69 years of operation. In addition to producing copper and zinc, the mine produced 12 673 t of lead and approximately 278 t of germanium between 1956 and 1978.

The operation was placed on care and maintenance in 1993 and in 2010, the mine flooded due to a lack of maintenance. In 2011, Ivanhoe Mines acquired a 68% interest in Kipushi Corporation SA, or KICO, the mining rights holder of the Kipushi project, to become a joint venture partner with Gécamines, who owns a 32% stake in the project.

According to Louis Watum, general manager at Kipushi Corporation SA, there is a significant amount of existing underground infrastructure at Kipushi, including a series of vertical mine shafts (P 1,2,3 and 4) and associated head frames to various depths as well as underground mine excavations.

The newest shaft, the P5 Shaft, is 8 m in diameter and 1 240 m deep and provides primary access to the lower levels of the mine and the bulk of the historical resources, including the Big Zinc Zone. This shaft will act as the mine’s main production shaft, once the mine is back in operation.

To enable rock hoisting, the old primary crusher and the rock load-out facilities at the bottom of the P5 Shaft were stripped out and replaced with new, modern equipment. The new primary rock crusher was installed in the 1 150 m level crusher chamber in May 2018. In parallel, the rock-hoisting winder, which had an annual hoisting capacity of 1.8 Mt has been upgraded and is fully operational. The existing headframe was also fully refurbished, while the main personnel and material winder [at P2 shaft?] has also been upgraded and modernised to meet global industry safety standards.

The main haulage between the Big Zinc Zone access decline and the P5 Shaft has also been fully concreted to facilitate the hauling of the ore and waste using modern, trackless, mobile machinery.  Located at the 1 210 m level of the shaft, is a series of pumps to manage the influx of water into the mine for continual dewatering.

While there has been significant progress made in upgrading Kipushi’s underground infrastructure, the restart of operations would require the construction of a new processing plant and associated supporting infrastructure on surface. Watum says that preparations have already begun for the construction of the processing facility. To date, the mine has been connected to grid power, and the ongoing pumping from the underground mine also provides an abundant supply of process water to be used in future processing and mining operations.

“Limited development and rehabilitation activities took place at Kipushi throughout 2020,” says Watum. In the wake of COVID-19, mine development was temporarily suspended to reduce the risk to the workforce and local communities in March and in April 2020 the company announced cost-reduction initiatives to generate cash savings. The total budget of US$28.7 million for 2020 was focused on conducting care and maintenance activities, and to maintain pumping operations.

Shortly before production was suspended in 1993, Gécamines discovered the Big Zinc Zone at Kipushi, which, to this day, has never been mined.

“We have always held the belief that Kipushi had a lot more high-grade zinc, copper, and germanium than what was reported in 2011. After multiple drilling programmes, we expanded the zinc deposit in 2018 into what is currently the world’s highest-grade zinc project with a measured and indicated resource of 11.9 Mt grading at 35.3% zinc,” says Watum, adding that the mine also has a measured and indicated copper resource of 2.3 Mt, grading at 4.03% copper.

“According to an independent study by mining research consultancy group Wood Mackenzie, the zinc grades at Kipushi are over twice as high as the world’s next-highest-grade zinc project, Watum adds.

This updated mineral resource is being used in the preparation of the Kipushi definitive feasibility study (DFS), which will update and refine the findings of the preliminary feasibility study (PFS) issued in December 2017, which demonstrated that Kipushi can be brought into production at annual throughput of 800 000 tpa run of mine at a capital cost of US$337 million.

The PFS also demonstrated that Kipushi could produce an average of 381 000 tpa of zinc concentrate over an 11-year initial mine life at a total cash cost of approximately $0.48/lb zinc. Based on a zinc price of $1.10/lb, the project would have an after-tax net present value at an 8% discount rate of $683 million.

One of the key findings of the PFS was an optimised process plant design that was achieved through additional metallurgical test work and trade-off studies. The optimised plant would use dense media separation (DMS), followed by milling and a flotation plant. “With the addition of milling and flotation to the flowsheet, an overall recovery of 89.6% can be achieved at a concentrate grade of 58.9% zinc. This is a significant improvement compared to the plant design in the 2016 preliminary economic assessment (PEA), which could only achieve a concentrate grade of 53.0% zinc, and would enable lower concentrate transport costs, says Watum.

“The DFS for Kipushi is in the final stages of completion, and some aspects of the design have progressed into a detailed engineering phase. After completion of the DFS, Kipushi will be ready for construction, starting with the process plant,” Watum concludes.