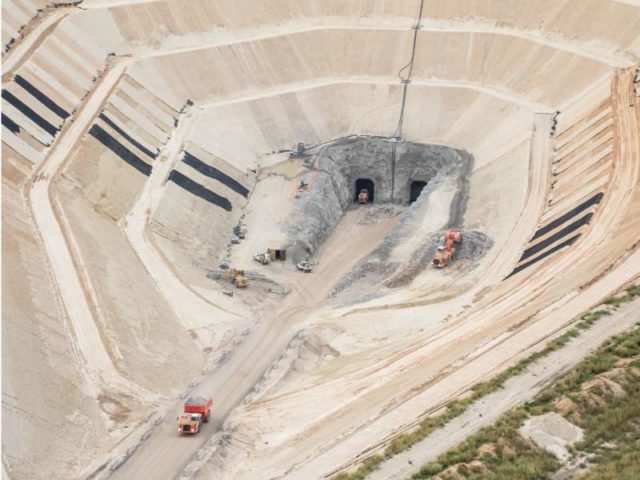 Not only will this project generate significant financial benefit to the company as it starts to generate revenue, enabling it to implement expansion plans, but it will deliver substantial economic benefit for the country as well, writes LAURA CORNISH.

The US$400 million, 100% owned Khoemacau copper project is situated on the Kalahari Copperbelt and forms part of a 4 040 km² land package that Khoemacau Copper Mining owns. It represents the start of what could ultimately be a widespread mining complex for decades to come.

“At present, we are focused on developing Khoemacau’s high grade Zone 5 resource – referred to as the ‘Starter Project’ which is aimed at producing first concentrate by mid-2021 and thereafter building up to its nameplate throughput of 3.65Mtpa producing +60 000 tpa copper and 2 Mozpa silver, with both payable metals in concentrate.

Based on resources of 92 Mt, delivering these volumes equates to a long operating lifespan in excess of 20 years,” says Chrisjan van Wyk, project director for Khoemacau Copper Mining.

Zone 5 comprises a measured, indicated and inferred resource of 92 Mt of copper containing high grade +2% copper and +21 g/t of silver.

The initial production targets however are just the start for the company. In the mid-term it aims to expand its production to over 100 000 tpa of copper and 5 Mozpa of silver in concentrate and in the long term up this even further to +150 000 tpa of copper and +6Mozpa of silver by developing further resources, with grades in excess of 2% copper, in the area including Zeta North East, Zone 5 North and Mango, along with a potential expansion of mining at Zone 5.

“Through the delivery of a large-scale, underground mechanised mine (the first in the country), Khoemacau will start to build a long-lasting legacy in Botswana,” the project director notes.

This was extended to include value engineering, optimisation, refinement of the capital costs, detailed engineering to support early works and a new level 3 schedule.

An estimate workbook was also produced which provided a detailed account of scope and costs for the various work breakdown structures.

To date, the project has reached 50% construction completion with engineering and design approaching completion. All equipment has been ordered and a number of long-lead critical equipment already has been delivered to site.

“The most significant achievement to date on the project has been the completion of the three boxcuts at Zone 5 and the commencement of underground mining development in each.

“The ore that will be extracted from underground will feed the Boseto processing plant which will produce concentrate (the revenue stream) that will be exported to global markets in 2021,” Picken outlines.

Several other notable milestones have also been achieved that support the mining effort.

These include the completion of the initial Zone 5 infrastructure (offices, workshops), diesel power generation and the overhead lines that distribute the initial power requirements on the mine site (prior to connecting to the national grid), a 40 km water pipeline that supplies borehole water to Zone 5, the occupation of the first phase of the permanent Zone 5 accommodation camp and the 35 km access road that links the neighbouring Boseto processing plant to Zone 5.

The existing Boseto processing plant, which formed part of the acquisition of the Boseto mining operation, which Khoemacau acquired out of provisional liquidation in 2015, is another critical path area. It is being upgraded with demolition, civil, structural, sand blasting and painting construction activities in progress.

Electrical and instrumentation works are ready to start.

“Once completed, the plant’s capacity will have been increased from 3 Mtpa to 3.65 Mtpa and will offer an enhanced flotation circuit, a new filtration plant, as well as refurbishment to the entire facility,” says Van Wyk.

Through the Boseto acquisition, Khoemacau also gained access to an existing tailings storage facility which will be upgraded as part of the Project and then utilised once Zone 5 is in production.

“Construction has progressed well across the widespread site and although impacted by COVID-19 pandemic spread reduction measures, construction has continued throughout the period of the Botswana lockdown with over 30% of construction personnel (+500) remaining and advancing construction,” Picken reveals. The Company also managed to keep all underground mine development activities on track through his period.

There are a number of components that must come together to facilitate first production from Zone 5, Picken continues.

“The first of these is completion of boxcut construction and surface infrastructure necessary to support mining, both of which have largely been achieved as well as the start of underground mine development at each of the three box cuts.

“The remaining areas to be completed prior to realising first concentrate include the completion of the haul road between Zone 5 and Boseto, building an ore stockpile, completing the Boseto plant upgrade and connecting the project to grid-supplied power.”

Achieving its milestones to date can be attributed in part to the close cooperation between Fluor and Khoemacau, Picken and Van Wyk agree.

“Khoemacau has been transparent in their execution approach and have worked in a close, collaborative and integrated manner with Fluor. We have been agile in our response and flexible in execution to ensure our client’s needs are met,” Picken highlights.

“The relationship shared between both companies has been one of trust, transparency, respect and mutual understanding, which is ultimately a winning combination,” he continues.

As of April 2020, in excess of two million consecutive safe work hours had already been performed on the Project without a lost time injury (LTI). At the time of going to print, Fluor was confident of achieving its next major target – one year without an LTI, which is set for July 2020.

On site, this has been achieved through dedicated focus and interventions from the Project management team and commitment from contractors, despite a lean staffing approach of a combined Khoemacau/Fluor construction management team, which has covered a widespread site that extends over 90 km.

“The expansion being studied by Khoemacau would entail the establishment of a new processing plant at Zone 5 and is already within our foreseeable future,” Van Wyk highlights.

“We are confident to achieve our goals of building a strong copper/silver presence in the country considering the excellent working relationship we have with the Botswana government as well as the various communities around the mine.

“This is a strong and economically robust project with great expansion prospects, which will deliver financial benefit to the company and of equal importance, to the people and government of Botswana,” he concludes.