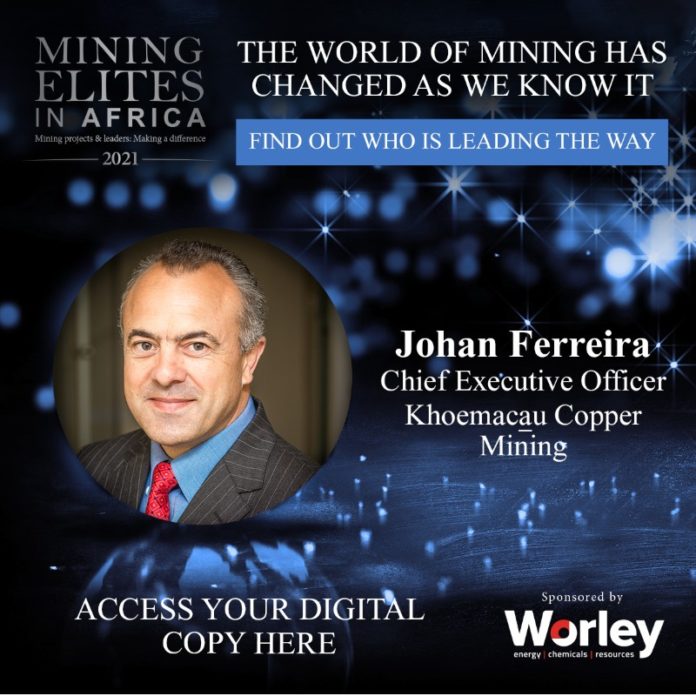 If one could identify a single individual as being the driving force behind the US$397 million Khoemacau copper/silver project in Botswana’s ‘Kalahari Copperbelt’, it must surely be mining veteran Johan Ferreira.

He has directed the development of the project since 2017 when he joined Cupric Canyon Capital, the project’s ultimate owner, as Head of Africa Operations.

He has since taken over as CEO of Cupric Canyon and is also CEO of Cupric’s subsidiary in Botswana, Khoemacau Copper Mining.

The groundwork for the project was largely completed before Johan became involved, with the design of the Zone 5 underground mine, which lies at the heart of the project, already at an advanced stage when he came aboard.

“During a difficult phase of the project, good work was done by Johan to get the financing in place.” – Andrew van Zyl

But there’s no denying that since then he has shown unflagging energy in pushing the mega-project forward, with the result that it is now well into construction with first production targeted for 2021.

One of Johan’s major achievements has been to secure the financing for the project, a long and complex task which came to fruition in February 2019 when Cupric Canyon and Khoemacau Copper announced the signing of a US$565 million funding package.

This allowed the project to be officially launched in mid-2019 by the President of Botswana, Dr Mokgweetsi Masisi, when a ground-breaking ceremony was held on site.

During Johan’s tenure, the project has become increasingly Botswanan in character, with operational control being exercised from Khoemacau Copper’s office in Gaborone and with Botswanan citizens well represented at senior management level.

the implementation and operation of the project. In keeping with this goal, Barminco, the mining services contractor on the project, has established a well-equipped and -resourced underground mining training centre in Maun.

Zone 5 will deliver 3.65 Mtpa of ore to the Boseto processing facility which will produce +60 000 tpa of copper and 2 Mozpa of silver (in concentrate). Johan has stated the company will deliver first concentrate towards the middle of 2021 and considering the project’s development performance this will likely happen.

He has also navigated COVID-19 with skill considering the project was in a critical development period in 2020. Despite a reduced workforce and the need to observe safety protocols, the company managed to keep the mine development on track and saw modest impacts on the process plant upgrade schedule.

Johan holds a Bachelor of Engineering (Mining) degree from the University of Pretoria and is a qualified and certified Professional Engineer. Prior to joining Cupric, he spent his entire career in the gold mining industry, working first for Anglo American’s Gold & Uranium Division and later AngloGold (which eventually morphed into AngloGold Ashanti).

He served as General Manager of the Moab Khotsong and Great Noligwa mines during the period 2005 to 2010 before being promoted to Senior Vice President Operations for the South African Region.

In 2012 he joined Newmont Mining as Regional Group Executive Operations in Accra, Ghana and 2014 was appointed Regional Senior Vice President – Africa Region, also based in Accra, a position which he held until 2016. During his stay in West Africa, he served as President of the Ghana Chamber of Mines.