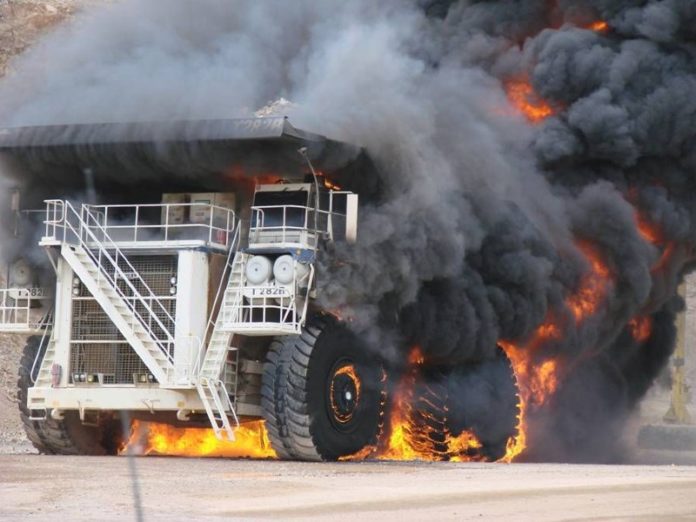 The potential fire hazards associated with electrical equipment poses a significant threat to any mining operation, but thanks to a new fire protection system, this is one hazard threat that can effectively be eliminated.

The Safety Solutions MicroFire Protection System, distributed by electrical components specialist Trysome Auto Electrical Engineering, is a personnel and asset safety-driven initiative which protects key assets from electrical ­fires and assists any fire-suppression system in minimising the damage caused by a mechanical ­fire by shutting down the machine completely.

The system acts as an early-warning alert for operators and mine managers of a pending fire due to an electrical short.

The MicroFire Protection System is triggered either by the­ fire-suppression system or an electrical short. Each system is set up against customised, pre-set parameters de­fined by the customer.

MicroFire Protection will monitor the current being drawn from the machine and if the system current is higher than the parameter settings the system will send out a visual and audible alert. The operator is warned, via the in-cab display, and any number of pre-de­fined individuals will receive an alert via the Telegram communication portal.

These alerts will identify the error type i.e., over-current or mechanical. A pre-set timer will begin the countdown to a complete, fail-to-safe vehicle shutdown, giving the operator enough time to pull the vehicle over and evacuate safely and without recurrent incident.

The MicroFire Protection System will switch off all current supplied from the battery, minimising equipment damage, and stay locked-out until an investigation has been done and any threat has been neutralised.

The system intelligently logs a history of all DC parameters for further analysis.

In light of ongoing fire hazards with its haul trucks, largely because conventional re-suppression systems cannot control electrical ­ fires due to the massive currents from the batteries the machines are operating on, a coal mine approached Trysome for a solution to its fire-hazard problems.

Trysome conducted extensive research and physical inspections on the machine fleet to establish the correct values to be used to furnish the ultimate product – a solution that works as a dual vehicle ­fire prevention system, that needs no human intervention, and that meets all safety requirements.

As there was no pre-existing product to deal with this type of hazard, Trysome developed and patented the Safety Solutions MicroFire Protection Electrical Shutdown System.

MicroFire utilises a pressure switch on the existing fire suppression system and a master control unit with a display that analyses the pressure on the fire suppression system, as well as the voltage and current on the machine to ensure a delayed shutoff of the machine for the operator to exit safely and to minimise asset damage without any human intervention (system is fully automated).

A very basic system was designed, manufactured, and ­fitted on a Hitachi haul truck in August 2019. Within a matter of weeks, the system triggered and saved the machine from an electrical burn. Upon thorough investigation, it was found that the starters on the machine were the main cause of activating the system as it had a short-circuit due to over-cranking, which, in turn, caused the positive lead on the solenoid to melt and arcweld to the engine chassis.

Without the MicroFire Protection System, the mine would have lost its asset and was so impressed with the outcome that it immediately ordered 13 units to be installed on all its excavators.