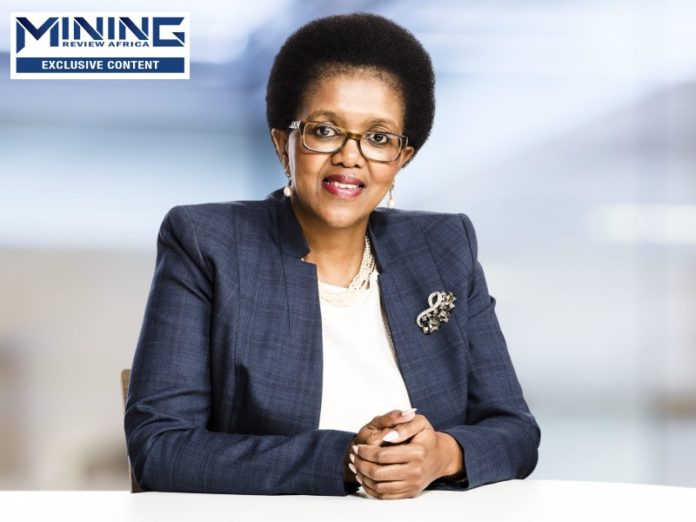 Corporate activist and business woman Nolitha Fakude, who is also a proud beneficiary of employment equity in South Africa, has a passion for leadership development, especially for women and black people in the workplace. In her many roles in South Africa’s mining sector over the past few years, she has become a respected authority on transformation and empowerment in South Africa, writes CHANTELLE KOTZE.

Having held several senior management and board positions at a number of blue-chip companies in the oil and gas, petrochemicals, financial services and retail sectors throughout her career, Fakude has more recently spent a number of years in the mining sector, where she currently serves as the chairperson of diversified mining company Anglo American South Africa’s management board.

Fakude, a former Minerals Council South Africa VP, was recently elected as the Minerals Council’s first female president in the 131-year history of the organisation, and also currently serves as chairperson of its Women in Mining Leadership Forum. Fakude’s appointment as the first woman president was described as a “watershed occasion” by Minerals Council CEO Roger Baxter, noting that it is testament to her fortitude and leadership capability.

Speaking at the virtually-held Junior Indaba in June, Fakude jokingly blamed organiser and host Bernard Swanepoel for her being in the mining industry as she served as non-executive director of Harmony Gold while under the leadership of Swanepoel, who was CEO at the time.

The Minerals Council and its member companies, through the launch of a Women in Mining White paper, published in March 2020 have undertaken extensive work to promote gender diversity and inclusion to ensure that women working in the mining industry have the same opportunities open to them as men – and that they are safe to pursue them.

The mining industry in South Africa has made significant strides in the number of women employed in the sector, which currently comprises about 53 000 women, or 12% of South Africa’s total mining labour force of about 450 000 people, compared with about around 11 400 women in 2002.

Despite an increase in the amount of women employed in the sector, a key focus of the Mineral Council’s Women in Mining Leadership Forum, which Fakude chairs, is focused on attracting even more women to the industry. To achieve this, the Minerals Council and its members are using the Women in Mining White Paper to implement strategies to overcoming the challenges that women in the sector face and on the advancement of women in the industry.

Fakude says the March 2021 appointment of Dr Nombasa Tsengwa as CEO-designate of Exxaro Resources, who was formerly Exxaro’s MD for minerals, is significant enough to hope that the country’s mining sector is on a mission to transform itself.

Although Fakude’s route to mining came via other industries, she says that each decision taken throughout her career was fuelled by the desire of wanting to be part of the decision-makers capable of making a difference in people’s lives. Fakude admittedly states that while she had no clear plan on how to achieve her goal of empowering people, she remained steadfast in her belief in the inherent goodness of people which was reinforced throughout her career.

She points to the enactment of South Africa’s employment equity legislative framework as having shaped her career, allowing her to benefit from more inclusive opportunities, and then allowing her to showcase her level of skills and competence and what she brings to the position. As a corporate activist for economic and socio-economic change for women in particular, Fakude says it’s difficult to ignore that women are still unable to achieve socio-economic empowerment.

Acknowledging the gender transformation milestone within the Minerals Council upon here appointment as its next, Fakude said that this moment must evolve into a movement. Only then will real change be able to take place and allow the economic and social status of women in mining and the communities in which mining companies operate to change, she says.

“This moment has shown that there is commitment form the mining industry to be part of the greater gender empowerment agenda,” says Fakude. In terms of diversity and inclusion, Fakude says this should not solely focus on representation but should also be about creating visible and felt upliftment of women and marginalised groups in the workplace and giving them the opportunity to be meaningful participants in the economy.

Building back better on new foundations

Fakude says thatwhile the mining industry has a real opportunity to assist with economic recovery post-COVID-19, it must find ways to factor transformation, empowerment, equality, diversity and inclusion into its strategies to ensure a sustainable and inclusive future.

Fakude says that she has endeavoured, on behalf of herself and her fellow Minerals Council colleagues, to build on the work that was started by her predecessors to ensure a sustainable future for the mining industry. “The people that have come before us and the events that have taken place have all brought us to this stage in our transformation journey,” said Fakude, noting that she is honoured to be carrying forward the baton.