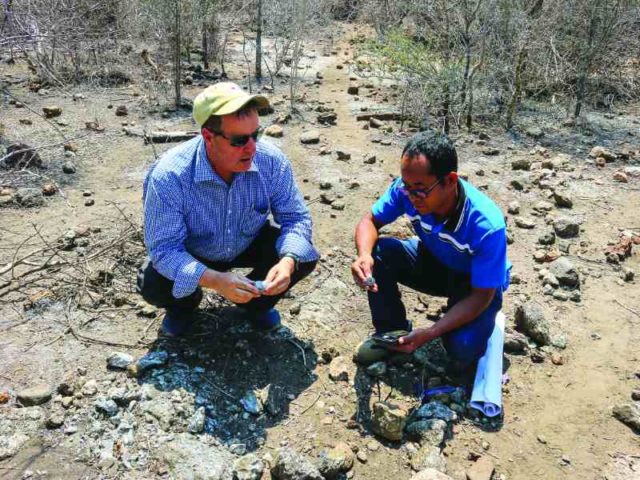 Since listing on the ASX last year, BlackEarth Minerals has been on an ambitious path to develop its Maniry graphite project in southern Madagascar.

In recent months, the company has received a cash injection, has reported that concentrate tests meet the specifications required for lithium-ion anode material manufacturing and has received the backing of the Madagascan government.

MD TOM REVY tells GERARD PETER why Maniry is perfect for producing the right commodity in the right jurisdiction.

With experience in the mining industry spanning more than 35 years, Revy is well suited to lead BEM’s flagship project. He heads a group of people with extensive experience in developing projects in Africa, specifically in Madagascar.

However, for now, BEM’s focus is developing Maniry.

Syrah Resources produces first purified spherical graphite in the US

Currently, in the feasibility phase, Revy explains that the company identified graphite as a key commodity back in 2016.

“Since listing we have completed a myriad of critical tasks, all culminating in the completion of an advanced scoping study one year later. With a US$103 million NPV (net present value), 42% IRR (internal revenue return) and a capital expenditure of just $ 41 million, Maniry makes good investment sense.”

Revy adds that previous exploration at Maniry revealed that it hosts a large-scale graphite mineralised system. Preliminary work on most of the defined targets has been completed and BEM considers the Maniry project to be at feasibility stage.

“What’s more, the area remains open to further discovery of potential very high grade material to the north west, meaning that Maniry has a long life with significant potential to expand,” Revy explains.

Following the advanced scoping study, BEM believes that Maniry will have a 10-year lifespan based on Indicated Resources only. During this time, it will deliver an average of 30 000 tpa during Stage 1 (years 1 to 3) and will ramp up to 60 000 tpa in Stage 2 (years 4+).

Revy states that BEM is confident that Maniry ticks all the boxes to be a success, not only because of the quality of the graphite but also because of future global market demands.

“Last year, results confirmed the presence of high-purity, ‘jumbo’ flake sized graphite. All flakes were also found to be free of any internal contaminants, confirming the high-quality nature of the graphite.”

Anode manufacturers in China have reviewed the full report, giving it the thumbs up for further testing to move forward. This shows that BEM is capable of attracting premium prices for use in lithium ion batteries.

“Then there’s demand for product. Independent reports show that the outlook for graphite demand, particularly in the battery and expandables markets is very attractive moving forward.

“We have already seen the demand for the right quality graphite suitable for battery use growing since 2013 and the outlook is that there is going to be a shortfall in demand from around 2022.

“Maniry is not only timed to be developed ahead of that time but the product that we will be producing will feed that market demand. Our plan is to commence commissioning in the last quarter of 2021, ahead of the time of what will be a very hungry graphite market.”

In addition to meeting the demand for battery metals, BEM has also identified two other key graphite markets it wants to exploit. The first is the highly lucrative expandables, particularly fire retardant building materials.

This market is forecasted to reach approximately $400 million by 2026. Other expandable areas include graphite foils and specialised gaskets. Another focus will be refractories where graphite is a mainstay component used in steel production and lubricants.

Government support and a cash boost

Maniry’s steady progress is further being helped by the favourable conditions existing where the project is located. Firstly, the majority of its Indicated Resource already sits in an area that already has been granted a 40-year mining lease.

In addition, when it comes to geopolitics, Revy states that Madagascar is a proven environment for resource development.

“The country itself already produces a wide array of mineral commodities including nickel, mineral sands and related products and of course graphite.

“When it comes to infrastructure, there is port availability with site to port roads largely in place and the project has low power demands for what I believe will be a simple mining process.”

Furthermore, in June this year Maniry received backing from the Madagascan Ministry of Mines and Strategic Resources, as the government understands the benefit the project will bring to one of the poorest parts of the country.

In a boost for development, BEM announced in September that it had received a cash injection after it successfully completed a placement that is set to generate $1.68 million for the company.

Revy explains that the funds raised will go directly towards fast tracking Maniry, including bulk trial mining, export of ore to a large scale pilot plant, a pilot trial, bankable feasibility studies as well as consultants and contractors, and working capital.

Currently, the company is already in offtake discussions with tier one companies.

“BEM has been listed for a very short time but during this time it has set itself very ambitious targets which many thought we will never achieve,” adds Revy.

“But we met them – in fact, the results achieved have even exceeded our expectations.

“As the company officially moves from explorer to developer, Maniry’s potential is extraordinary. The more we look, the more we find, the better the project looks. And our goal will remain the same: maintain our focus and fast track to cash flow,” he concludes.