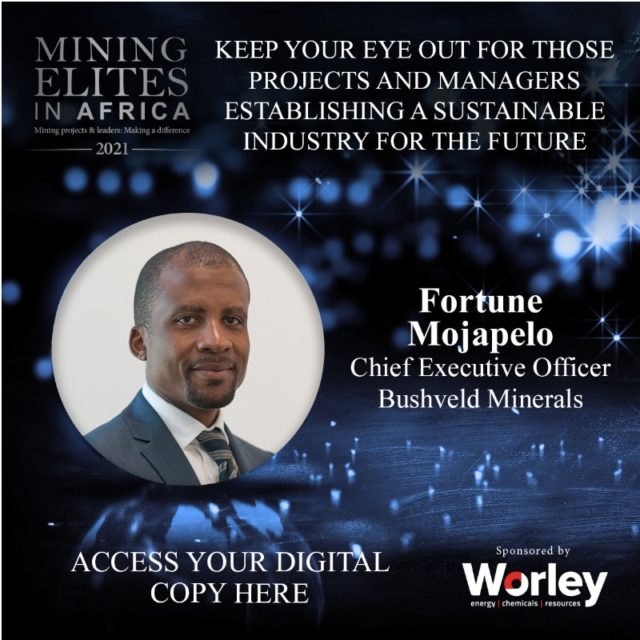 It’s difficult to imagine that Bushveld Minerals was once a cash-strapped junior, considering the company’s seamless transition to a major vanadium producer with ambitions to grow into one of the world’s most significant, lowest cost and vertically integrated vanadium companies.

The company’s CEO Fortune Mojapelo has been at the helm of the transition and vision for growth.

Analysts are predicting a surge in demand for battery energy storage technologies and the subsequent demand for the metals and minerals that go into the manufacture of these technologies.

“Fortune is a man to be watched given his focus on energy minerals. He is likely to have a great impact on the mining industry going forward.” – Jonathan Veeran

The use of vanadium, not only in steel manufacture but also in the production of vanadium electrolyte used in vanadium-based energy storage systems known as vanadium redox flow batteries (VRFBs), is set for a bright future on the back of these predictions.

The company’s target is to organically grow vanadium production to more than 8 400 mtVp.a. in the medium term.

One of Fortune’s major achievements has been co-founding the Bushveld Energy subsidiary with CEO and co-founder Mikhail Nikomarov and the development of the company’s strategy in establishing this business as a key player in the production, sales and leasing of vanadium electrolyte – the highest value component of VRFBs.

Bushveld Energy is also looking to invest in the construction of an assembly plant to assemble and manufacture VRFBs as a critical next step in the process of accelerating Bushveld Minerals’ growth into the battery storage market in South Africa.

Under Fortune’s leadership, the company acquired Vanchem, a Brownfield primary vanadium processing plant with a broad range of vanadium products.

This is a noteworthy acquisition giving the company the platform to grow its production base almost threefold over the next five years, to become one of the largest primary vanadium producers in the world.

The acquisition has many advantages in addition to the significant greater processing capacity for the group: including flexibility to scale up based on market demand; a diversified product range; and the opportunity to unlock its Mokopane resource much sooner and at a fraction of the capital cost envisaged in the 2016 pre-feasibility study.

Fortune is a mining entrepreneur and founding shareholder of VM Investment Company, a principal investment and advisory company focusing on mining projects in Africa.

He has played a leading role in the origination, establishment and project development of several junior mining companies in Africa. Fortune graduated from the University of Cape Town with a BSc (Actuarial Science).

He was previously at McKinsey & Company where he worked as a strategy consultant on corporate strategy and organisational development in several sectors in South Africa and Nigeria.