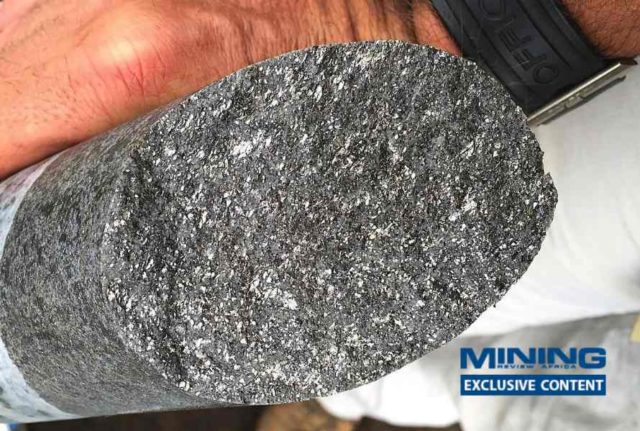 When ASX-listed Black Rock Mining set out to develop its Mahenge graphite project in Tanzania, it did so with a long-term view of creating a sustainable mine that will add significant value to the country’s economy.

And with a 26-year life of mine and one of largest JORC-compliant flake graphite resources globally, MD and CEO JOHN DE VRIES is confident that the company can deliver on its vision, he tells GERARD PETER.

Black Rock currently has a 100% interest in Mahenge. The project is spread across 324 km2 of exploration tenements in Tanzania’s central Ulanga district, 450km from the country’s commercial centre, Dar es Salaam.

It is one of the world’s largest graphite resources with 212 Mt at 7.8% TGC (total graphite contained), and a reserve of 70 Mt at 8.5% TGC.  The company’s enhanced definitive feasibility study (eDFS) projects a four-stage construction schedule to deliver up to 340 000 tpa of 98% graphite concentrate for 26 years.

According to de Vries, Mahenge’s high graphite concentrate is as a result of its unique location.

“Mahenge is on top of a mountain.  This is unlike most graphite deposits which are found in low lying areas.  These deposits experience a secondary mineralisation effect, meaning fluids pass through these ore bodies and this fluid adds in other minerals such as vanadium, sulphur and iron.

“We had a very dry system at Mahenge so there is minimal secondary mineralisation and this geology allows us to achieve a remarkable 98% graphite concentrate,” he explains.

De Vries has over 35 years’ experience in the mining industry and has held several operational and strategic roles.  However, despite his immense experience, he states that developing a graphite project is very different to more traditional projects such as gold and base metals.

“Firstly, when the graphite boom took off about four years ago, nobody had really heard of the industrial mineral but when the electric vehicle (EV) market started taking off, everybody “charged” (no pun intended) into graphite,” he explains.

“Three years later we have found that graphite is not rare; there is plenty of it. This is evident by the sheer amount of discoveries that have been made in a short period of time.

“What is apparent is that it is not the availability of a graphite deposit but rather the properties of the concentrate that comes off that deposit that is rare.  Mahenge’s clean cheomistry and large flake bias places us in the very rare class”

De Vries also adds that not much is known about the ideal way to develop a successful graphite mine.

“We don’t know a lot about graphite mining because there has effectively only been two projects in the Western world in the last 10 years, so there isn’t a large knowledge pool about the right way to develop a graphite project.  Also, the first movers in this space used the gold and base metal mentality to get them started and as it turns out, that is not the right approach.

“A graphite project is different. You need more than grade, you need volume as well.  Typically you need to produce a series of fairly large samples which are sent to your intended customers.  They will manufacture it and hand it to their customers and this goes to various customers all the way down the value chain.

“The feedback will eventually come back to us and then we adjust our settings and send another sample; you keep doing it until the sample is right.  Painful at first, but once you are over the wall, the process becomes a massive barrier to entry.

“What this means from a plant design and set-up point of view, is that there is no such thing as a ramp-up in graphite production; you either make a product that meets specification on day one, or you are producing waste.  It does make it challenging to develop a project this way, but if you have secured customers, you have secured your project lifeline.”

Following the DFS, Black Rock ran a 90 tonne pilot plant that produced 7 tonnes of sample material which it sent to 22 potential customers, where the company garnered enough interest.

“Our potential customers were surprised and didn’t really believe that we were able produce 98% concentrate so they wanted to see how we did it.

“So, we ran a second pilot plant in China and took concentrate to a number of customers, including POSCO, a large South Korean industrial company who is a major player in the global lithium-ion industry.”

The relationship between Black Rock and POSCO was further solidified in June when the two companies signed a strategic alliance and development Memorandum of Understanding that will see the development of Mahenge.

According to the agreement, once Due Diligence is complete, POSCO could make an initial investment of up to US$10 million to fund a program of engineering works including design, completion of contracts and early site access to establish a construction-ready site by the end of the year.

POSCO then has the option to make a second investment for project construction in exchange for a long-term offtake arrangement for up to 100% sub #100 mesh concentrate.  This is expected to be up to 40 000 tpa at full production rates for Module One at Mahenge.

Mahenge is about 60 km from the Ifakara Railway Station which is on the Tanzania Zambia Railway Authority (TAZARA).  This is a bi-national railway linking the southern Africa regional transport network to the seaport of Dar es Salaam.

According to de Vries, Black Rock will be able to truck concentrate to a custom-built freight terminal.  The concentrate will be containerised and sealed inland and put on a train which will take it to the port of Dar es Salaam.

“This is a massive advantage for us.  Dar es Salaam is heavily congested so to be able to load concentrate onto a train and take it directly to a wharf and onto daily shipping service going back empty to Asia gives us a significant cost advantage and allows us to manage our working capital,” he adds.

In addition, the project is about 4 km from the village of Mahenge.  This means that there is a potential available workforce that is not far from site.  As such, Black Rock will not have to build workers camps on site, thereby saving money and supporting local involvement through jobs and opportunities for small businesses.

De Vries is intent on ensuring sustainability at Mahenge which will ultimately benefit the country. This includes a plan to allow Tanzanians to head up the project.

“Once all four modules of the plant are operational, we will be in position to create almost 1,000 local jobs.

“Also, Mahenge will ensure that US$3.6 billion of value is delivered to the Tanzanian economy over its 26-year lifespan.  So, sustainability is fundamental – we have to play the long game and that is to upskill the local team,” he concludes.