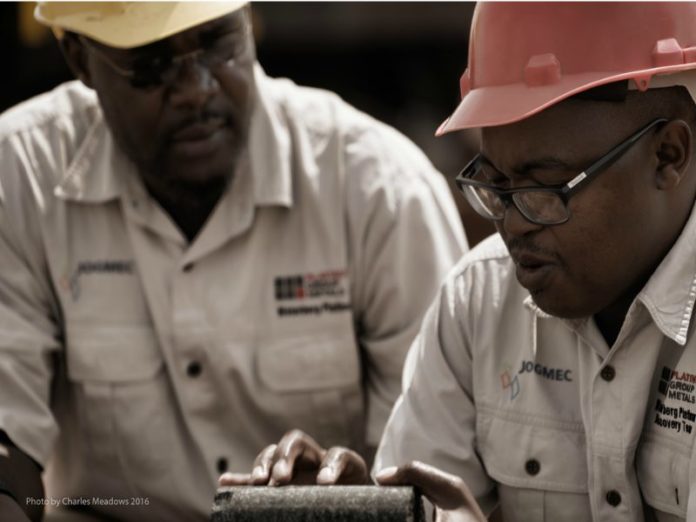 The long-term market fundamentals for palladium remain robust thanks to strong demand on the back of a continued supply deficit.

In a shareholder webcast hosted in mid-May, Jones presented an update on the project’s development, in which he noted that the South African Department of Mineral Resources and Energy should grant the mining right for the Waterberg Joint Venture project during June.

This latest milestone follows the completion of the definitive feasibility study (DFS) in September 2019, which was approved by the JV partners in December.

In February 2020, the Waterberg JV partners approved an amended purchase and development option agreement which would see Impala Platinum (Implats) fund the full R55 million implementation budget and work programme, aimed at increasing confidence in specific areas of the Waterberg DFS while awaiting the expected grant of a mining right and environmental authorisation. This is currently in progress.

As it stands, PTM owns 50% of the Waterberg JV, with Japan, Oil, Gas and Metals National Corporation (JOGMEC) holding a 12% interest. The Waterberg JV is further supported by a group of investors including Impala Platinum (Implats) holding a 15% interest, diversified Japanese trading house Hanwa holding 9.7% and South African empowerment partner Mnombo Wethu Consultants holding the balance of the joint venture.

Upon the granting of the mining right, Implats has 90-days to decide whether to increase its 15% stake (and first right of refusal to its concentrate offtake) to 50.01% by buying an additional 12.195% equity interest from JOGMEC for US$34.8 million and earning a further 22.8% interest by making a firm commitment to spend $130 million on development work.

Following Implats’ funding decision in Q3, 2020, the Waterberg JV would begin decline establishment in Q1, 2021, with potential start of concentrate production in Q1, 2024, reaching a steady state of production rate of 420 000 ozpa of palladium, platinum, rhodium and gold (4E) platinum-group metals (PGMs) by 2027, over a 45-year mine life.

“The resource thickness, and its shallowness (starting at 140 m below surface) makes the deposit amenable to bulk mechanised mining, allowing the resource to be accessed via lower-cost decline shafts as opposed to vertical shafts.

“This also allows the operation to move away from conventional, high-cost narrow reef mining, where economic and safety pressure in recent years has been forcing the closure of these types of mines,” says Jones.

The bulk mechanised mining nature of the deposit positions the Waterberg JV project at the bottom of the PGM industry cost curve, with an estimated all-in sustaining cost of $767/oz 4E.

The Waterberg resource also has a unique metal balance in that it is dominated by palladium, and also contains platinum, rhodium and gold as well as copper and nickel.

The deposit also has low chrome content with similar amount of base metals to other concentrates in South Africa – making it a good Merensky reef replacement capable of being fed into most of South Africa’s smelters.

A strong time for palladium

Palladium has continued to outperform its biggest rival – gold – to become the most precious of the precious metals.

In mid-May, the metal traded over the $2 000/oz mark since the COIVID-19 pandemic lockdowns (after hitting a record high of $2 800/oz in February) on renewed optimism about China’s economy reopening and planned stimulus for vehicle manufacturers.

Palladium demand has been primarily driven by the automotive industry and the metal’s use in the manufacture of emission-reducing catalytic converters.

While the global automotive industry shut its doors in response to the COVID-19 crisis, so too did palladium production in South Africa (which accounts for about 38% of global mine supply) come to a halt, explains Jones.

As a result of this correlation in the halting of both production and demand, analysts are forecasting balanced or continued deficits in 2020, with deficits expected to grow in the near-term and the long-term.

Despite its relative rarity, mined mainly as a by-product of nickel and platinum mining, palladium is the dominant and most abundant of the PGM’s within the Waterberg metal basket, which comprises 63% palladium, 29% platinum, 6% gold and 2% rhodium.

“The possibility of creating additional demand for platinum and palladium in the battery technology space is an exciting development and of strategic importance to both parties,” says Jones.

While the current view of the automotive sector is that the cost of using PGMs in a battery is too expensive, Jones notes the importance of calculating and weighing up the cost of current battery material inputs (nickel, cobalt, manganese) used in current batteries.

While similar in cost, the real value lies in the weight saving – as a fraction of PGMs, when compared with other battery materials, is required, he explains.

The research being undertaken within Lion Battery Technologies aims at using platinum and palladium to unlock the potential of lithium-air and lithium-sulfur battery chemistries to increase their discharge capacities and cyclability.

Research to date has shown that the use of PGMs as a catalyst in these batteries has been able to prevent some of the issues that reduce a battery’s cyclability.

“We are most advanced with our research into lithium-sulfur battery chemistry and have filed additional patent applications for this particular technology,” says Jones.

While still at laboratory-stage, this technology development holds significant upside potential for PTM.

“Should EVs become an important part of the vehicle market, palladium could become a crucial input in the manufacture of this battery technology,” says Jones.