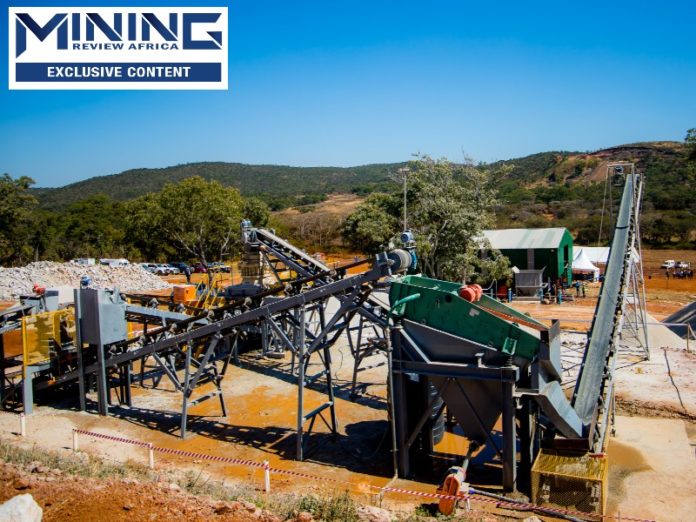 Prospect Resources has been resolute in its goal of defining a clear pathway to becoming a near-term, high-purity lithium producer.

What sets the company’s 87%-owned Arcadia lithium project apart from its peers is the dual commodity opportunity that exists, which could see the company’s high-purity petalite and spodumene concentrates enjoy premium market pricing, over and above recent price increases on the back of widening long-term lithium deficits, MD SAM HOSACK tells CHANTELLE KOTZE.

Lithium, which has the highest electrochemical potential of all metals, has become highly favoured as a key raw material in the manufacture of lithium-ion batteries for use in the burgeoning electric vehicle and energy storage market.

However, of equal importance is the wide range of uses that lithium and its chemical compounds have in industrial applications, resulting in numerous chemical and technical uses including glass, ceramics and industrial alloys manufacture.

Having acquired the Arcadia project in 2016, Prospect Resources has undertaken extensive metallurgical test work programmes on Arcadia’s ore body, given that it contains petalite (containing 4% lithium oxide) in addition to the more commonly produced spodumene (containing 6% lithium oxide), to ensure that it is able to deliver the highest product quality with the most optimised, efficient and de-risked recovery pathway.

Important to note is that although the petalite contains a lower lithium oxide concentration than spodumene, technical-grade petalite sells at a premium to chemical-grade spodumene in today’s market, owing to its niche yet very material market, providing Prospect Resources with two extremely valuable lithium products, Hosack highlights.

Prospect Resources’ focus throughout 2021 was on the successful construction, commissioning and commencement of production at the Arcadia pilot plant, a major milestone toward near-term lithium production, which it achieved on schedule and within budget on 25 June 2021.

According to Hosack, the aim of the pilot plant allowed the company to substantially reduce the metallurgical risk at Arcadia, while also demonstrating the company’s ability to successfully operate in Zimbabwe, providing the market with increased confidence in the technical and economic study work outcomes.

Having produced high purity technical grade petalite concentrate samples from the pilot plant, Prospect Resources has shipped the petalite concentrate to both of its offtake partners global industrial minerals company Sibelco and Chinese mining investor Sinomine Resource Group for on-delivery to customers across Europe and Asia. These parties are planning to use the samples in their respective production runs to undertake product qualification processes through the second half of 2021.

Meanwhile, spodumene concentrate samples have also been produced (with a partner laboratory in South Africa) for supply to, and potential qualification with, strategic groups across China, Japan and Europe, with whom Prospect Resources has been engaged with and whom have an interest in spodumene concentrate offtake and assisting with the development of Arcadia.

Securing a pathway to developing Arcadia

Prospect Resources is now focused on demonstrating its high purity products by passing product qualification processes with customers, demonstrating Arcadia’s economics through the completion of an optimised feasibility study, and lastly, by securing a clear, low-risk pathway to develop Arcadia.

“The optimised feasibility study is being advanced on a dual-track basis to asses both a single-stage and two-stage development pathway for Arcadia,” Hosack explains, noting that study aims to optimise the flowsheet and design of the process plant and associated infrastructure a higher level of accuracy for both development cases, building on the technical assessments undertaken in the 2019 definitive feasibility study (DFS).

The two development pathways under evaluation through the optimised feasibility study process are a two-stage development to 2.4 Mtpa throughput, via progressive construction of two 1.2 Mtpa modules, which provides a lower upfront capital pathway to production and allows project and market risks to be managed progressively; and a single-stage development to a 2.4 Mtpa throughput operation, which provides greater development efficiencies and higher economic returns, but with higher upfront capital requirements.

“Although the 2.4 Mtpa pathway is preferred should favourable market conditions and accessible funding allow, retaining optionality on both development pathways will enable Prospect Resources to execute the pathway that generates the best outcome for the company on a fully-funded basis,” says Hosack.

According to the company’s 2019 DFS results, on a 2.4 Mtpa base case development, Prospect Resources’ average spodumene concentrate production is expected to be approximately 173 000 tpa while its average petalite production is estimated at 122 000 tpa over a 15.5 year life of mine at an estimated cost of US$162 million.

This makes Prospect Resources the largest global petalite producer, a significant spodumene producer and places Arcadia in the top 10 global hard rock lithium projects in the world, in terms of size and grade, with a large scale JORC-compliant mineral resource of 72.7 Mt grading at 1.11% lithium oxide (LiO2) and 119 ppm tantalum pentoxide (Ta2O5).

According to Hosack, based on insights from industry analysts, the lithium supply base will need to double between now and 2025, and double again between 2025 and 2029, in order to meet growing lithium demand and fill the growing supply gap.

On the back of a tightening lithium market, which is creating increased urgency for customers to secure lithium raw material, Prospect Resources is in a strong position as one of only a few shovel ready projects globally.

In parallel to completion of the optimised feasibility study for Arcadia, the company has been in discussions with its existing offtake partners and institutional financiers
with respect to financing the development of Arcadia. Hosack says Prospect Resources is also in early-stage discussions with multiple strategic partners regarding joint development or partnership structures.

Having received multiple enquiries from a range of international parties in relation to funding and development of Arcadia and following the review of various funding options for the development of Arcadia, Prospect Resources, in August, opted to fund the project through a partnership process as it provides more flexibility and the ability to accelerate project execution and bring the Arcadia into production as early as possible.

“This will provide us with a structured process whereby interested parties could put forward partnership proposals in a competitive environment to fully fund the Arcadia project and will enable us to find the right long-term partner for the funding and development of Arcadia,” Hosack concludes.