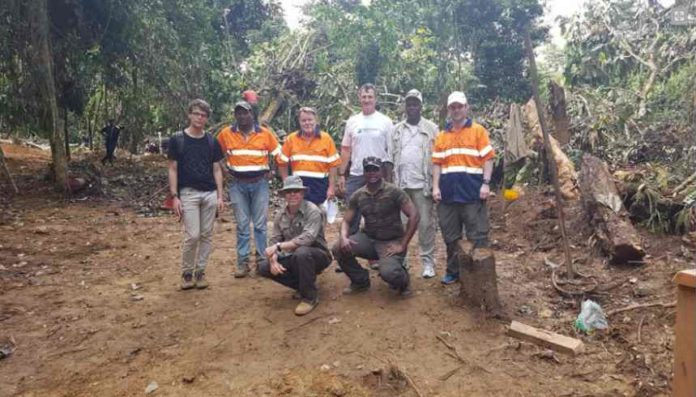 North Kivu Minister of Mines, Electricity, Small & Medium Enterprises, Industry and Hydrocarbons, Minister Professor Anselme Paluku Kitakya has expressed his support for the Alphamin Bisie tin mine project and the value that the project already brings to the Walikale territory in North Kivu in the Democratic Republic of Congo (DRC).

He welcomed the prospect of increasing the North Kivu tin production and in the country.

“Alphamin Bisie tin mine will double the DRC’s exports of tin by 10 000 tons a year,” he states.

An example of such value includes the building of the Luuka Primary School at Logu-walikale, substantial upgrade of the region’s roads and the provision of cell phone connectivity to the area.

Through the Lowa Alliance, 115 development projects are partially financed by a percentage of the Alphamin Bisie tin mine operational expenses.

[quote]The diversification of the local economic activity, mining of minerals and regional economic growth the operation holds have been welcomed.

“Alphamin has the best tin ore-body in the world, in a commodity with solid future prospects, managed by an experienced team, supported by well capitalised investors, who are astute industry specialists, in an area with abundant resources that is poised for rapid economic growth,” explains Boris Kamstra, CEO of Alphamin.

Kamstra explains that progress at the project is on track and the development is about to enter the underground construction of the industrial mine development.

“The Bisie tin deposit is one of the largest and most significant tin deposits in the world. Construction activities commenced in Q3, 2017 and first production of tin in concentrate is anticipated in Q1, 2019 while the mine is anticipated to reach steady state production towards end of 2019,” explains Kamstra.

Kamstra says that unlocking the potential of the mine holds local and international benefit.

“Future tin supply is globally uncertain as tin inventories are running low and economically viable tin reserves are being depleted. The International Tin Research Institute has forecast that there is likely to be a global shortfall of tin commencing in 2018,” he explains.

There are a limited number of active industrial scale tin mines outside of China and Indonesia and the majority of other new projects face significant technical, financing and other challenges, in addition obtaining the required permits to build new mines remain complex.

“In explaining the significance of tin mining for global industry, he says that tin mining companies should attract increasing interest from the owners of consumer brands and their manufacturers, who use tin in their products (laptops, mobile phones and cars).

“Consumer companies will need to secure future supply. The Bisie tin deposit is one of the largest and most significant tin deposits in the world – providing the ideal foundation to build a premier tin producer on,” states Kamstra.

Alphamin is expected to deliver a significant return to investors through the full range of expected tin prices.

Under the updated feasibility study the net present value of the investment in Bisie amounts to US$402.2 million and the internal rate of return is 49.1%.

The Alphamin operation is the manifestation of what conflict mineral legislation aimed to achieve.

Responsible procurement is the order of the day and the normal way of working at the Alphamin Bisie tin mine project.

“Alphamin is already the largest local employer in the region and adding value to the area through job creation, construction, connectivity and development of economic infrastructure,” says Kamstra.

The project is already a catalyst for regional economic growth and holds more positive promise for years to come. Alphamin is committed to contributing to the stability and economic activity in North Kivu.

“Alphamin, with its Bisie mine, contributes significantly to benefit the community and other stakeholders alike. Local communities strongly support the development of the project, as it will create employment and facilitate the development of supportive infrastructure in North Kivu.

Local community support is further enhanced through the Lowa Alliance, a not-for-profit foundation that drives comprehensive and ongoing economic and social development, which is funded by Alphamin Bisie tin mine, donations and the local communities,” says Kamstra.

However, he stresses that a lot is being done to overcome these challenges by working with industrial mining companies like Alphamin.

“We created a special committee to support the development of the Alphamin tin mine at Bisie, the CAIMB, which includes 27 DRC Government divisions and ministries.

“We also supported and co-led the anti-fraud investigation and reform of the implementation of the CNLFM/P which focused on eliminating fraud of Alphamin Bisie tin mine minerals to maintain integrity of conflict-free supply chains, peaceful migration of ASM miners to legal and viable sites,” says the minister.

According to the updated feasibility study, the responsible development and operation of the Alphamin Bisie tin mine is expected to result in the employment of approximately 700 people during construction, and to create approximately 450 permanent local jobs during operations.

“The catalytic nature of Alphamin’s commitment to and investment in the post-conflict region of the eastern DRC will brings synergies with the other humanitarian, stabilisation and development funding and initiatives of the GDRC and multiple donors,” he says.

Alphamin is a proud subscribing participant in the voluntary principles on security and human rights, recognizing the importance of the promotion and protection of human rights and the constructive role business and civil society can play in advancing these goals.