”The reserve growth at Twangiza has been achieved through the proven ability of the current plant to economically process non-oxide materials existing within the reserve pit shell. This achievement will extend the mine life of the current installed operations to 14 years, and provide a foundation for future optimization and the possible future expansion of the existing Twangiza operations,” Banro CEO and president John Clarke commented.

During 2014, the company scaled down its exploration activities at its Twangiza, Namoya, Lugushwa and Kamituga projects and focused its geological expertise on supporting the production growth at Twangiza, development at the Namoya Mine and identification of near mine high grade targets.

In order to consolidate Banro’s position on the various exploration sites, some limited exploration activities are planned for 2015 using small teams focused on generating new oxide targets in Lugushwa and Kamituga.

At Twangiza, delineation drilling will be focused on near mine oxide resources generation on the Twangiza East and West mineralisation.

The underground mineral resources at Kamituga are those situated below the Mobale open pit, estimated using historical underground information at a cut-off grade of 1.5 g/t gold. The mineral resource estimates for Kamituga were prepared by SRK Consulting (UK) using historical data. These estimates have not been updated. Banro has since 2011 carried out extensive exploration including some amount of drilling to verify the historical results at Kamituga. Further work planned, especially drilling work to update the Kamituga resource, was deferred as the focus shifted to mine development at Namoya and the process plant expansion at the Twangiza mine.

Below are the key assumptions, parameters and methods used to estimate the Twangiza, Lugushwa and Namoya mineral resources:

Drill cores for assaying were taken at a maximum of one metre intervals and were cut with a diamond saw with one-half of the core placed in sealed bags and sent to the company’s sample preparation facility in Bukavu, DRC.

The core samples were then crushed down to minus 2 mm, and split with half of the sample pulverized down to 90% passing 75 microns. Approximately 150g of the pulverized sample was then shipped to the SGS Laboratory (which is independent of the company) in Mwanza, Tanzania where the samples were analysed for gold by fire assay using a 50g charge. As part of the company’s QA/QC procedures, internationally recognized standards, duplicates and blanks were inserted into the sample batches.

Drill core samples were respectively taken from Lugushwa, Namoya, Twangiza East and West to determine relative density measurements for the various deposits and the oxide, transitional and fresh rock components.

The proven and probable mineral reserve of Twangiza has increased by 59% to 1.64 Moz (22.38Mt @ 2.28g/t Au) from 1.03 Moz (13.69Mt @ 2.34g/t Au) (December 31, 2013). This 59% increase is comprised of net mining depletion, discount on bulk density, artisanal mining voids and an increase in reserves as a result of the proven ability to process by blending the portions of the non-oxide ore within the reserve pit using the upgraded Twangiza plant.

A reconciliation exercise carried out under the supervision of SRK recommended a revision of the bulk densities of the top 15m material in the Twangiza Main and North pits, from an average of 2.05 t/m3 to 1.80 t/m3 and 1.89 t/m3, respectively. Due to the extensive degree of weathering and artisanal mining, a further 19.5% discount was applied to the overall bulk densities of the measured component of the Twangiza Main pit. These modifications were not captured in the Feasibility Studies published in July 2009.

Top Project stories in the DRC:

Banro reports its highest gold production yet in DRC 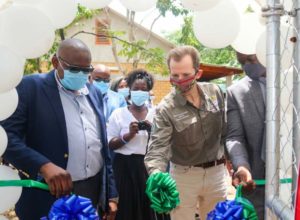