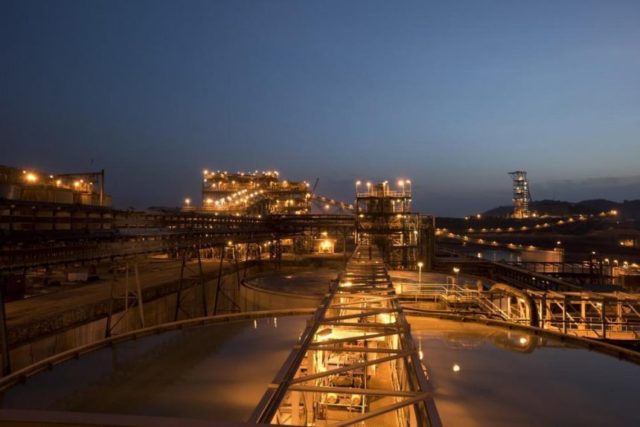 The Kibali gold mine in the DRC has continued its performance improvement in the second half of the year after a tough first half.

Mark Bristow, CE operator and part-owner Randgold Resources, said metallurgical process enhancements had improved the recovery rate, the new Kombokolo and Rhino satellite pits had added flexibility and throughput for the year was above nameplate.

Grade would remain a challenge until the underground mine was fully commissioned later in 2017.

“At the same time the team has kept all Kibali’s capital projects on track. The Ambarau hydropower station is being commissioned and will start generating power within a matter of weeks, while work has begun on Azambi, the mine’s third power plant, which is being built entirely by Congolese contractors.

“Construction of the underground mine is also on schedule and the commissioning of its shaft system in the third quarter of this year will complete the development of the Kibali complex,” Bristow said. He noted that Kibali was funding its own capital expenditure and had started paying back shareholder loans.

“Kibali still has to contend with some critical issues, however, notably the delayed payment of the TVA refunds owed to it. While government has agreed to the refunds and has made some payments, the recent political difficulties in the country have distracted the administration from the settlement of these issues and the amount outstanding had increased at the end of 2016.

“The situation is exacerbated by the foreign exchange risk posed by the continuing depreciation of the Congolese franc, and we trust it will be resolved now that the political transition has been settled. Notwithstanding the challenges we have faced, the mine and the provincial government have made good progress in developing a ‘grand plan’ for economic development of the region.”

On the community front, Kibali’s palm oil project initiative has been revised and is ready to proceed on a phased basis. It is envisaged that the project, for which Kibali will supply seed capital, support and sponsorship, will eventually employ as many as 15 000 people.

Another substantial agribusiness venture, the maize project, is also progressing and its pilot farm has demonstrated that it is possible to harvest twice in a single year.

In 2016, Kibali invested more than US$2 million in local development projects, with a strong focus on education. A school ownership campaign, designed to engage parents in the education of their children, was successfully initiated at schools in the Kokiza, Durba and Watsa villages. Likewise, a number of proud Kokiza homeowners were recognised in the annual pride of ownership competition.

Randgold also progressed its interests outside the Kibali joint venture with the completion of a regional geophysical survey of the Ngayu belt and the start of follow-up fieldwork at the Moku project adjacent to Kibali.

With the regional mapping and stream sediment survey now complete, a number of targets with strong mineralisation in bedrock have been identified and the focus is now on evaluating and prioritising the various targets ahead of any drilling campaign.