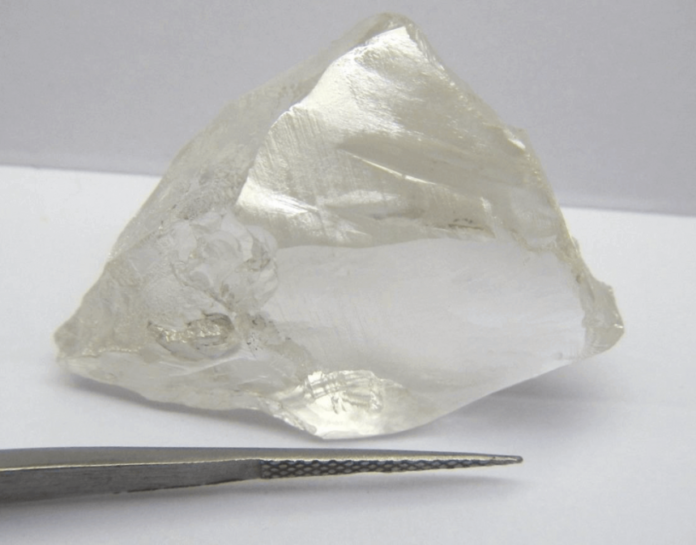 Lulo alluvial mining company Sociedade Mineira Do Lulo (SML) – of which Lucapa is a 40% owner and the
operator – achieved record plant throughput volumes of 70 967 bulk m3 in Q1, 2017, an increase of 91% on the previous corresponding period.

Significantly this record was achieved during the Angolan wet season that finishes in the current quarter.

The increased plant throughput resulted in a 33% increase in diamonds recovered to 4 098 carats.

Lulo continued to regularly produce large and premium-value diamonds throughout Q1, with the number of specials (individual diamonds weighing more than 10.8 carats) increasing 58% to 38.

These specials included Angola’s second biggest diamond on record – a 227 D-colour Type IIa gem – along with other large gem-quality stones weighing 92 carats and 62 carats and a 65 carat diamond.

The record volumes came as Lucapa and its partners continued to explore for new mining blocks at Lulo along the Cacuilo River while access to known large stone-producing mining blocks 8 and 6 was largely restricted during the Angolan wet season.

While the thicker diamond-bearing gravel seams delineated at mining block 28 contributed to the record volumes, the gravel was a lower grade. This resulted in a 30% reduction in grade to 5.8 carats per 100 m3 and a 15% reduction in the average size per stone to 1.2 carats.

Mining operations will continue predominantly at mining block 28 during the current June 2017 quarter until ground conditions permit safe access to mining blocks 8 and 6 as the Angolan wet season finishes.

SML’s unsold diamond inventory stood at 2 545 carats at 31 March 2017 after diamond sales totalling US$10.7 million occurred during the quarter. Subsequent to the quarter, SML sold a further parcel of 1 919 carats for gross proceeds of $2.5 million.