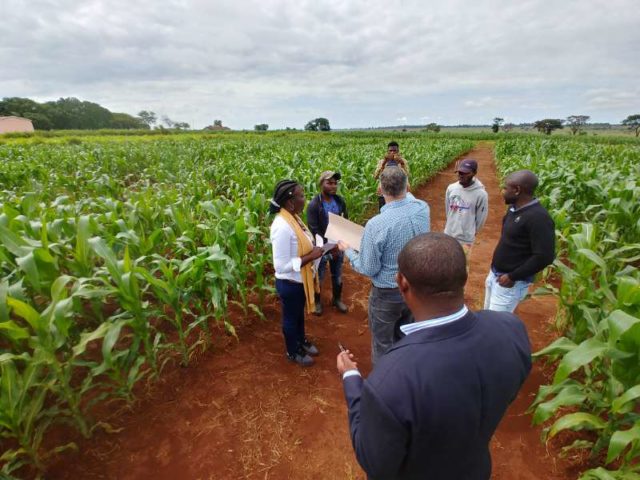 Through its Cabinda phosphate project in Angola, ASX-listed phosphate developer Minbos Resources, is in the early stages of building a nutrient supply and distribution business with the aim of stimulating agricultural production to promote food security within the country and the broader Congo Basin.

With 44% of Angola’s 30.8 million population employed in agriculture, having a locally mined, manufactured and distributed fertiliser product, will have a significant impact on the central African region, whose economy and population is reliant on agriculture, CEO LINDSAY REED tells CHANTELLE KOTZE.

According to the African Development Bank, raising the productivity of agriculture enterprises through increasing crop yields has not been adequately promoted as an important food security strategy in Africa.

Apart from commercial agriculture, which covers a relatively small share of crop production compared to that of subsistence farming, the use of agricultural inputs – such as improved seeds, inorganic fertilisers, insecticides and pesticides – has been much lower in Africa than in other parts of the developing world.

Moreover, the use of agro-chemicals and/or integrated pest management techniques to deal with plant diseases and pests is still largely confined to export crops.

Minbos believes the use of agricultural inputs, such as fertilisers, can help transform agriculture into a business for many subsistence farmers in Africa and aid in reducing local food prices, enhancing current and future food security and improving Africa’s economic competitiveness.

A report by the World Bank noted that quality seeds, fertilisers and agriculture equipment are out of reach for most Angolan farmers, with the availability of fertiliser is cited as the single biggest constraint on yield growth.

The other constraint on yield growth is the ability to produce a locally manufactured fertiliser with small-medium-scale producers currently constrained by the high cost of imported fertiliser.

Echoing these sentiments, Reed notes that logistics costs and limited domestic production meant low fertiliser use in Middle Africa had resulted in crop yields that were significantly below that of other regions.

He believes that producing low-cost, locally-mined, manufactured and distributed fertiliser, tailor-made for local soils, could drastically change this picture in future.

“Producing fertilisers locally would improve the availability of nutrients, reduce transport costs and would protect against exchange rate fluctuations which impacts on fertiliser pricing,” says Reed.

Moreover, African governments are seeking to reduce reliance on imported food and NGOs are promoting the use of modern agricultural inputs such as fertilisers among subsistence and small to medium-scale farmers.

A project in Africa, for Africa

Minbos originally acquired the rights to the Cácata deposit (which hosts the Cabinda phosphate project) in Angola through a 50:50 joint venture (JV) partnership in 2010.

During this time, more than US$20 million was invested in exploration and a pre-feasibility studies to produce an export focused product. During the period, the company acquired extensive technical knowledge on phosphate projects throughout the Congo Basin.

After a failed merger by the two parties in 2016, the JV partnership was terminated in 2018 and the rights to the deposit were terminated and the licence forfeited by the government. Despite not having any ownership interest, Minbos continued to push ahead with agronomic research and development programmes for the Cabinda project.

In June 2019, the rights to the Cácata deposit opened to a public tender, and following a very competitive tender, Minbos was successful in winning back the rights, which Reed believes was largely a result of the agronomic research that the company has and continues to undertake.

According to Reed, the Cácata deposit has the potential to produce a low-cost/high-yield fertiliser blend suitable for crops and soils within Angola and the wider Congo Basin.

Minbos plans to mine phosphate rock from the Cácata deposit and transport it to the Porto de Caio about a 60-minute drive along a dual-lane highway from site where all the necessary electricity, gas, water and shipping infrastructure exists to build and operate a 20 tph granulation plant to produce enhanced phosphate rock granules, comprising phosphate rock and mono-ammonium phosphate (MAP).

The enhanced phosphate rock granules will become the phosphorous (P) nutrient feedstock, which will be blended with imported nitrogen (N) and potassium (K) granules to form an NPK blend that meets the exact specifications suited to Angolan crops and soils, explains Reed.

The project is progressing quite quickly and the company is underway with the definitive feasibility study for Cabinda.

Mine planning consultancy Oreology, has been appointed to designed to generate a robust mining strategy, which includes producing an ore reserve estimate, mine schedule and stockpile design, mine infrastructure design as well as cost modelling.

This work, to be completed by August, is important for the mine approval process in Angola and will assist Minbos with its ongoing discussions around the mining investment contract with the government and will allow the company to move straight into the mining phase of the project.

Site engineering work, detailed design of the granulation plant and ordering of long lead items as well as base line environmental study surveys will begin this month and will be completed by Q1, 2021.

The Cácata deposit contains a mineral resource of 27 Mt grading at 17.7% P2O5 (phosphorus pentoxide) in the measured, indicated and inferred categories. This includes a higher grade ‘scrub and screen’ resource of 13.1 Mt grading at 26% P2O5 in the measured and indicated categories – 7 Mt of which exceed 30% P2O5 and which will be exploited as part of the Cabinda project.

Despite being a relatively small-scale deposit, the 7 Mt of P2O5 is almost half a century worth of phosphate nutrient when compared to the country’s current phosphate use, explains Reed.

This is however dependent on the environmental approvals and the shipping of the long lead items, expected to take between 24 – 36 weeks, which remain the largest area of uncertainty.

With fertiliser consumption on the African continent set to grow 79% by 2030, reaching 13.6 Mt by 2030 compared to 7.6 Mt currently, many international fertiliser companies have recognised the incredible growth and population trajectory of Africa.

Minbos is working in partnership with the International Fertilizer Development Centre (IFDC), one of the world’s leading fertiliser research and development organisations, on developing an innovative fertiliser product that is tailored to meet the growing agricultural demand of Middle Africa.

The IFDC identified that the Cácata phosphate rock has medium solubility and can be enhanced by the addition of a small amount of MAP to be useful as a phosphate nutrient.

Together they have successfully processed and produced over 500 kg of Cabinda phosphate rock blended with MAP, known as the Cabinda Blend, at the IFDC’s trial plant in Alabama, USA, which was used in a number of in-country greenhouse and field trials.

Four greenhouse trials with the IFDC over two year have been completed and confirmed that the Cabinda blend returned similar agronomic performance to more expensive water-soluble phosphate imports, in crops and soils typical for Angola.

Moreover, the greenhouse trials demonstrated the potential for the Cabinda blend to have a greater economic benefit than previously understood with second and third crops revealing a residual effect from the initial fertiliser application – which would boost the economic potential of the Cabinda Blend.

In-country field trials in Huambo designed by Plant Nutrition Science and Technology (NPCT) in Brazil and co-ordinated by the Angolan Institute of Agronomic Investigations (IIA), are ongoing, the crops (maize) have been harvested and the crop yields are being weighed.

The objective of this trial was to prove the effectiveness of the Cabinda blend in Angolan field conditions. Field trials for the next growing season (beans) are being planned in collaboration with NPCT, IFDC and the IIA to compare the Cabinda blend to commercially available fertilisers.

To further optimise the Cabinda blend and ensure its suitability to Angolan crops and soils, the company has again engaged the IFDC to complete an advanced greenhouse trial.

The greenhouse trials, to be undertaken at the IFDC campus in Alabama, have the potential to enhance the value-in-use of the Cabinda blend and improve the project economics.

The trials have been designed to evaluate the Cabinda blend in local soils on soybean-wheat-sorghum crops grown in sequence to maturity to test several research comparisons including:

“Previous greenhouse and field trials have proved to be an important and independent measuring stick for the agronomic potential of Cabinda phosphate rock,” says Reed, noting that blend testing will be in the range of 75% phosphate and 25% MAP blend in a 5:1 ratio.

Going forward, Minbos Resources will consider the addition of micro nutrients to the Cabinda blend depending on the requirements of the crops in the Congo Basin. Testing will soon begin to determine the best micro nutrient requirements for the best crops.

Despite being a relatively small project, the Cabinda project has the ability to stimulate the downstream agriculture input sector and promote food security in Angola and the greater Congo basin now and into the future.