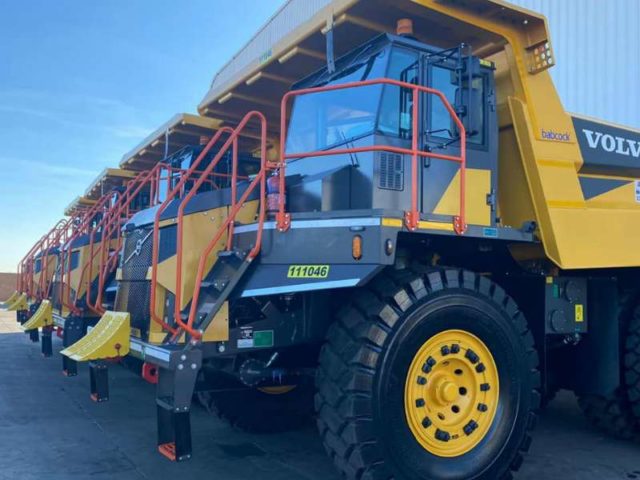 Quintin O’Reilly, equipment sales representative for Babcock, says that Atlantis Mining’s recently purchased eight new Volvo R60D rigid haulers are the first to be sold in South Africa, and will be put to the test in rugged opencast coal mining conditions.

The first four Volvo R60Ds were handed over to Atlantis Mining on 14 July 2020 and are already in operation at a colliery where they are being used primarily for the removal of blasted rock and hard overburden, with the remaining four haulers to be delivered in October this year.

“The R60Ds will complement our existing fleet of Terex and Volvo Construction Equipment, among them Terex TR60s and a number of Volvo A40F and A40G articulated dump trucks,” says Atlantis Mining MD Mark Johnstone.

Atlantis Mining’s longstanding relationship with Babcock dates back to 2000 when the company was appointed as the sole distributor for Volvo Construction Equipment in southern Africa.

Over the past two decades, and following the acquisition of Terex Trucks by Volvo Construction Equipment in June 2014, the alliance between the two businesses has been firmly cemented, primarily through Babcock’s extensive experience and customer-focused approach as well as Atlantis Mining’s appreciation of Terex, and subsequently, Volvo trucks.

Volvo’s range of D-Series rigid haulers at a glance

The new Volvo R60D rigid haulers stay true to their TR60 Terex Trucks roots in design principles, but include Volvo updates and modifications in line with Volvo’s exacting brand standards.

“The machines haul more tons per hour, due to their combination of power, tractive force, comfort and productivity-enhancing systems. This means our customers can meet production targets faster and boost the profitability of their business,” he explains.

Johnstone believes the Volvo R60D to be the most cost-effective, reliable, rigid truck on the market that is also simple to maintain and operate.

“Nothing comes close to the rand per ton yield of the R60D, and any minor issues can be quickly fixed without the need for specialised training,” says Johnstone, adding that when serious breakdowns do arise, a Babcock technician is always readily available to see to the problem.

The Volvo R60D haulers are designed to perform and are engineered to move material faster and more efficiently with heavy-duty hauls to cut cycle times.

Safety features strongly on the new R60D and is built into every design aspect, with ROPS (rollover protection structure)-certified body canopy, visibility and unrestricted access to all essential service points.

The three new Volvo D-Series rigid haulers supplied by Babcock – the R45D, R60D and R70D – are all based on the well-proven Terex Trucks TR-Series, and cover payload capacities from 41 to 65 t.