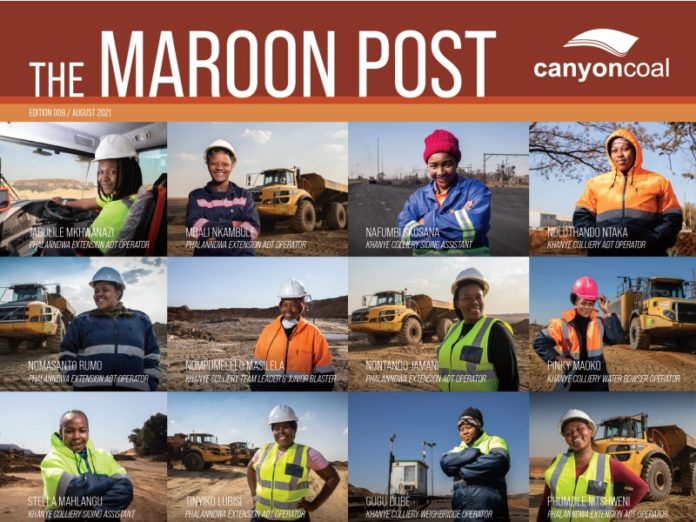 At Canyon Coal (as of the end of May 2021), we had 79 female employees accounting for 26.5% of our workforce, with 28 in core mining positions and 23 in mining support services positions.

In honour of Women’s Month in August 2021, we spoke to some of the women –  many of whom are also mothers – from our Khanye and Phalanndwa mines. They shared their experiences of working in the mining sector. They also offered advice to colleagues in the sector as well as aspirant women miners.

From the Coal Face

Khanye Colliery Weighbridge Operator Gugu Dube (33) states: “The work we do is vital to ensuring that customers receive the correct tonnages that they ordered. Every ton matters. Men and women are equally important and valued at Canyon. Being a woman in the mining sector is great.  I would like to grow with Canyon Coal and I am determined to move through the ranks of the company and one day be in top management.”

Phalanndwa Extension ADT Operator Jabulile Mkhwanazi (32) says: “The men on the team accept and support us female operators. I’m proud to be an ambassador for women in mining because it gives me great pride in showing that we can operate heavy machines just as well as our male colleagues. I can say that as women we can do anything in life, nothing can stop us!”

Phalanndwa Extension ADT Operator Mbali Nkambule’s (25) advice to women in the mining sector is that they should work as a team, and if they feel unsafe then they must report it and always work hard because she believes that women can do anything men can do.

Khanye Colliery Siding Assistant Nafumbi Skosana (41) believes it’s important to have a good attitude. “Mining is good for women because any woman can participate. Women don’t just have to be administration staff in an office, they can work anywhere in an operation.”

Nompumelelo Masilela (23) is a team leader and junior blaster at Khanye Colliery. She started studying Civil Engineering but encountered a couple of challenges when it came to drawing because she developed tremors in her hand during the course.

“My father and I then looked around at alternative careers options and we thought mining was a good one. Initially, it was heart-breaking to not pursue Civil Engineering, but I got over it quickly. The experience has been quite amazing here. I’m really enjoying mining and I would like to study further now,” she enthuses.

Nompumelelo remarks that some women who look at the mining sector from the outside and say it’s not for them as all they see is dirt and dust, but there is so much more to mining.