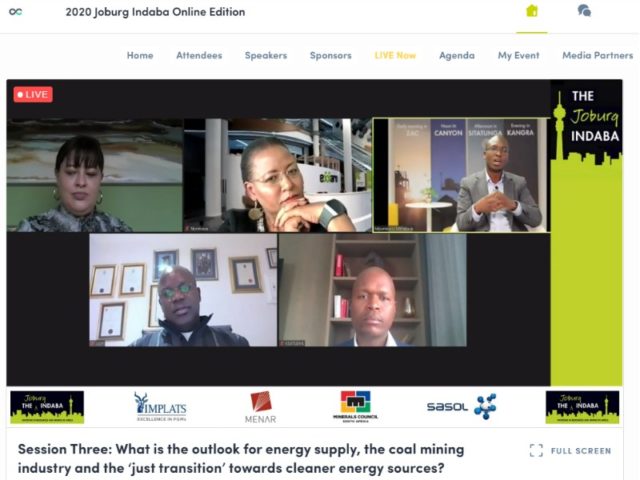 Speaking during a panel discussion with other coal industry stakeholders, as part of the virtual Joburg Indaba, on 8 October 2020, Mpumelelo Mkhabela, chairperson of mining investment firm Menar, called on coal producers to do their part in improving transparency and accountability in their relationship with Eskom.

Mkhabela said a code of ethics should regulate contractual arrangements that ensure commercial viability to both the supplier and purchaser of coal – not one at the expense of the other, resulting in public harm.

Implementation of an ethical code would bring many benefits for Eskom, including increased levels of transparency and accountability.

“The coal sector has been under attack. Coal has earned a bad reputation in South Africa largely because it has become associated with load shedding.

“As an industry we need to assist Eskom by providing it with coal at fair prices in a reliable manner in the interest of the economy. This will also improve the sector’s reputation.”

He said coal producers should consider conducting a socio-economic impact study to show the benefits of coal mining.

“If we looked at the total contribution of coal producers in terms of social labour plans, local economic development plans, local procurement opportunities as well as employment, the economic significance of coal mining and would become very clear.”

Mkhabela said a “just transition” to cleaner energy generation must include usage of cleaner coal technologies.

“The government should consider a policy position that promotes research and development to develop those technologies to enable South Africa to benefit from its coal endowment in an environmentally sustainable way.”

He reaffirmed Menar’s support for Eskom’s CEO Andre de Ruyter’s commitment to procure coal in a robustly competitive manner. Mkhabela stressed that coal producers should also do their part by helping Eskom to make sure that it’s commercially viable and is able to purchase the latest clean technologies for its power stations.

These technologies include carbon capture and storage systems. “If we don’t support Eskom, we will be shooting ourselves on the foot,” he said.

Although Eskom’s Kusile power station is using wet flue gas desulphurisation technology to reduce emissions, some of the utility’s power stations need to be upgraded.

For this to happen, Mkhabela said, “Eskom needs to be commercially viable and coal producers should assist by supplying it at reasonable prices.”