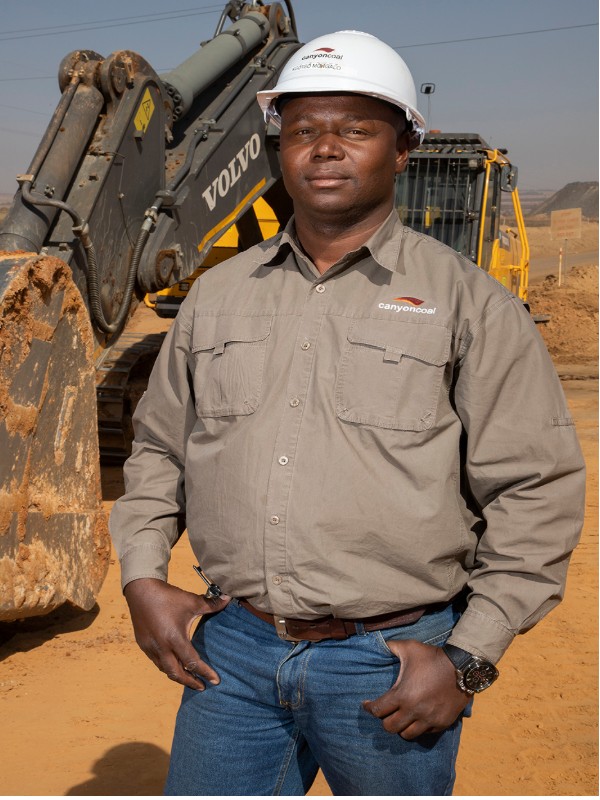 Kgotso Mongalo (49), assumed the position of Acting General Manager for Canyon Coal’s Khanye and Phalanndwa collieries along with Ukufisa Colliery in mid-August 2020 owing to the general managers having been booked off due to illness.

He ran the three collieries with stellar fortitude for several months until they returned to work.

Kgotso says it was a challenging period for him and a steep learning curve.

“I believe it’s much better to start with great challenges, then at the end of the day you know that things will run smoother over time. The experience that I’ve gained has made me a better manager for sure.

“I didn’t get an opportunity to sit with both General Managers to discuss what had to be done, but just had to work that out for myself.”
When the General Managers fell ill suddenly Kgotso had to step up quickly and take on their responsibilities.

“By working together with all the teams at the mines he managed to pick up quickly from where they had left off, “working as a team is very important to ensure a mine is well run,” he states.

The day Kgotso took over he called all the heads of the teams in the morning to say to them that, “Guys it’s not only me, it’s about all of us. If the mines are to continue to reach their targets, it will be because all of us worked together. It’s the only way we’re going to win.”

He credits Canyon Coal Chief Operating Officer Kobus Rothmann for playing a big role in supporting him and offering advice and guidance on all matters. Kobus had said to him:

“Anything that you need, or any help that you require, please just give me a shout.”

He understood that this would be a steep learning curve for Kgotso.

“It was crucial receiving the full support of the top management of Canyon Coal during this time as it showed they have great confidence in me and my abilities.”

Kgotso is no stranger to how Canyon Coal’s mines operate, having been with the company for over 13 years serving in various positions and most recently as the Mine Manager at Khanye Colliery.

He says that a General Manager position is a major step up, as one needs to now look at a broader picture of the mine beyond the pure mining side of the operation, as you are now responsible for the whole ecosystem of the mine.

“I’m very happy about this achievement as this was my second month at Phalanndwa. Previously, in May both Phalanndwa and Khanye achieved new production records so the pressure to keep up the momentum was huge.

Khanye maintained production output of around 200 000 tons of ROM, in line with the mine’s targets. Moreover, the plant at Phalanndwa was consistently able to wash 120 000 tons, which was a record for the washing of coal at Phalanndwa Extension.

“I believe the most important thing is to understand each other and communicate clearly. If everyone is on the same page then I believe goals can be reached everywhere in the operations,” he concludes.

*Kgotso Mongalo has been appointed as General Manager: Mining Operations responsible for Phalanndwa Extension and Ukufisa collieries effective for 1 February 2021.