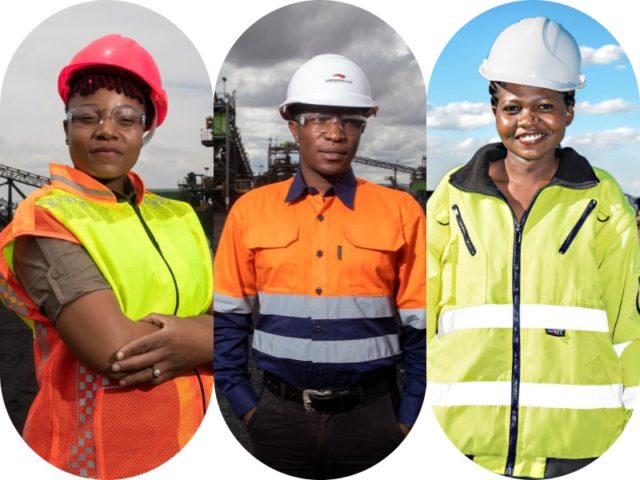 Three Canyon Coal bursary alumni reflect on their growth from their days as students to full-time employees. They talk about the opportunities they have received and the progress they have made in their careers to date.

“My career with Canyon Coal started while I was still a student when I was awarded a bursary. My aspirations were always to further my studies as I am a career orientated individual.

“I have always had an interest in engineering and physics and the bursary I received from Canyon Coal was crucial to enabling me to study what I enjoy.  The Canyon Coal Human Resources Manager at the time, Sarie Opperman played a big role providing me with emotional support, as being in university comes with its own challenges.

“She arranged regular progress meetings, which were held at the Canyon Coal headquarters, in Sandton to check up on my progress and general challenges that I was facing and always offered guidance and support. After completing my studies, I did my Experiential Training (P1 And P2) at Hakhano Colliery in Middelburg for a year (July 2014 To June 2015).

“In 2017, I started my internship at Phalanndwa Colliery as a Junior Engineer Intern under the supervision of the General Mine Manager and Engineer on the site (January 2017 to November 2017).

“Then in December 2017, I was transferred to the Procurement Department at Phalanndwa Colliery where I was appointed as a Stores Clerk and this is the position I currently still hold.”

Brian Gwaze engineering his own success

“Going to university not only brought hope to my family but also gave hope to my village as a whole. They witnessed for themselves that it was possible to achieve your dreams irrespective of how disadvantaged your background was.

“When I received my bursary from Canyon Coal, I had exhausted all our family’s financial resources and owed the university tuition fees. If it were not for the bursary, I would have been forced to drop out and disappoint many people looking up to me. The bursary was the sole reason I managed to graduate as a Mechanical Engineer.

“The bursary covered all my varsity expenses from registration, tuition, accommodation, books and included a stipend. Then Canyon Coal Human Resources Manager Sarie Opperman invited me for guidance and counselling at the end of each semester at Canyon Coal’s head office. The sessions were effective since she paid attention to my specific situation and did not just offer generalised advice.

“The company would also provide all the documentation needed for registration and accommodation, thus ensuring that the whole process ran smoothly. After graduating, I was offered a job at Canyon Coal. I have worked as an Engineering Workshop Foreman and am currently a Junior Engineer at Khanye Colliery. My next goal is to become a competent GCC Certified Mine Engineer.”

Nthabiseng Ocia Mueti was appointed as Social and Labour Plan (SLP) Manager on 1 October 2020. She is responsible for implementing existing and developing new SLPs and Local Economic Development (LED) projects. Nthabiseng is a Canyon Coal bursary alumnus, who has been with Canyon Coal since 2017 having worked both on site and at head office in various positions.

She has previously worked at Singani, Khanye, Ukufisa and Phalanndwa collieries as an Environmental and SLP Officer and later was appointed as a Compliance Officer at head office. Prior to being appointed to her current position Nthabiseng served as a Junior Project Manager in the Canyon Coal Project team.

She holds a Diploma in Mining Engineering and a Blasting Certificate. Nthabiseng is passionate about empowering women, which is why she co-founded the organisation When We Women Rise (WWWR) to expose and empower young women to pursue careers in the mining and industrial sectors.