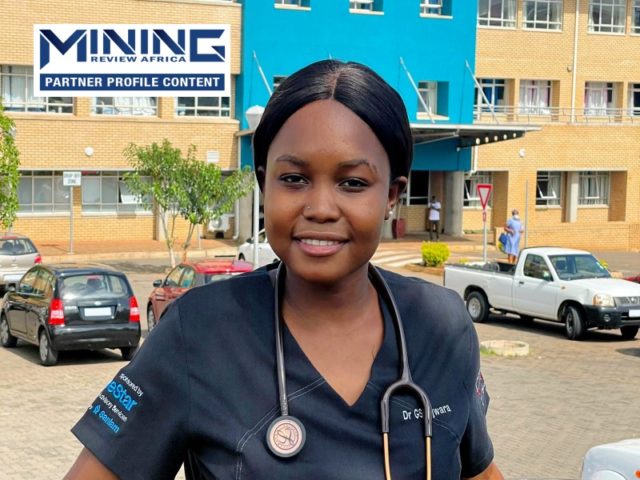 She completed her degree in November 2020, and took her official Hippocratic Oath during a virtual ceremony on the 11th of December 2020.

We spoke to her while she was serving her medical internship at Queen Nandi Regional Hospital’s Paediatric Department, in Empangeni, KwaZulu-Natal during the height of the second COVID-19 wave in South Africa.

“The mine that made my medicine dream come true”

Gugulethu journey to becoming Dr Mjwara has not been without its challenges. Born in a small town in the Zululand District of KwaZulu-Natal to a large underprivileged family, with little means meant money was always tight.

Gugulethu matriculated in 2013 from Vryheid High School. Her application to the University of Pretoria to study medicine was rejected. However, she was accepted to study chemical engineering.

“I then discovered in my first year an extended programme that gave me a pathway into medicine and decided to go for my passion,” she recalls. That path way was a BSc programme into which she enrolled 2014.

“I came in the top six of my residence and received a Golden Key because I was also in the top 10 of my faculty. I was then accepted into the medical programme at the University of Pretoria and commenced my medical degree in 2015,” she states.

Gugulethu worked extremely hard. So much so, that she was exempted from sitting for examinations; her test scores were good enough.

In 2018 Gugulethu had reached her fifth year of studies at university and had accumulated student debt of about R190 000, raising the real prospect of being kicked out of her medical studies programme

“It was really hard for me and frequently I wasn’t able to study because of the thoughts of me being financially excluded.”

It was a lot to handle for young person, the fear of financial exclusion would always envelop Gugulethu. Until she was made aware of Zululand Anthracite Colliery (ZAC) a mine located in her home district of Zululand in KwaZulu-Natal, which offered bursaries to deserving local residents.

ZAC, owned by private investment company Menar, provided bursaries to students who had done well at school and university level but couldn’t afford to further their studies as well as matriculants.

Gugulethu was the kind of a candidate ZAC was looking for. She applied and received the bursary on the strength of her needs and academic merits and became the first medical student ever to be awarded a ZAC bursary.

“It was really a miracle, as I found the ZAC bursary in the middle of my academic year. It was a massive relief for me. I want to thank Menar Group Human Resources Manager Mrs Sarie Opperman.

“She has really been a pillar of strength and support for me as a bursary holder,” she recalls.

“I remember that I would send her messages every time I would get an allowance, I would send her an email to thank her for considering me for this bursary because she did so much for me in making my dream come true.”

Gugulethu points out that the ZAC bursary scheme did not only covered tuition fees, accommodation, textbooks and provided her monthly stipend, but it also helped her settle historical debt.

Sarie explains that Gugulethu received the bursary based on her consistently good results during her university career.

“Additionally, during the bursary application interview, Gugulethu not only highlighted her excellent academic record, but explained that she wanted to become a medical doctor to champion the rights of women’s health and become a symbol to other women and girls in her community that they too could become medical doctors,” Sarie says.

“The awarding of bursaries is an important part of our mandate and commitment to supporting community through educational development. Gugulethu’s story is testament to the fact that bursaries can have life changing impacts on not just individuals, but whole families and communities.”

Gugulethu says that the average day as a medical doctor in paediatric unit is beautiful but also intensely busy.

“You need to put a smile on your face because you deal with little patients who are going through a lot emotionally and physically. Mothers worry about their little ones who are sick and you want to try your best to assist.”

Understanding the fear, the parents have of admitting their children into a hospital with everything going is very stressful for parents, the children and medical practitioners alike.

Working 24–48-hour long shifts is draining physically and emotionally, but Gugulethu points out that the greatest thing that brings a smile to her face every day is when she walks into the hospital and realising that she is actually living her dream.

Despite the challenges of long hours and the fear of Coronavirus, which has also added to the amount of work; the hospital’s primary concern remains taking care of the children inside the hospital and making sure that the children don’t need to return back to the institution.

“God really pulls us through and my message to others who faced similar challenges to me would be, to stay true to themselves, and to love themselves from within, and to heal in every way possible.

I also want to thank ZAC for all it has done for me to ensure my dream has become a beautiful reality and to thank my family and friends for all the support I have received from them over the years,” Gugulethu concludes.

Is sustainable mining not a contradiction in itself?