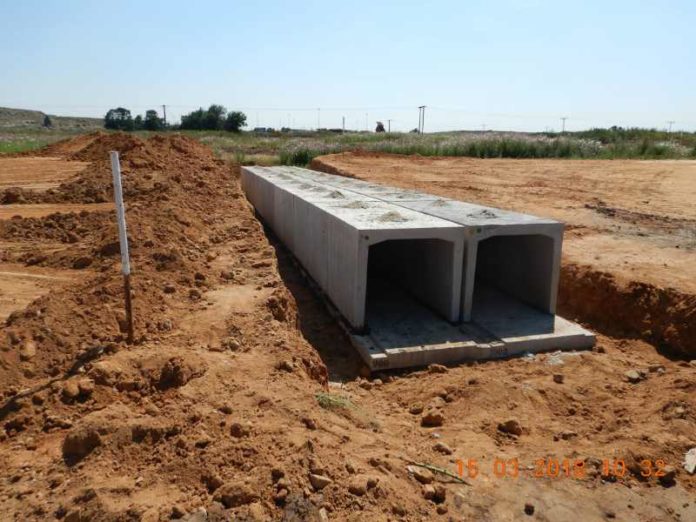 The 6 km section of the provincial road R50 and 6 km district road that services the nearby silica and quartzite mine, Thaba Chueu mine, were redirected in only eight months.

Notably, this was at least two months ahead of the fast-track construction schedule, despite rainy weather and other circumstances that led to unforeseen delays.

JG Afrika was appointed by Exxaro Resources to provide engineering design and construction supervision services for the project.

The firm has nurtured a long and proud working relationship with this diversified mining house having successfully completed many infrastructure projects for the client at its other operations.

Seasoned JG Afrika resident engineer, Theunie Visagie, has worked on many of them and, with an impressive track record in successfully delivering roads, storm water and water infrastructure for the mining industry, was nominated by the firm as the ideal candidate to oversee the demanding construction programme at Leeuwpan mine.

“Both the contracting and engineering teams were working to an extremely tight deadline with very little room for error. Our client needed to access the additional 5.1 Mt of coal reserves by the end of 2018 to avoid closure in 2019.

However, delays in obtaining a wayleave from the relevant provincial authority delayed the start to what was initially intended to be a 14-month construction programme.

By the time that it received the necessary approvals, the contractor had also been appointed, and the mine simply could not afford further delays,” Visagie says.

Working closely with the client, a decision was taken to incorporate precast-concrete base slabs for the 11 000 m of prefabricated culverts that were installed along the routes.

These elements were accurately manufactured in a factory environment and then transported to site where they were installed by the main contractor, Jodan Construction, and, in so doing, saving significant time in steel fixing and shuttering works associated with cast-in-place construction methods.

To further accelerate the works programme, the contractor sourced quality crushed aggregate and rock-fill directly from Thaba Chueu mine in an approach that saved significant time in locating suitable material and the need to open borrow pits.

These quantities demonstrate the sheer extent of the construction works that were completed in such a short period of time, and Visagie says that Jodan Construction’s strong team on site also played a very large part in helping the professional team meet this onerous deadline by maintaining the required consistently high quality levels.

This is in addition to the significant resources the contractor deployed to the project to keep works progressing according to schedule.

For example, more than 60 tipper trucks were on site to transport construction material to the various work faces – an extensive logistical undertaking that required close and careful coordination.

Meetings were held almost daily between representatives of the contracting and engineering teams to regularly assess progress made and to anticipate and quickly solve challenges as and when they arose.

Certainly, the hands-on approach adopted by the client and its willingness to assist in solving complications and excellent team dynamics between all representatives of the professional team also played a large part in the successful outcome.

As resident engineer, one of Visagie’s critical functions on site was to provide technical advice to the professional team, and he is very proud of the extent of innovation that was deployed on this project to solve many challenges.

This includes working in a wetland through which the new provincial and district roads traversed.

A novel solution was devised to stabilise the bases for the 14 large 2.4 m x 3 m structures that were installed in this marshy terrain.

Another example of innovative thinking was the use of impact compaction rollers on as much as 80% of the road distances to accelerate the treatment of large areas located in commercial maize farmlands.

“It has been used extensively in the country on public-sector road construction projects such as those by the City of Tshwane Roads and Stormwater Department.

This was the ideal opportunity to introduce Thaba Chueu Mine to an affordable and long-lasting surfacing product, the performance of which will be monitored as part of a trial period,” Visagie says.

One of the challenges on this component of the project was co-ordinating construction activities with the extensive haulage operations of Thaba Chueu mine.

The road serves many large rigid dump trucks, and the mine is still to determine whether it will upgrade from the existing semi-automated traffic and access control system to the proposed fully-automated technology that uses sensors to determine the proximity of oncoming traffic.

The road comprises a 150 mm thick base course, 200 mm sub-base layer and two selected layers, and the contractor deployed a state-of-the-art road recycler for stabilisation to provide a consistently homogenous mix with cement pockets unpacked by hand to ensure accuracy.

Meanwhile, the provincial corridor caters to high traffic volumes and this includes the many heavy commercial vehicles that use the road and abnormal loads that are transported to and from mines and other industries in the area.

To maintain high road safety levels, the bypasses along this route were built to pavement standards and illuminated with solar lighting, while extensive signage was installed on both sides of the road to alert traffic.

“We also had an extremely competent Exxaro Resources safety officer on site. He went to the extra effort of alerting all couriers working in-and-around the area of the bypasses.

The mine also installed an imitation of the speed cameras typically deployed by the traffic authorities. They flashed at speeding vehicles to slow them down and this proved to be very effective means of encouraging safer driving behaviour,” Visagie says.

Importantly, this project provided ample employment, as well as skills development and training opportunities for members of surrounding communities – in line with Exxaro Resources’ empowerment policies on all of its capital projects.

Meanwhile, a local emerging contractor was appointed to construct a 1 km section of the district road, gaining valuable experience while working alongside an established principal contractor.

Visagie concludes that he is proud to have had the opportunity to work on yet another road project for Exxaro Resources that has provided Leeuwpan mine, an employer of about 600 people, with an addition 10-year lease on life.