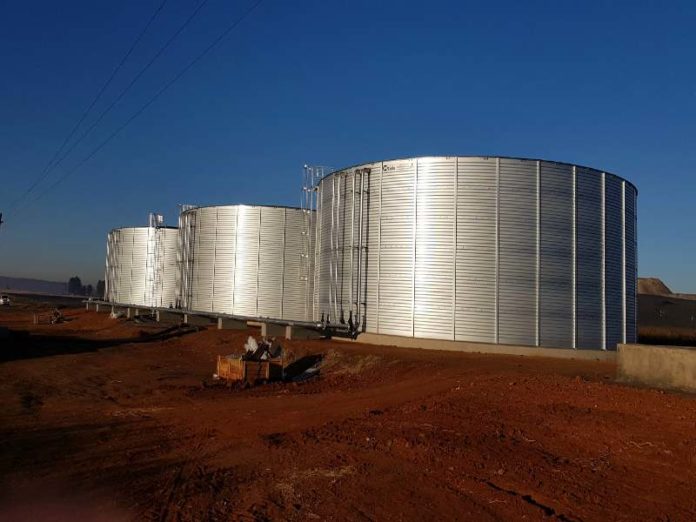 The incorporation of a new water solution at Universal Coal’s Kangala colliery has over the last year proven to be a massive success.

Having unconventionally eliminated the primary purpose of its pollution control dam (PCD), the ASX-listed coal miner is achieving massive savings on its water consumption.

It is further benefiting from guaranteed water supply which has ensured no process plant interruptions, collectively improving the financial performance of the mine as well. LAURA CORNISH visited the site to learn more.

Kangala colliery represents the start of coal production for Universal Coal which it started at the beginning of 2014. The majority of its 2.4 Mtpa saleable coal production is supplied to power utility Eskom.

Having quickly expanded its production in its early years on the back of Eskom’s requirements, the original Kangala pit is approaching the end of its lifespan and is due to be depleted in July 2020.

This however does not mark the end of the mine’s lifespan. Having acquired the adjacent, coal resource-contiguous Eloff property, Kangala is ensured another + 10-years of lifespan, Universal Coal development engineer Kevin Donaldson highlights.

With a long and prosperous future ahead of it, the company took the decision in 2017 to address one of its more pressing issues on site – water consumption.

On the back of high volume water requirements necessary to operate its process plant, Kangala’s original footprint was designed to incorporate a large PCD.

“Unfortunately, with time the mine started realising significant water losses from our PCD as a result of evaporation, made easier by the size of the dam.

“While Rand Water was able to supply our needs as an alternative, it was a costly exercise and one that needed an alternative solution,” explains Abrie Van der Merwe, plant manager at Kangala (The mine sources its water from permitted boreholes in the area).

Having executed a number of studies into various solution options, including reducing the size of the PCD, Universal Coal CEO Tony Weber opted for water storage after coming across water storage specialist SBS Tanks through a mining publication he was reading on a plane.

A quick evaluation and pricing assessment of the product revealed the solution Kangala so greatly needed – it was cost effective, quick to fabricate and install a water storage system which would resolve its PCD evaporation challenges while ensuring it would maintain an environmentally friendly footprint thanks to its ability to maintain the mine’s closed water circuit.

On the back of its requirements for 6 Mℓ of water storage capacity, the Kangala and SBS teams jointly agreed that three 2 Mℓ tanks on site would deliver the best results, as opposed to fewer tanks with larger water-holding capacity, SBS’s mining head Andre Lotriet points out.

“With a shallow height of just 6.28 m and a larger footprint (3 x 21 m diameter tanks), this water solution offers minimal risk, a consideration influenced by regular blasting on site. And because the tanks are enclosed, evaporation has been eliminated entirely.”

“Using roughly 2.6 Mℓ on a full production day, we now not only have sufficient water to operate our mine, but since the tank’s commissioning we have not stood still a single day or lost any production time because of water shortages.

“The tanks have also completely eliminated the need to use Rand Water which is delivering significant financial savings to our bottom line,” Van der Merwe continues.

Fortunately, the PCD still plays an important role in the water circuit as penstock underground drains feed water into the structure from the slimes dam.

“We required only minimal supporting infrastructure to feed the tanks from the PCD which entails two submersible pumps pumping water into the adjacent three tanks which feeds water directly into the plant.”

To realise maximum benefits from the new system, Van der Merwe has incorporated a filtration circuit onto the plant which generates water for the mine’s dust suppression requirements.

In addition to the technical capabilities of the SBS tank structures, both Donaldson and Van der Merwe agree that SBS Tanks offers additional benefits that contributed to the overall success of the project.

“This ranges from the speed at which the entire project was completed to the service delivery offered throughout the duration of the project and thereafter as well,” Donaldson highlights.

A closer look at the SBS tank

Having identified the need to have its water system operational by the winter of 2018, only three months after the order was finalised, SBS Tanks needed to move quickly.

Fabrication commenced on 14 March 2018 followed by installation on 2 May. The tanks were fully commissioned by 11 June, which took only 11 days.

“While we always boast the speed at which we can deliver our tanks, we are particularly proud of the timeframe in which we completed this order, which is impressive considering our 2 Mℓ tanks are among the largest sizes we build,” Lotriet notes.

“In addition to working 24-hour shifts to manufacture and fabricate the steel for the tanks in less than six weeks, the company deployed an additional team on site during installation which enabled us to erect all three tanks simultaneously.”

SBS Tanks’ erection process is also smart – as opposed to using the conventional process of building the tanks upwards from the ground using cranes, these tanks are built entirely on the ground.

Comprising pre-fabricated rings, each ring is positioned in place (the first being the top with a closed lid), winches are used to jack the rings up as new rings are placed below them. This process is quick, effective and safe.

It is applied in a continuous hot dipped process, rendering the steel highly resistant to corrosion.

“This guarantees a healthy +60-year lifespan for our tanks if they are well looked after.”.

Although the Kangala water is not corrosive, SBS still built a PV liner on the inside tanks to prevent internal corrosion. “The water never comes into contact with the outer structure of the tank.”

To enhance the benefits realised from its one-year old water system, Universal Coal invested additional capital into automating the entire system which enables the team to monitor the system at any given time from any internet-connected device.

And so successful has the SBS tanks proven for Kangala, that Universal Coal is considering using them at some of its other projects Donaldson concludes.

The company also operates the NCC mine in eMalahleni, North Block Complex in Belfast and will soon bring on stream its fourth project – Ubuntu colliery (formerly Brakfontein colliery) about 20 km from Kangala in the near future.