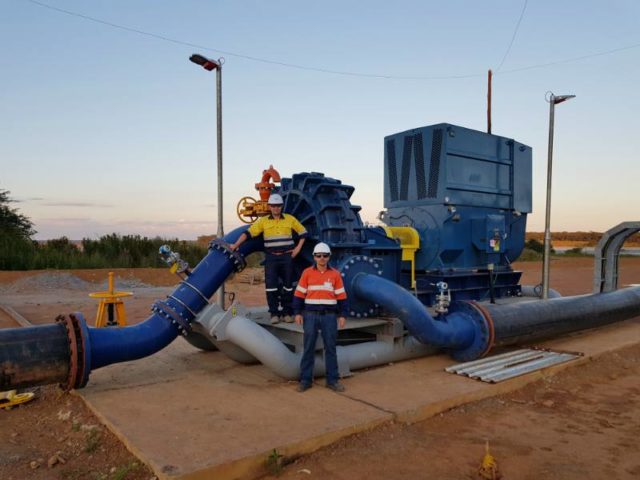 To ensure the continued sustainability of its operation, a large-scale copper mine in Central Africa required an innovative and cost-effective solution to extend the lifespan of its tailings storage facility.

Thanks to the expertise and out-of-the-box approach delivered by slurry pipeline specialist Paterson & Cooke and electrical infrastructure expert Zest WEG Group, the result has delivered on every front, writes LAURA CORNISH.

The result of many years of depositing tailings material from the operation’s process plant to its valley impoundment tailings storage facility (TSF) has seen the south side of the facility approach the end of its lifespan.

Having worked with the mine for several years, Paterson & Cooke senior engineer Bruno Salvoldi explains that these valley impoundments are always carefully positioned taking the area and more specifically the local topography into account, as well as the location of the process plant.

“The plant was built on the south side in close proximity to the TSF, with the understanding that with time the need would arise for the mine to continue pumping tailings to the far north side of the facility.”

“This is an extremely large site and the requirement to transfer and pump material to the furthest reaches of the facility without being able to take the most direct route over the dam itself required a unique approach, one also driven by the need to be as cost effective as possible,” Salvoldi continues.

A novel solution that fits the brief

Taking into consideration the geometry of the site that moulds to the valley, combined with rough terrain that requires constant maintenance and the subsequent inability to build a new pipeline within a pipe corridor, the solution followed a less obvious approach.

After traversing the causeways, the material is pumped via HDPE pipelines to new pumping stations to deposit material on the allocated area,” Salvoldi outlines.

They are designed to pump material up to 7 km away using low pressure HDPE piping rated at 1 250 kPa. Unconventionally, a 12-pole motor was selected to enable the elimination of a gearbox in the field, allowing the pump to be directly driven and reduce maintenance costs.

Paterson & Cooke, and electrical sub-consultants Bührmann Consulting Engineers, worked closely with the owner’s team and were responsible for the design and implementation of the pump stations, and also provided QA/QC, construction supervision and commissioning assistance of the entire project.

Construction for Phase 1 started in mid-2017 and was commissioned early in 2018, with Phase 2 being commissioned in early 2019. “The entire system has been operating successfully ever since and is acknowledged by the client as a success,” Salvoldi highlights.

As the far side of the TSF quickly fills, again molding to the shape of the terrain, the mine is already considering expanding its pump/causeway solution which will entail the addition of three new causeways – again to keep the pipeline distances as short as possible – along with a two similar pump stations.

Based on the estimated timelines in which the facility will fill, Salvoldi says the new infrastructure needs to be in place and operational by 2021 after which the mine can continue to deposit its tailings comfortably for the duration of its current lifespan.

The driving force (literally) behind the delivery of the project is Zest WEG Group and its sister companies Shaw Controls and WEG Transformers Africa.

Having considered various options to power the project, Zest WEG Group was determined as offering the most practical power delivery mechanisms that fitted with the project’s requirements and also didn’t add extensively to the overall cost of the project.

Having opted for Zest WEG Group’s WEG MVW01 medium voltage (MV) variable speed drive (VSD) and WEG MGF560 12-polemotor combination for the 1 000 kW booster pump system, it made sense to execute the electrical requirements for the project through a single solution provider Salvoldi notes – and so the company was brought in to deliver this entire project scope.

“There are a number of benefits incorporated into the electrical system we built and installed,” Willemse continues.

Structurally, using pipe skids means the entire system can be easily moved if necessary, an important factor considering it is situated within the larger tailings area.

Skid mounting systems also means the infrastructure they support can be largely commissioned off-site which translates to a shortened commissioning time on site.

Willemse further explains that the decision to use a WEG outdoor VSD oil type transformer as opposed to a dry type indoor VSD transformer housed in the substation, meant the HVAC requirements in the substation were significantly reduced,  further increasing efficiency of the system..

“Because we fulfilled a project management role throughout the duration of our project, it showcases our ability to deliver full electrical solutions well beyond the supply of the various electrical components used on the project,” Willemse concludes.