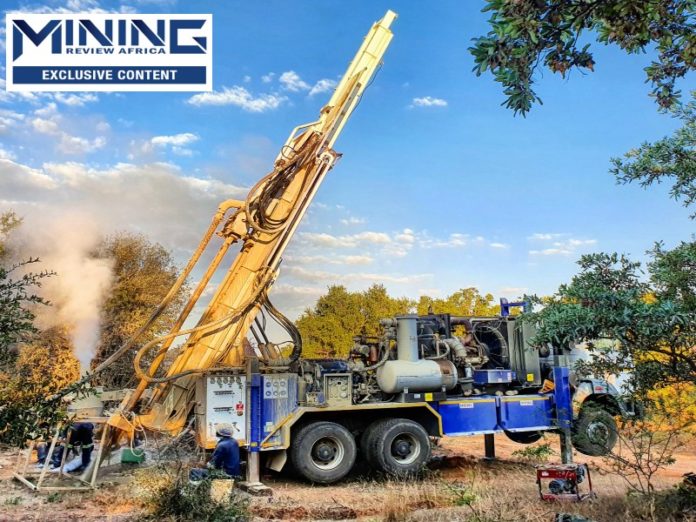 Having diligently undertaken exploration on Thorny River over the past four years, Botswana Diamonds has managed to narrow down its exploration focus from an area spanning about 10 km of kimberlite dyke strike on portions of the Frischgewaagt, Hartbeesfontein and Doornrivier properties, to two target areas of no more than 200 m of strike each on the Frischgewaagt property.

It is on these two target areas at Thorny River where the company has been pleasantly rewarded with the discovery of two small kimberlite pipes, known as kimberlite blows, on which detailed ground geophysics and drilling has subsequently taken place.

The first blow – River Blow – was discovered in November 2020, while the second blow –  River Extension Blow – was discovered in May 2021. Both blows are similar in size at between 10 and 20 m wide and lie contiguous to one another, says Campbell, noting that independent specialists have modelled the two blows as containing between 300 000 to 600 000 t of kimberlite.

Drill samples from the recently discovered River Extension Blow, which were sent to an independent processing facility for assessment earlier this year, were found to contain four diamonds of good colour, clarity and of commercial quality along with extensive diamond indicator minerals including G10 and G9 pyrope garnets (which are common in diamond-bearing kimberlite pipes), eclogitic garnets, chromites, ilmenites and chromium diopsides which are common in diamond-bearing kimberlite pipes, Campbell notes.

“The encouraging diamond indicators from our drill results and drill samples now points towards Thorny River being a high quality prospect,” says Campbell.

The company will now begin the crucial next step in its exploration work at Thorny River, expected to take place towards the end of August or early September. This entails a percussion drilling programme to assess the mineralisation between the two adjacent blows, which are located less than 100 m apart from one another.

“This is expected to test the company’s belief that the two blows potentially join to form one continuous ore body,” says Campbell, noting that this would be a significant step towards defining a commercial diamond ore body at Thorny River.

The company is currently undertaking further resource definition work by refining its estimate of the geological continuity, grade continuity and volume at Thorny River, which could culminate in the releases of a maiden diamond resource assessment for the project, which Campbell estimates to take place in the not too distant future.

He explains that that the next step to be embarked on by the company would be to undertake a detailed core drilling programme, currently planned for the 2022 dry season, to further define the geological model at Thorny River, which may comprise a larger economic kimberlite zone than previously thought to exist.

The company also plans to undertake a bulk sampling programme at the project (for which it has Section 20 authorisation to do so) to better understand the diamond value of the Thorny River ore body. By selling the diamonds that it recovers from the bulk sample, the company will be able to arrive at a definitive Dollar-per-carat diamond price, giving it a better idea of how best to commercialise the asset, says Campbell.

Could history repeat itself in delivering another diamond mine?

According to Campbell, all signs currently point to the fact that history may repeat itself within theZebediela kimberlite field in Limpopo, which hosts the Thorny River project.

The kimberlite field consists of a series of consistent diamondiferous kimberlite dykes along a 20 km strike length, with several blows discovered along the east to west trending kimberlite dyke system to date.

Besides the recently discovered blows at Thorny River, Campbell says there have been several historic blows discovered within the kimberlite dykes, namely Kudu, Sugarbird, Sugarbird Pass (which together formed the Klipspringer mine) and the Marsfontein blow, all of which have since been mined out.

The relatively small 0.4 ha Marsfontein blow was developed into the extremely profitable Marsfontein diamond mine by its then shareholders De Beers and SouthernEra Diamonds, which was etched into history as the mine with the fastest payback period at just three-and-a-half days.

Campbell believes finding another ‘Marsfontein’ is likely at Thorny River, as the historic Marsfontein mine is a mere 3.5 km west and on strike from the company’s discoveries.

The kimberlite at Thorny River has also been found to be consistent in terms of geology, grade and diamond value, with that found at the Klipspringer mine in the west and the Frischgewaagt property to the east. Botswana Diamonds therefore expects the Thorny River kimberlite to contain an average in situ grade of 60 cpht, based on the historical data from the surrounding areas and assets, which is high grade for a kimberlite, according to Campbell.

Across the border in Botswana, the world’s largest diamond producer by value and the second largest by volume, Botswana Diamonds has grown its asset base even further.

Having undertaken exploration in the Kalahari region of Botswana, both under its own wholly-owned subsidiary Sunland Minerals and in joint venture with BCL in Maibwe Diamonds, the company acquired the full interest in Sekaka Diamonds, Petra Diamonds’ exploration vehicle in Botswana in 2020.

The deal saw Botswana Diamonds acquire three prospecting licenses which includes the high grade KX36 kimberlite pipe; a recently constructed, fit-for-purpose bulk sampling plant; and an extensive database built up over 15 years of exploration – all of which is also located in the country’s Kalahari region.

Later that year, in November, Botswana Diamonds also entered into an earn-in agreement to fund exploration of its prospecting licence assets in Botswana with private Botswana company Diamexstrat, which in turn has an alliance agreement with ASX-listed Burgundy Diamond Mines.

Under the agreement, the parties have also agreed to use Botswana Diamonds’ extensive diamond exploration database (acquired as part of the Sekaka transaction), which contains the results of work undertaken in country since 2005, and could provide all parties with substantial support to all future kimberlite exploration activities in Botswana.

According to Campbell, through its partnerships, Botswana Diamonds is now one of the most active explorers in Botswana. On the back of a recovering diamond market which was impacted by the COVID-19 pandemic, Botswana Diamonds is evaluating the potential of its exploration current exploration assets and continues to remain on the lookout for new opportunities, Campbell concludes.

Facebook
Twitter
Linkedin
Previous articleICMM makes landmark climate commitment to net zero by 2050 or sooner
Next articleNatural vs. lab-grown diamonds – Where does the true value lie?