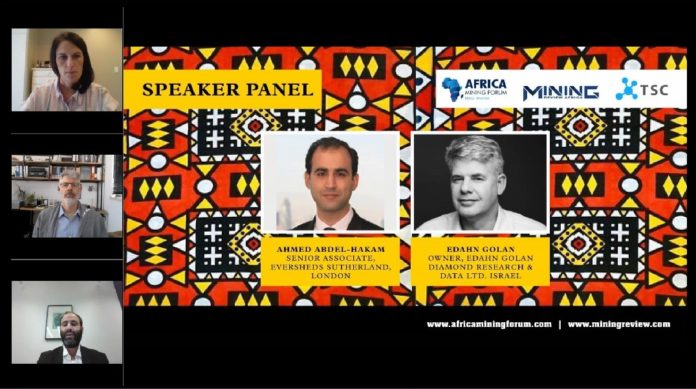 Experts discussing the future of Angola’s already promising diamond sector, agreed that a transparent and credible dispute resolution mechanism along with associated industry legislation and institutions will improve the country’s attractiveness for foreign investors.

The country is currently the world’s fifth largest producer of diamonds. In spite of this, only 40% of the country’s known diamond resources are being mined and recovered – largely the result of weak investor confidence in the country’s legislation and policy.

A live webinar by Mining Review Africa and Africa Mining Forum, unpacked the potential and challenges of Angola as an investment destination.

Ahmed Abdel-Hakam, senior associate at the international arbitration group Eversheds Sutherland in London, stated that the Angolan mining sector was going through substantial reforms currently, aimed at enhancing the sector’s performance, transparency and potential for growth.

“So I think that this reform is key to compensate for the sharp decline in public revenues because of the low oil and gas prices and the decrease in the global demand for these commodities.”

The fact that Angola is modernising its approach is key if it wants to be a player in this field, said fellow panelist Edahn Golan, who is a diamond industry analyst and researcher and founder of the Edahn Golan Diamond Research & Data in Israel.

“It is essential for a government to be actively involved in promoting its diamond industry,” he added.

“This is true for producing countries as well as for trading countries such as India and Belgium. What we should remember in this context is that when we talk being involved, we are talking about support, the kind of support that generates a lot of problem solving, allowing commerce to work freely.

“Diamonds are an unusual commodity,” Golan explained, “it’s small, high value, difficult to price and we find that many traders are very price sensitive, so the way taxation is treated and all of those elements are very important when a government is evaluating what kind of policies it needs to implement when approaching its diamond sector.”

According to Abdel-Hakam, Angola is on the right track to creating a supportive environment.

“A few years ago,” he pointed out, “Angola may have suffered from a negative perspective by foreign investors. However, I should really point out that there has been a substantial shift in policy with the new leadership and the package of regulations adopted during the last few years has significantly improved the country’s attractiveness in the mining sector in general, and in precious metals mining in particular.”

“Basically adopting a battery of presidential decrees issued since 2017 in relation to the creation of the National Resources Agency, putting in place a comprehensive foreign exchange regime for the diamond sector, and technical regulations for the marketing of rough diamonds and dealing with customs as well.”

Abdel-Hakam said in combination, these legislative changes contribute to increase sector efficiencies by reducing the state’s direct participation and they aim to promote transparency in the industry. “I really think we are heading in the right direction.”

The panel also discussed how the COVID pandemic affected the Angolan diamond market.

According to Golan, diamond prices globally went down between 9% and 15% and that the retail market in particular suffered heavily under COVID, as the diamond industry is almost completely dependent on the jewellery retail sector and many stores were closed.

“Consumers don’t buy a lot of diamonds online, it’s not growing at the same rate as other products. Even cars are bought online more frequently than high priced diamond jewellery.”

“Since then the polished diamond sector has rebounded. The demand for jewellery in 2020 in the USA outpaced 2019.”

Golan noted that during the pandemic, mining companies adopted two different approaches. They either closed or stayed open. As the industry is cash intensive, small companies find it very difficult to survive during such a period. However, the mines that continued to operate, built up a big inventory during those months and continued to provide jobs and economic activity.

The results of the live audience opinion poll during the webinar were as follows:

According to Abdel-Hakam, legal stability is paramount for investors to ensure they receive a return on their investment and to be able to export their profits. “From a disputes lawyer perspective, this can have an impact on investor attractiveness, but can also trigger a barrage of claims.”

“I think the biggest challenge is that Angola should continue its ambitious reform plan that is underway, mainly the privatisation plans. The planned IPO of a portion of Endiama shares is definitely going to inject some fresh blood into the company and affect the diamond sector.”

He cited as the three main sources of risk that cause disputes in the mining industry: discriminatory legislative changes, joint venture agreements and environmental issues.

Both panellists agreed that despite the challenges discussed, Angola has a lot of potential to become an important diamond producer.

According to Abdel-Hakam, Angola has about 14 active diamond mines currently and the fact that many major players from Australia, China and Europe are present shows that it is an attractive place to invest money. “There is heavy investment going on in Angola’s diamond industry, including polishing centres.”

Click here to watch the full webinar on demand