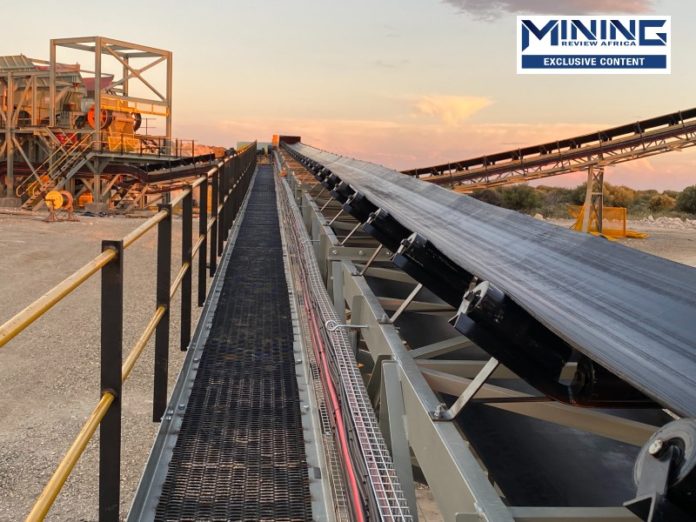 AIM-listed diamond producer BlueRock Diamonds, which owns and operates the Kareevlei diamond mine in the Kimberley region of South Africa, is on the cusp of completing a major expansion.

At the heart of the expansion is commissioning a new and improved processing plant, writes CHANTELLE KOTZE.

The expansion strategy at Kareevlei is aimed at increasing annual throughput to 1 Mt and extending the life of the mine to a minimum of 10 years, says BlueRock Diamonds COO Gus Simbanegavi, who is also the CEO of the local operating subsidiary Kareevlei Mining. Simbanegavi, who took on the role in mid-2019, with an initial focus on increasing production levels at the mine, is spearheading the execution of the expansion plan.

The company first undertook a plant configuration review in 2015, due to ongoing operational challenges, which found that a plant reconfiguration and upgrade was needed – firstly, to reduce variable costs and secondly, to provide a more consistent product to the plant to enhance processing efficiency and improve grade.

This entailed the repositioning of the pans and scrubber as well as the construction of new primary crushing and pre-screening circuits, allowing the materials handling facility to feed into the plant at a higher rate.

Next, the company began to tackle the bottlenecks at the plant. The secondary crushing circuit was not operating optimally and necessitated an upgrade to the circuit with the installation of additional cone crusher to operate alongside the existing cone crusher.

The second cone crusher, which began operating in August 2019, enabled the company to maintain production volumes and to build stockpiles of crushed ore in line with the company’s production target of 40 000 tpm, which it achieved ahead of schedule in September 2019.

With the dry end of the processing plant performing as expected, the wet end of the plant was struggling to keep up with the increased crushing levels. This necessitated the installation of a third 16 ft diamond pan, which was commissioned in December 2019, and helped improve diamond recovery and increase production.

Moreover, to enable the mine to produce on a continuous basis as opposed to a seasonal basis due to the rainy season, part of the work included relooking the working cycles to allow the mine to be operated all year round – 24/7, 365 days a year, says Simbanegavi.

With his sights sets firmly on increasing production at Kareevlei even further, Simbanegavi was given the green-light by the board to commission a new 1 Mtpa plant on site as part of the expansion strategy. The key drivers being the optimisation of the resource and to drive down costs due to the economy scale impact.

Despite this tumultuous past, marred by ongoing operational challenges and the lockdown restrictions resulting from the COVID-19 pandemic in 2020 in which the mine was closed a period of 50 days between March and May (putting both its production and expansion plans on hold), BlueRock Diamonds is finally on the road to improved diamond processing capacity, thanks to ongoing work on the existing processing plant and the new processing plant, currently under construction.

According to Simbanegavi, the rationale behind the new plant was for it to be significantly more reliable than the old plant, even during the rainy season, by minimising downtime due to a number of  plant design improvements which will ensure a more stable operation.

The dry end of the new plant features a 160 to 180 tpa primary crushing circuit where a jaw crusher crushes the material from -500 mm in size down to -75 in size. This material feeds into a primary screen which removes the -18 mm material, sending it straight to a stockpile tunnel for further handling.

Meanwhile, the +18 mm -75 mm material is then diverted to a secondary crushing circuit comprising two cone crushers, which crushes the material down to -18 mm. This feeds back via a closed circuit to the primary screen to be screened, where it joins the -18 mm material stockpile tunnel.

Simbanegavi explains that the aim of the stockpile tunnel is to limit rehandling of the crushed material, as the -18 mm stockpiled material is fed directly via a feeder belt in the steel tunnel into the wet end of the circuit for further processing. The -18 mm material is then diverted into two respective lines, each line comprising a scrubber, screen and two pans. The material is first fed into a scrubber and discharged onto a screen which removes the 1 mm fines.

The +1 mm – 18 mm material is then sent to a pan feed bin where it is fed on a continuous rate onto two 16 ft diamond pans at 80 tpa. Once separated on the pan, the coarse material reports to a course tailings dump while the concentrate (which compromises 1% of the original kimberlite material by mass) reports to a dense media separator which concentrates the material even further. The final concentrator passes through an X-Ray sorter at which point the diamonds are recovered.

The rationale for having two lines within the wet end allows for greater flexibility during plant maintenance. Simbanegavi highlighted that the both plants will be run simultaneously during Q2, to minimise the disruption to production during the plant transition.

Simbanegavi says that the new plant is expected to be fully operational by the end of July, a month later than previously anticipated. The critical dry end of the plant was completed and commissioned in February, while the wet end of the plant is still under construction, but nearing completion.

The aim is to have the first line in the wet end commissioned by July, at which point the old plant will be decommissioned and two of the diamond pans from the old plant relocated and installed at the new plant, followed by the commissioning of line two, soon thereafter.

“Notably, once the new plant is fully commissioned, the company’s production profile is expected to be significantly less impacted by the rainy season and yearly throughput will be 1 Mtpa as envisioned from 2022 onward,” Simbanegavi says.

Once commissioned, the company will undertake continual optimisation work which provide leeway to slightly increase throughput if needed.