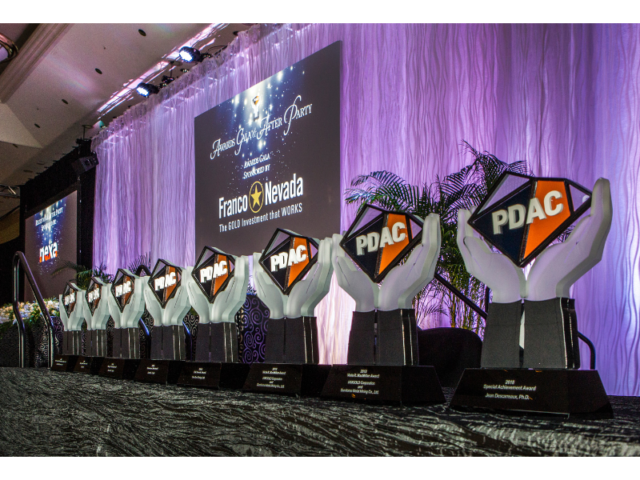 The Prospectors & Developers Association of Canada (PDAC) is excited to announce that six top international and domestic performers have been selected in recognition of their excellence.

Now in its 41st year, the annual PDAC awards showcase exceptional leaders in the mineral exploration and mining community. Recipients will be celebrated at an Awards Gala & After Party at the Fairmont Royal York Hotel in Toronto on Tuesday, March 5 during the PDAC 2019 Convention.

Congratulations to the award recipients for their outstanding accomplishments.

In 2008, the Peregrine Diamonds exploration team made the grassroots discovery of the Chidliak Diamond District, near Iqaluit on Baffin Island, Nunavut–Canada’s second largest kimberlite district. Exploration programs and engineering studies completed between 2008 and 2018 led to the discovery of 74 kimberlites, one of which has a 17.96 million carat inferred mineral resource with an average grade of 2.41 carats per tonne and average diamond value of US$151 per carat, with six other kimberlites having economic potential. A 2018 Preliminary Economic Assessment outlined an open pit mine with a 13-year mine life and post-tax NPV of CAD$668.7 million and IRR of 31.2%. Peregrine was acquired by De Beers Canada in 2018, and anticipation is that Chidliak will become Canada’s next diamond mine.

The inaugural Chair of the PDAC Aboriginal Affairs Committee that was formed in 2004, Don is credited with raising awareness about the importance of engagement between companies and Indigenous communities, and encouraging participation by Indigenous peoples in the mineral industry. During Don’s tenure, PDAC saw tremendous growth in participation by self-identified Indigenous people at the annual PDAC Convention. Don was instrumental in developing a relationship with the Assembly of First Nations (AFN, which ultimately led to the Memorandum of Understanding between PDAC and AFN, signed March 4, 2008.

A uranium exploration and development company with a portfolio of projects in Saskatchewan’s Athabasca Uranium Basin, NexGen is giving back to the province by investing in community initiatives focused on education, health and economic development. NexGen’s programs empower Saskatchewan’s youth through hands-on work experience, providing access to education, sport and employment opportunities. From an environmental standpoint, NexGen is an early adopter of centrifuge units and introduced the use of TECH Directional drilling methods as a way of reducing the surface footprint from exploration drilling.

A well-known and respected geologist who is a member of Sachigo Lake First Nation in northwestern Ontario. Gord’s 35+ year career has taken him around the world evaluating projects and potential acquisitions. He is a long-time workplace health and safety advocate, and has spent many years championing the Canadian Diamond Drilling Association’s Drilling Excellence Certification Program to establish a new, higher standard of quality in the diamond drilling industry. He is well-known and respected in the Canadian minerals industry and is an exceptional role model to all youth, particularly young Indigenous people.

The Namdini Project is a rapidly evolving discovery. An atypical Birimian gold deposit in the northeast corner of Ghana that comprises an initial Minable Reserve of 129.6 million tonnes at an average grade of 1.14 grams per tonne of gold, for an impressive 4.76 million ounces of gold that can be extracted from a single open pit. In addition, there are nearly 63 million indicated and inferred tonnes at 1.2 grams per tonne of gold for 2.11 million ounces gold. Based on the October, 2018 pre-feasibility study, and using US$1,250 as a gold price, Namdini has a post-tax NPV(8) = US$588 million, with a IRR of 38%.

Nemaska’s Whabouchi project is located in the Eeyou Istchee James Bay region in Québec, and is one of North America’s largest spodumene deposits. The company successfully completed a CAD$1 billion financing package in May 2018, to build a unique lithium hydroxide and carbonate production facility, in tandem with a spodumene mine. The Whabouchi Mine and concentrator are expected to start production with sales of spodumene concentrate in the third quarter of 2019. It has an initial 33-year mine life and is expected to produce 213,000 tonnes per year of 6.25% (Li2O) spodumene concentrate.

PDAC’s Board of Directors select recipients based on the recommendations of the association’s Awards Committee. More information about the 2019 award recipients will soon be available at www.pdac.ca.

PDAC is the leading voice of the mineral exploration and development community. With over 8,000 members around the world in all sectors of the mining industry, PDAC’s mission is to promote a globally-responsible, vibrant and sustainable minerals industry. As the trusted representative of the sector, PDAC encourages best practices in technical, operational, environmental, safety and social performance. PDAC is known worldwide for its annual PDAC Convention, regarded as the premier international event for the mineral industry. The PDAC Convention has attracted more than 25,000 people in recent years and will next be held March 3-6, 2019 in Toronto. Please visit www.pdac.ca.