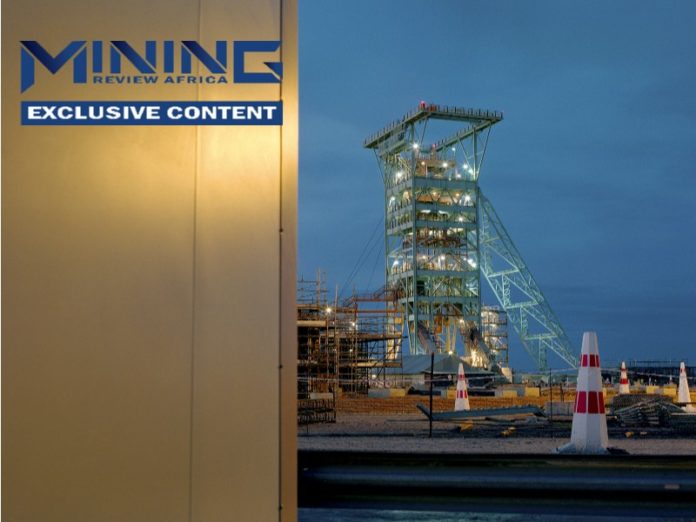 De Beers Group’s US$2 billion Venetia Underground Project (VUP): It has been a long time coming but the end of execution is in sight and production start-up fast approaching.

In essence, the VUP is a 10-year project designed to transition the mine from open pit to underground and in so doing extending its lifespan by an incredible 23 years – a noteworthy investment designed to ensure Venetia remains one of the company’s top performing diamond mines across the globe, VUP project director ALLAN RODEL tells LAURA CORNISH.

Situated in Limpopo, Venetia has been producing diamonds since Harry Oppenheimer officially declared the mine operational in 1992. Today it produces roughly 4 – 5 million carats from a ROM production of 5.5 Mtpa.

“Thanks to the VUP, we will maintain this production until 2045. And while this is a significant life extension project already, we believe there is potential to stretch this even further by gaining access below the planned mine levels of one of the two kimberlite pipes.

“Evaluation work to date indicates the possibility to add another five years to Venetia’s lifespan should this be determined viable,” says Rodel.

In essence, the VUP entails the design, procurement, fabrication, construction, logistics, etc. of an entirely new mining complex that includes an underground mine and all associated shaft and surface infrastructure.

Once in operation, Venetia’s two kimberlites (K01 and K02) will have fully transitioned from open pits to underground operations. The K02 pit’s resource is already depleted and the K01 pit should conclude surface mining in late 2021/early 2022 – accommodating a smooth changeover to the underground mine.

For now, both pipes will be mined using a sub-level cave method although Rodel mentions that optimisation work is currently underway to consider the benefits of using the block cave mining method for K02.

Both ore bodies will be accessed through two vertical shafts, blind sunk to a depth of 1 065 m.

Both the service and production shafts will serve as downcast air intakes to the underground workings.

A decline and pit ramp will assist with early underground access for the construction of the K01 and K02 production infrastructure, concurrent to the vertical shafts.

They will also serve as an additional air intake and logistics management facility, mitigating the immediate requirement of the loading stations on the service shaft to achieve the production ramp up.

Tracking the project to date

As could be expected, COVID-19 and lockdown measures brought some challenges to the project’s overall timelines and start-up. “The overall project is largely on track when compared to the 2020 plan with overall progress at 40% against a plan of 41%.

The current variance of 1% is primarily at the bottom of mine development, where resourcing challenges were experienced with the post-COVID-19 ramp up schedule.

The issues causing progress delays have been addressed and productivity is showing improvement. First production is on track for Q3, 2022,” Rodel states.

The company is proud of the work it has achieved in light of the COVID-19 constraints.

“We are on track according to our adjusted timeframes and the work that the mine has spearheaded within our host communities to best protect their health and wellness has been significant achievements in their own right,” Rodel continues.

To date both shafts, being sunk and equipped by Murray & Roberts Cementation, have been completed, alongside +16.5 km worth of excavations.

A lot of focus was spent on determining how best to start extracting ore from the underground mine and this led to the De Beers Group introducing a revised ground handling system in place of the temporary rock hoisting system.

“The updated ground handling system relies on a trucking fleet to haul production tonnes during start-up. The haul trucks will initially tram to surface via the pit ramp and later to the Top of Mine crusher that will crush the ore for hoisting with the production shaft. After the commissioning of the bottom of mine crushers the ore will be loaded into ore passes and transferred to the crusher using automated trucks,” outlines Rodel.

This design has improved the project’s sequence and schedule, enabling better access and optimising the development sequence, meaning the onset of production from K01 could be brought forward.

“Our operational optimisation also includes the introduction of the integrated owners team which is supported by a Tier 1 mining and development contractor to help establish world class systems and processes for the stay-in-business (SIB) capital scope of works,” Rodel states.

There are three keys areas of focus for 2021, and these include development work to start production, the commencement of the SIB scope of works and the ongoing completion of surface infrastructure.

“Our K02 portal development will move forward in 2021 and we must start kimberlite development thereafter towards the end of 2021. The Top of Mine crusher must be completed and the establishment of an eastern decline from the portal to 54 level started,” Rodel says.

From an infrastructure viewpoint, Q1, 2021 is scheduled to see completion of the control room, the change house complex and the training centre, followed by completion of the production shaft winder and bulk air cooler in Q2, 2021.

“The SIB programme will see the start of ramp up in Q1, 2021 as the first pre-production primary fleet is commissioned. By year end we should be reaching steady state in terms of SIB development,” Rodel explains.

Beyond the next 12 months, the transition plan will take significant leaps in its journey to a world-class underground operation:

Approximately 150 open pit employees are being transitioned to underground. The process of transferring them starts with medical fitness screening and heat tolerance testing. The successful employees will be cognitively assessed, before being released to an underground training facility.

The tailored training programme enables them to meet minimum compliance obligations for working underground, in line with regulatory requirements.

They will be further trained to acquire provisional licences prior to proceeding to practical training on trackless mobile machines (TMM). Those at supervisory level will be trained in line with Mining Qualification Authority (MQA) for the relevant qualifications.

“We will be conducting stakeholder engagements with our communities and relevant authorities covering topics that will shape our transition journey. The underground project has added 2 000 job opportunities annually since inception, and this will ramp down during the next four to five years as construction is completed.

“We are making our communities aware that the project will come to an end, and we are engaging them on initiatives that will generate economic activities away from the mine.”

Other aspects of engagement include programmes to meet the housing needs of our employees and skills development, including new recruits from the labour sending communities.

To manage the change, De Beers Group has introduced programmes aimed at assisting employees to cope and adapt. This includes a specialised change management programme that will involves change resilience workshops for our employees.

Introducing a world-class mine within the industry requires the adoption and incorporation of the latest technology and De Beers Group has done just that.

“The VUP will have fully automated drilling, loading and hauling equipment – which we will introduce incrementally as the operation starts and ramps up.

“Our plan more specifically entails starting with the use of automated and autonomous equipment and thereafter introducing autonomous mining systems,” Rodel mentions.

“Not only will this deliver the best health and safety results for our workforce and also reduce the need for physically demanding jobs but at the same time increase the demand for higher technical skills.”

“This is a strong partnership with an experienced supplier in the field and this provides us with the comfort of knowing we will be able to target the highest possible productivity – the improvements of which can result in either higher output from the mine or producing the same output but with less equipment resulting in capital savings,” Rodel highlights.

The exposure to industrial information and telecommunication technologies, robotics and artificial intelligence, which is at the heart of automation, creates numerous employment opportunities of a technical nature i.e. automation brings about a shift from operational to technical skills and through this exposure, experience individuals are much better positioned for employment in a technology-driven economy (Industry 4.0).

The skills required to drive an automated mine however are substantially different to those required to manually operate any machinery, and more so, in an open pit environment.

“To remove this barrier, De Beers Group has embarked on a journey to prepare its workforce for the transition – this will include on-site and off-site transition training teams as well as a full change management process as mentioned.”