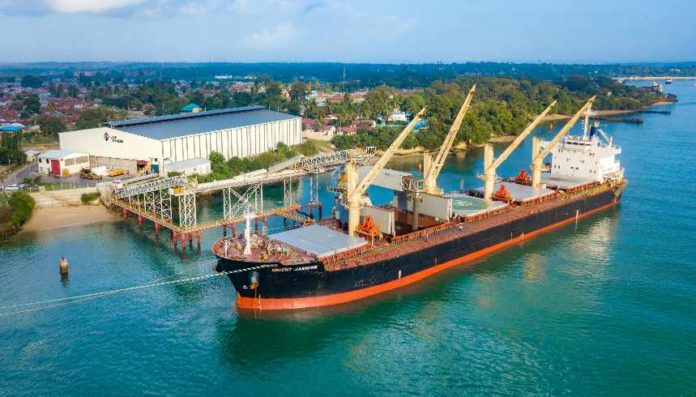 This entails the implementation of a US$32.6 million Phase 2 optimisation project designed to significantly improve the mineral sands mine’s financial returns over its remaining lifespan, Base Resources MD, Tim Carstens tells Laura Cornish.

The Kwale operation represents a significant upswing in Kenya’s mining industry since it started producing in 2014 – it is the country’s first large-scale mining project developed since about 1911 and represents about 60% of Kenya’s entire mining industry.

The project has been remarkably successful since first production, despite weak titanium, rutile and zircon prices – however – an increase in ilmenite prices over the last 12 months has enabled the company to significantly reduce its debt and in turn implement the optimisation project as well as pursue mine life extension potential.

Kwale comprise a large-scale mine (which is currently operating at a 10 Mtpa mining rate). The mine delivers material to a wet concentrator which delivers a heavy mineral concentrate into the mineral separation plant (MSP) which in turn produces the three separate products.

“The optimisation project is essentially focused on maintaining production outputs as the grade of the ore body declines over time and entails increasing the mining rate and concentrator throughput rate, seeking to ensure the MSP is operating at full capacity of around 90 tph,” Carstens explains.

He was speaking in an exclusive interview conducted at the recent Africa Down Under conference in Perth, Australia.

At a cost of $25 million during the 2018 financial year, mining rates will increase thanks to a changeover from dozer trap mining to hydraulic mining.

The concentrator capacity will increase following the addition of 600 spirals taking the total number of spirals in the plant from 1 200 to 1 800.

Procurement for the spirals is now underway with plans to shut down the plant in March 2018 for a month to tie the existing operation in with the expanded capacity.

“We have built an inventory of concentrate which we will process during the shutdown period to ensure the continuity of production.”

The first hydraulic unit’s capacity has now been increased from 400 tph to 800 tph, following which another two units will be brought on stream and brought up to capacity by 2019/2020 when Kwale transitions to the south dune.

“Because we will be blending feed from three mining areas as we phase out the dozer trap unit, the three 800 tph (each) hydraulic units will ensure better grade control and lower operating costs,” Carstens notes.

The overall increase in production rate will reduce Kwale’s lifespan, which is now due for completion at the end of 2022 – two years earlier than originally planned.

“This is however based only on our current reserves and we have exploration programmes currently underway and planned in pursuit of mine life extensions.”

Over the life of the mine, average production currently equates to:

Kwale currently employs just over 1 000 people, 63% of from Kwale county and 96% Kenyan citizens in total – this will remain unchanged following the optimisation project.

Base Resources is currently looking to extend the resource on the South dune and will imminently release the results of a drilling programme through an update to the South Dune resource.

The next phase of drilling will focus to the north east of the Central Dune where current mining operations are centred.

“Interestingly, this potential extension target area was initially identified almost by accident while drilling community boreholes in an area where we should not have found mineralisation, so it was totally unexpected.”

After conducting an aerial survey of a widespread region up to Mombasa, Base Resources has been able to identify interesting target areas, especially in the north east of the mining lease.

Carstens emphasises the positive experience his team have had working in Kenya and points out that Base Resources is committed to the country in the long-term and will look to exploit additional resources if viable.

The Kwale project is located in the southern corner of Kenya about 50 km from Mombasa, “on the right side of the Tanzanian border”. It is connected to the Kenya grid which is relatively stable with only occasional voltage interruptions.

The construction of the 8.5 million cubic litre Mukurumudzi Dam (built and funded by Base Resources) supplies water to the site.

There are water supply constraints for the optimisation project, which are largely the product of the daily extraction limits from the dam, imposed by licence conditions.

To overcome this constraint, the existing Gongoni bore field will be expanded and a further bore field constructed near the tailings storage facility (TSF), both of which are fully permitted.

The cost to develop the TSF bore field is included in the KP2 capital estimate. However, the decision to develop this infrastructure will be subject to further assessment following recently implemented water saving initiatives.

In late 2013, construction of a purpose built marine facility was completed at Likoni, south of Mombasa.

The fully Base Resources owned and operated port facility includes a storage shed capable of holding in excess of 90 000 t and a 1 000 tph ship loader.

The loading facility provides access to the existing shipping channel associated with the main Mombasa port, which is the primary terminal for East Africa.

Containerised rutile and zircon are exported through the main Mombasa container port.

Kenya geared for growth in support of mining sector

Kenya is sophisticated in terms of economic development and offers a high degree of collaboration on issues which need attention.

The implementation of an optimisation project at Kwale will elevate the financial rewards the mine will generate for the remainder of its lifespan.

“We have always enjoyed a strong working relationship with the government, which has only improved since the official establishment of a mining ministry in 2013.

With Cabinet Secretary Dan Kazungu, there is a real drive to implement the building blocks necessary to rapidly grow the mining industry in Kenya.”

Base Resources: Beyond Kwale

The mineral sands industry has a maturing ore body profile and new supply will be required over the next four years, and while prices have improved, they need to increase further to support new development and supply.

“Having now significantly reduced our debt we are looking for the right opportunity to apply our design and development expertise to. We are project led, with jurisdiction being more of a screening factor. We are also patient but believe the right opportunities are emerging for us,” concludes Carstens.

Base Resources will be presenting at the Kenya Mining Forum in Nairobi from 4 – 5 December 2017.

All images: Base Resources