Jubilee Metals Group notes that the announcement made by BMR Group reporting that BMR received a letter from the Mining Cadastre Department of Zambia terminating, with immediate effect, the aforementioned mining right in respect of BMR’s Kabwe operation.

BMR also states that the letter received on 7 February 2018 indicates that BMR has 30 days to exercise its right of appeal.

BMR intends to exercise this right as soon as practicable.

“This announcement was totally unexpected and Jubilee was not made aware of any potential challenge to the mining right,” comments Jubilee Metals Group CEO, Leon Coetzer.

“We are doing all things necessary to assist BMR to resolve this matter timeously and favourably.

“In this regard we have made contact with the mining ministry of Zambia to arrange an urgent discussion to clarify the reasons for such a notification and its impact on the Kabwe project.

“Jubilee Metals will also use this opportunity to provide the Zambian Mining Cadastre Department with confirmation of Jubilee’s commitment to BMR, for the immediate execution of the Kabwe project.

“Jubilee will provide further clarity on the Kabwe project and the expected execution program following this discussion,” he continues.

In the meantime, trading in BMR’s shares have been suspended at BMR’s request.

“We had understood that all mining companies in Zambia had received the default notice and we had responded accordingly,” states BMR chairman Alex Borrelli.

“We will now pursue all avenues to rectify this situation as soon as possible and will issue a further announcement when we have further news,” he adds.

Jubilee Metals has invested in a joint venture with BMR for the development of the Kabwe project and has a 29.01% interest in the issued share capital of BMR.

The Kabwe mine was discovered during 1902 and commenced operations in 1904, reaching full-scale production in 1906.

It officially closed down on 3 June 1994 due to its operations becoming uneconomic at that time.

The site was placed under care and maintenance by the national mining company The Zambian Consolidated Copper Mines (ZCCM).

For 88 years of continuous operation until final closure in 1994, Kabwe was regarded as one of the famous mines in Africa and held a key position of national economic importance.

During its life time the mine produced the following:

On closure of the operations in 1994, much of the site area and plant infrastructure was sold in discrete lots to private investors, with the overall responsibility for decommissioning and rehabilitation of the sites retained by ZCCM.

In recent years, the ownership of the Kabwe complex has been rationalised and since 2008 has been steadily acquired by BMR which now owns all the surface rights overs the 705 hectares at the site. 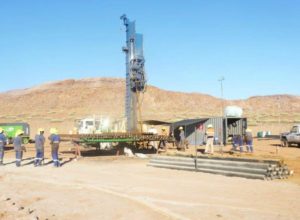