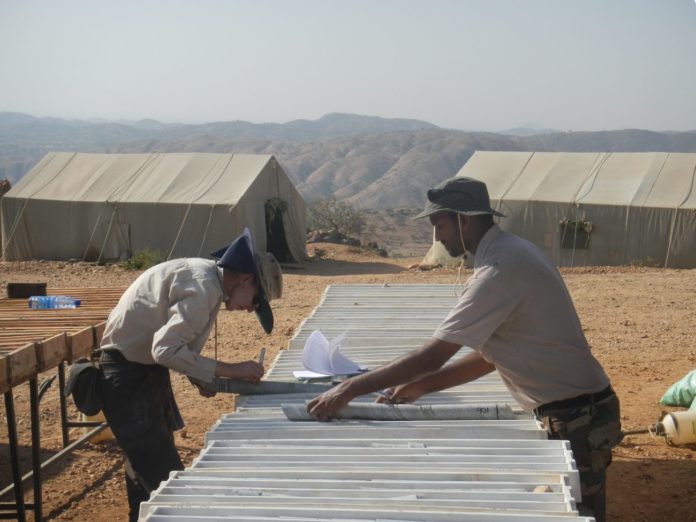 Ethiopia – The final draft permitting documents, as approved by the Harvest Joint Venture Committee, and the mine permit application has been formally submitted to the Ministry of Mines, Petroleum, and Natural Gas for review.

East Africa Metals anticipates that the Ministry of Mines, Petroleum, and Natural Gas’ review will result in a recommendation to the Licensing Commission for approval of the license.

The Terakimti oxide deposit is proposed as an open pit mining operation followed by heap leaching and on site processing to produce gold-silver dore.

The combination of near surface oxide gold and silver mineralisation, hosted in soft rock when compared to other deposits, high and rapid extraction of gold at coarse crush sizes in metallurgical test work along with satisfactory percolation rates all support this strategy for the development of the Terakimti project.

The Terakimti project is located in the Tigray region of Northern Ethiopia, about 600 km north of the capital city of Addis Ababa.

The region has regular air service and very good, modern transportation and power infrastructure. The existing power and infrastructure located close to the project site enhances the development potential of the proposed operation.

The proposed mining operation would utilise grid power for the project, for which the nearest high tension power line is approximately 7 km away.

Primary road access to the site is by paved highway from the town of Shire, 40 km south of the project. Shire has a population of approximately 60 000 people and sufficient services to serve as a base for off-site project activities.

Local surface and groundwater are expected to be sufficient for a heap leaching operation, and the project would maximise recycling of process water.

An independent Environmental Impact and Socio-Economic Assessment (EISA) study has been completed by Beles Engineering of Ethiopia, and forms an integral part of the mine permit application.

This study examined the beneficial and adverse aspects of the proposed mining operation and concluded that the local population is in favor of the project, and the anticipated benefits would be positive and very important to the local community and to the local and regional governments.

The study identified a small number of local farmers within the 2.8 km² project concession that would require relocation so as not to be directly impacted by the mining activities. East Africa Metals will liaise with the affected families and the community to develop a satisfactory resettlement plan.

Based on the findings of the study, East Africa Metals believes it is possible to successfully manage the environmental and social impacts that would occur upon implementation of mining activities at Terakimti.

“Advancing the Terakimti gold oxide project to the permitting stage will mark a significant milestone for company and highlights the excellent performance the Company has achieved with its Ethiopian assets,” says president and CEO Andrew Lee Smith.

The resource at Terakimti shares a similarity with other copper-gold projects in the region, such as the Bisha and Debarwa deposits, in that the initial mining opportunity was defined by the surface gold-oxide resource followed by mining of copper-gold-zinc sulphide resources.

“Management believes that over time, the potential exists for mining at Terakimti to begin with the gold silver oxide and then transition to high-grade supergene copper oxide and eventually the copper-gold sulphide resource,” he explains.

Terakimti will provide East Africa Metals the opportunity to benefit from establishing the first heap leach commercial operation in the country, and generate cash flow to re-invest in exploration and development to grow the company’s resources in Ethiopia, which currently stand at 926 000 gold equivalent ounces in the indicated category plus 860 000 gold equivalent ounces in the inferred category.