ASX-listed Graphex Mining reports on improvements to key infrastructure in south-east Tanzania that support the development of the Chilalo graphite project and that have the potential to materially improve the project’s economics.

The infrastructure improvements, which were seen first-hand during a recent visit to Tanzania with the company’s prospective joint venture partner CN Docking Joint Investment and Development Co Ltd, include: 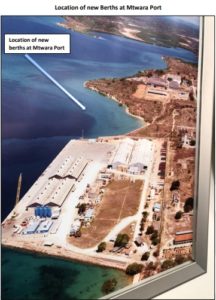 The Government of Japan, through the Japan International Cooperation Agency (JICA), has completed a study on the construction of a 300 MW electrical power generation facility using natural gas in Mtwara.

The proposed project involves the supply and installation of a power generation plant and a 400 kV transmission line from Mtwara to Somanga Fungu in Lindi.

The project, which is estimated to cost US$423 million, will be majority funded by a grant from JICA, with the balance to be met by a contribution from the Government of Tanzania.

The Tanzanian Government contribution has been included in the budget outline for 2018-19.

Tendering of contracts is expected to be finalized in 2018, with construction targeted for completion in 2020.

The Tanzanian Government, through the Tanzania Electric Supply Company Limited (TANESCO), a government owned public utility under the Ministry of Energy with responsibility for the generation, transmission, distribution and sale of electricity, is also constructing sub-stations at Mtwara, Mingoyo and Nanganga to provide for the reticulation of grid power throughout the south-east region of Tanzania.

Following discussions held with TANESCO regarding the opportunity for the Chilalo graphite project to access power supplied from the proposed Mtwara power plant and the arrangements under which this may take place, TANESCO conducted a site survey visit in 2017.

In 2017, the Tanzanian Government approved the expansion and upgrade of the Mtwara Port in order to more effectively handle resources and agricultural products cargo from the Southern Tanzania development corridor and from neighboring countries of Malawi and Zambia.

This involves the construction of two new berths with specialized terminals for handling different types of cargo.

Construction of Berth No. 2, which is 350 metres long and designed for mixed cargo, commenced in March 2017 and is well advanced.

The Port is currently used primarily for the export of cashew nuts in November-March, and is significantly under-utilized for the remainder of the year.

Upgrade of the road from Nanganga to Ruangwa is continuing, with the road initially being upgraded to a high-quality gravel road and progressively sealed with bitumen from Ruangwa.

This would mean that all but approximately 25 km of the route from the Chilalo graphite project to the Mtwara Port will be bitumenised following completion of the road upgrade.

The road upgrade is expected to be completed by 2020.

“The continued commitment of the Tanzanian Government to these infrastructure improvements in south-east Tanzania is particularly encouraging,” comments Graphex Mining MD, Phil Hoskins.

“Not only do such improvements increase the region’s capacity to support industry and deliver improved living standards for local Tanzanians, they are expected to significantly improve the economics of our Chilalo graphite project.”