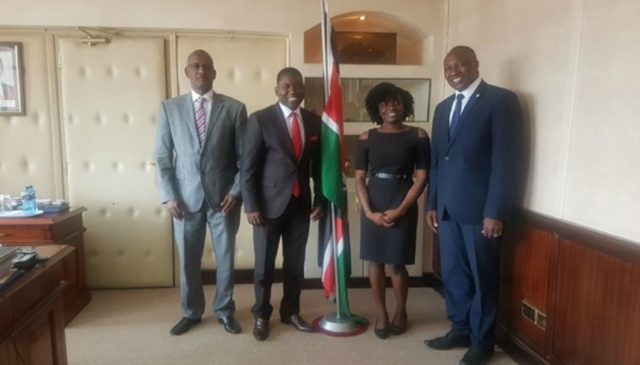 Kenya is among five African countries bidding to host the African Minerals Development Center - currently hosted at the African Union Headquarters in Ethiopia.

Kenyan Mining Cabinet Secretary Hon Dan Kazungu, expressed optimism that Kenya is well placed to win the bid to host the center as this will further boost creation of jobs in the country adding that the President’s support for the Sector has expedited the reforms that are geared towards transforming the Mining and Extractives Sector into a leading revenue earner for the country.

This includes ensuring mineral resources play a transformational role in inclusive growth and reduction of poverty, strengthening partnerships to as well as helping to manage mining performance across Africa.

“In 2016, the cabinet gave the green light for Kenya to formerly bid to host the African Union’s AMDC the top mining policy body in Africa and Kenya has set aside USD $1Million in the 2016/2017 financial year budget,” explains CS Kazungu.

Dr. Frank Mugyenyi, Senior Advisor, Trade and Industry and Kami Omale, a Legal Officer, state  Kenya’s Mining sector would benefit great from having the center should it win the bid.

Kenya’s contenders in the bid to host the AMDC include Zambia, Guinea, Mali and Sudan.

According to the hosting criteria adopted by the African Union heads of state in 2005, the hosting country should ultimately meet requirements such as a conducive political environment and adequate logistical facilities. Hon. Kazungu expressed optimism that Kenya was well placed to win the bid to host the AMDC taking cognizance of the country’s stable and sustainable political atmosphere, the strategic geographical location as a regional hub with an elaborate international connectivity to seven international airports.

In addition, the country’s well-developed infrastructure, tarmacked road network of more than 14 000 km, modernized port facilities and the Standard Railway Gauge were an added advantage.

“It is lamentable that Africa loses US$80 billion annually to illicit trade; the establishment of the center will greatly reduce illicit trade as miners will promote the value of their mineral at the Africa Mineral Development Center”, says Kazungu adding that hosting AU – AMDC is in tandem with the government plan to grow Kenya into a regional hub for mineral promotion and value addition in Africa.

Mining Principal Secretary Dr. Ibrahim Mohamed, shared similar sentiments on Kenya’s potential to host the Centre saying it was feasible considering that the country has scored about 98% of the set criteria by the AU.

The African Union established the center, as a special agency to ensure that all members’ states obtain optimal value and benefits from mineral resources.

Similarly the center will also promote mutual transparency and accountability by both mining companies and the governments.

The AMDC once established and fully operationalized will provide value addition facilities to all miners in an endeavor to enhance the value of their mineral and hence secure their space the competitive world markets.

The Center also seeks to build capacity for the sector.