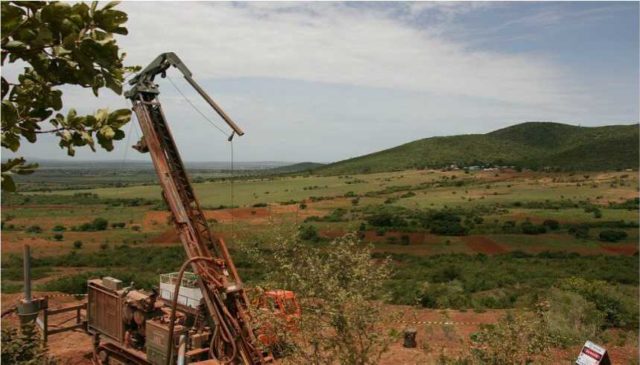 ASX-listed gold and base metals explorer and developer OreCorp is committed to seeing its Tanzania-based Nyanzaga gold project advance quickly up the value chain.

Having recently completed a pre-feasibility study (PFS) showcasing a robust, potentially economic project; the company is now underway with a definitive feasibility study (DFS) which it hopes to conclude towards the end of the year. Should development momentum continue with the same speed, the project may potentially move into construction in 2018, OreCorp CEO and MD Matthew Yates tells Laura Cornish.

Fully established in 2011, OreCorp’s “strong board team” was tasked with looking for and identifying quality mineral assets in Africa, developing them and ultimately building an operational mining company.

“With a reasonable treasury we decided to use the mining downturn to our advantage and in 2012 stepped back from exploration and aggressively pursued a quality asset, which through our team’s experience, could quickly be developed into an operating mine and be well positioned for an upturn in the market,” Yates starts.

Having identified the Nyanzaga project, situated within Tanzania’s Lake Victoria goldfields, as a lucrative prospect, Yates and his team successfully negotiated with owners Acacia Mining in 2015 to structure a deal – and more specifically a joint venture agreement – where OreCorp can ultimately earn up to a 51% interest in the project, which it hopes to do as the project advances forward.

At present the company holds a 15% stake in the project which will increase to 25% following completion of the DFS.

“Nyanzaga is a large-scale opportunity – it ticked all our ‘this-can-be-a-mine’ boxes and with the backing of a skilled management team with 21 years of collective experience in Tanzania, Acacia agreed to advance this project forward in conjunction with OreCorp.”

Worth its weight in gold

With a 100 Mt resource, averaging slightly above 1 g/t, Nyanzaga was originally considered to be a bulk tonnage, low grade deposit. It would have required massive capital to deliver huge tonnages and throughputs. “We immediately knew this was not feasible at the gold price at the time which was just above $1 000/oz,” Yates points out.

“We re-logged the core samples and rebuilt the geological model focusing on high grade zones within the mineralised envelope.” The company was subsequently able to increase the project’s average grade to 3.5 g/t and define a JORC-compliant resource which to date totals 3.3 Moz.

A scoping study (undertaken between April 2016 and August 2016) was followed quickly thereafter by the PFS which was released in March this year. It demonstrates a “high level of refinement and maturity” when compared to the scoping study Yates notes, because the results differ only slightly, “which seldom happens in this sector.”

Discussing the highlights of the PFS, the CEO says Nyanzaga will produce 213 000 ozpa of gold (or 2.5 Moz in total) for 12 years from a 4 Mtpa ROM throughput in a conventional carbon-in-leach (CIL) process plant, “this is a significant volume of gold and a significant lifespan for a new start-up operation.”

The pre-production capital cost has been estimated at US$287 million. The PFS – based on a $1 250/oz gold price – is based on a high proportion of measured and indicated resource material, accounting for 83% of the total mineral resource estimate.

Yates is particularly proud of the high level operating and capital costs consistency between the scoping study and the PFS, noting only a slight increase in capex ($35 million) which will result in achieving high recoveries, 88% as opposed to 85%, and an extra 13 000 ozpa from a larger open pit operation.

The all-in-cost cost also dropped 2% from $874/oz in the scoping study to $838/oz in the PFS and the decision to build a combination open cast and mechanised underground mine remained the chosen development preference. “These results clearly demonstrate that Nyanzaga is has the potentialto be an excellent mine,” Yates reiterates.

The PFS indicates that construction of the open pit (+-3 Mtpa) will commence first followed by underground mine (+-1 Mtpa) development in year 1 and access to underground ore in year 2.

Although accessing a single ore body, the underground mine will be opened via a box cut development adjacent to the pit so as not to interfere with open cast mining operations. The two mines will run concurrently.

And while the known resource from surface extends to a depth of 800 m, Yates notes that the mineralisation remains open at depth “and I’m certain extends for at least another 1 km.”

At the end of March OreCorp announced the placement of 43 million ordinary shares of the company at an issue price of A$0.48 per share to institutional and sophisticated investors in North America, Europe and Australia to raise gross proceeds of A$20.6 million. On completion of the placement, OreCorp’s cash position will increase to approximately A$29 million.

Proceeds from the placement will be used to fast track the various planned feasibility, development and exploration activities at Nyanzaga including:

Speaking in detail about the way forward, Yates notes that OreCorp still needs to convert its current prospecting licence to a mining licence which it will apply for later this year once it attains its environmental certificate.

“We believe our mining licence will be granted towards the end of this year or start of 2018. And if the gold price doesn’t fluctuate too far from where it is currently, we will likely be in a position to start building the mine next year as well.”

There is also a focus on adding shallow high grade ounces proximal to Nyanzaga to supplement its base load feed and to date a regional soil sampling programme has delineated 20 distinct gold-in-soil anomalies.

One specific anomaly – Bululu – has revealed significant mineralisation from surface and is shallow depth over a 250 m strike which is also open down dip and along strike, with peak gold values of 5.35 g/t gold for over 4m.

Ideal location in Africa to build a mine

Having worked in Tanzania extensively over the years, Yates says the country is one of the best jurisdictions in Africa to build a mine – where a number of operating mines already exist which have contributed to the establishment of supporting infrastructure in the country.

The Lake Victoria Goldfields alone is a major gold producer and has historically produced ~20 Moz of gold. There are >40 Moz of gold reserves and resources within a 100 km radius of Nyanzaga.

“We have access to a road only 7 km from site, and access to Lake Victoria (also 7 km away) from where we can pump water which is standard procedure for other mines in the vicinity. There are power lines to the north and south of the mine and second generation in-country skilled labour as well.”

The company in fact has employed five graduate geologists from the Dar Es Salaam University. “Tanzania offers a level of industry maturity which only adds to the exceptional quality of this project.”

Yates also adds that government has welcomed OreCorp into the country and as such “we have enjoyed good dialogue with all levels of government.”

Mauritania a second arm in the growth strategy

OreCorp is eagerly focused on advancing its 90% owned Akjoujt South nickel-copper discovery in Mauritania, a project which has been part of the company’s portfolio since its inception. “We are ‘explorationists’ at heart and believe the key to a successful discovery lies in geology.

And thanks to the mapping, geochemistry, diamond drilling, trenching and recent electromagnetic survey work we’ve completed, we believe the potential to uncover a significant nickel-copper discovery is high – with values to date of more than 1% nickel and copper.”

The recent survey, which specifically focused on an area known as Anomaly 5, identified drill targets which have the potential to host significant nickel-copper mineralisation Yates reiterates. Two preliminary conductor plate models will refine potential targets for the siting of drill holes as the company embarks on a drill programme which aims to test both plates to an approximate depth of 100 m.

While Yates notes that Nyanzaga is the priority focus for the company, it believes Akjoujt South represents another arm in the company’s growth strategy focused on transforming from an exploration company to a mining company.