LSE-listed Petra Diamonds has announced the temporary suspension of operations at its Williamson mine in Tanzania after a government seizure of its diamonds.

The government of Tanzania has indicated its intent to nationalise the diamonds seized from Petra Diamonds, which the Tanzanian government’s Diamonds and Gemstones valuation agency estimated were worth $14.7 million.

Tanzania’s Finance and Planning Ministry disputes that valuation, saying the diamonds are worth $29.5 million.

In a statement, the Finance and Planning Ministry said that it would be launching a probe into irregularities around the valuation of Petra Diamonds’ diamond exports. These developments are credit negative for Petra Diamonds and will dent group profitability and adversely affect the company’s ability to meet its December 2017 bank covenant test.

Although Williamson contributes less than 5% to Petra’s EBITDA, and key personnel are in discussions with the government to resolve the matter, Petra Diamonds may be forced to put the mine on care and maintenance until it finds a suitable solution.

The loss of revenue would make it likely that Petra Diamonds would have to seek a waiver from its banking consortium, as it has in the past, for its December 2017 bank covenant test. Putting the mine on care and maintenance would slow the company’s deleveraging momentum, although not materially. 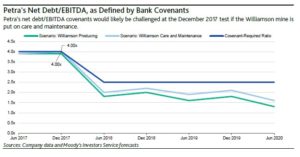 Petra Diamonds’ banking covenants are tighter than usual for a B1 mining company, which makes any deviation in
Petra Diamonds’ business plan immediately transparent to the banking consortium of South African banks.

The Tanzanian government’s Diamonds and Gemstones valuation agency, not Petra Diamonds, make the provisional
valuation of diamond parcels from Williamson before they are exported to Antwerp, Belgium.

The government also has full oversight of the diamonds produced at the mine, and physical controls by a number of different government representatives in conjunction with Petra Diamonds from the point of recovery until
the point of sale.

The government intends to double the mining sector’s contribution to GDP to 10% by 2025. In July 2017,
Tanzania increased royalty rates to 6%. Williamson was previously subject to a 5% royalty.

All final royalty payments to the Tanzanian government are based on the diamonds’ actual sales results in Antwerp.
Tanzania’s diamonds and gemstones agency monitors the sales process.

The Tanzanian government in July 2017 also added a 1% levy on all mineral exports from country.

Tanzania President John Magufuli in a television broadcast announced a review of Petra Diamonds’ diamond mining contract, which could have far reaching implications for the company.

The government also alluded to gross irregularities over its dilution of its original 50% stake in the mine.

We expect that Petra Diamonds will continue to engage constructively with the Tanzanian authorities, but cannot predict how long the valuation dispute around the diamond exports will take to resolve. It is too early to assess the consequences of the government investigations into other irregularities.