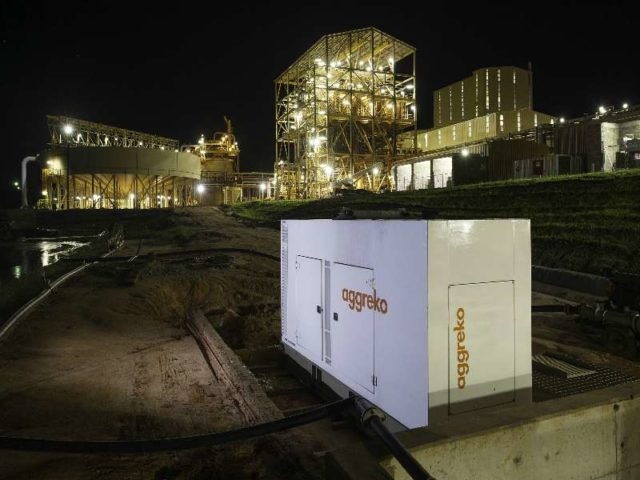 The mining industry is one of the most energy-intensive industries globally, a situation that is compounded by its intensive use of fossil fuels to power its operations.

The energy transition, which has seen a global shift toward reducing energy-related carbon dioxide emissions in a bid to limit climate change, has meant that the resultant pressure on the mining sector to reduce its carbon footprint remains unabated, Aggreko Africa MD JOHN LEWIS tells CHANTELLE KOTZE.

Against the backdrop of volatile commodity prices, which is affecting many mining companies’ ability to invest large amounts of capital to “keep the lights on”, they still need to keep their operations running smoothly by improving efficiencies now more than ever before.

Mine operators are therefore facing a dilemma: How to integrate renewable energy into their power solutions in an environment where investment is hard to come by.

Lewis says that mining companies can now avoid the massive capital expenditure by making use of flexible, modular power solutions on a rental basis, which provides more financial flexibility than outright equipment purchase and allows capacity to be quickly adapted to the changing needs of a mine’s life-cycle.

“We often find that even when mining companies have capital available, they would rather invest it into digging ore from the ground, which is worth more to them than running a power plant,” explains Lewis.

Hybrid solutions: A step towards decarbonisation

Hybrid power plants, which combine cost-effective and renewable energy and battery storage with the reliability of thermal energy have been growing in popularity over the past few years.

Hybrid energy solutions have become the go-to choice for mining companies seeking safe and stable electricity, especially in remote areas, as they aim to reduce a mine’s diesel consumption, energy costs as well as carbon footprint.

“The use of hybrid power solutions at mines is only set to increase,” says Lewis, as mining companies have found that hybrid energy solutions provide them with the agility needed to respond to the quickly-evolving energy landscape and the rapidly changing mining industry, while still delivering on the decarbonisation agenda.

Having delivered energy solutions for over 20 years, Aggreko provides a range of temporary, through to longer term, modular energy systems that are deployable anywhere, no matter how remote.

Over the past few years, this has grown to include the supply of energy solutions directly to industrial companies in need of enhancing their current power systems or looking at an alternative to grid power. These industrial companies include mining houses, oil and gas producers as well as general heavy industry.

In 2017, Aggreko acquired an energy storage company Younicos, enabling the company to evolve its strategy into hybrid energy solutions. This allowed Aggreko to introduce renewable energy and battery storage into the thermal-only power mix, explains Lewis, noting that this allowed the company to unlock efficiencies within the energy mix while also fulfilling the green agenda and next generation of environmental obligations.

A golden opportunity at Syama

Africa-focused gold miner Resolute Mining’s Syama gold mining complex in Mali is an example of how Resolute used a hybrid power plant, on a rental power basis to de-risk the investment into greener energy without having to invest capital into the power solution.

Aggreko signed a 16-year hybrid power plant contract with Resolute to install, operate and maintain a thermal, solar and battery power system comprising a 40 MW thermal power plant and a 10 MW battery storage system, with a further 20 MW of solar power planned in 2023. Work on the power plant is currently underway, with the first delivery of power being targeted for Q4, 2020.

Phase 1 of the two-phase power plant will see the installation of three Wärtsilä Modular Blocks, providing a total of 30 MW of power, next to the existing 10 MW power station (which Aggreko installed on site in 2015 as a rental power solutions) and 10 MW Aggreko Y.Cube battery storage system for spinning reserve displacement in 2020.

Meanwhile, Phase 2 will see the installation of an additional 10 MW Wärtsilä Modular Block in 2022 and a 20 MW solar power system in 2023.

Once the solar system is installed, the batteries will also smooth out fluctuations in the solar power system to facilitate integration into the hybrid system, explains Lewis.

Moreover, there is space to accommodate a fifth 10 MW Wärtsilä Modular Block, enabling the mine to add additional power capacity if needed in the future to support growth or expansion plans.

The hybrid solution will reduce Syama’s power costs by an estimated 40%. Once all the renewable power sources are fully installed, it will also reduce carbon emissions by approximately 20%.

In 2019, Aggreko also deployed a two-phase off-grid solution in Sudan for Moroccan mining group Managem at the Greenfield Wadi Gabgaba gold mine.

The first phase entailed the supply 12.5 MW of power while the second phase would see an additional 14.5 MW of power added to the mine, to keep up with the operation’s expansion. The solution entails the installation of 13 diesel generators and 2 to 4 MW of solar hybrid energy to be commissioned in future.

Moreover, in late 2018 and in 2019, Aggreko deployed a 60 MW power solution to diversified mining company ERG Africa in the Democratic Republic of Congo as well as a heavy fuel oil power solution to gold miner Kinross’ Tasiast gold mine in Mauritania.

Whether it be a short-term project which entails securing early power to site, a long-term power provider, or the provision of standby, back-up power when the grid fails, Aggreko has the African experience required to provide support at every stage of the mining lifecycle.

Active in about 25 countries in Africa – the company has depots (short-term, locally deployed fleet) in six countries including South Africa, Kenya, Tanzania, Angola, Nigeria and Ghana. The company deploys power solutions on a short or long-term project basis   depending on a client’s need.

Africa accounts for US$250 million of the company’s annual turnover – about 20% of which comes from the mining industry. A large part of this also comes from Aggreko’s direct power deployment to national governments, where it acts as a significant power generator to the national grid in countries such as Malawi where it generates approximately 50% of the country’s power supply and in Burkina Faso where it generates one third of the country’s energy requirement.

Moreover, the company has experienced 25% year-on-year growth in its industrial power supply business over the past few years, by helping companies with specific high energy needs fill the gap to ensure energy security.