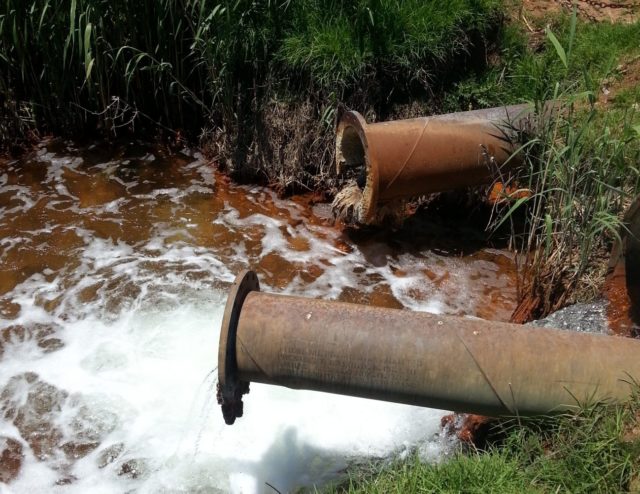 With a combined pumping and treatment capacity of 229 Mℓ/day, the successful delivery of three acid mine drainage treatment plants across the Witwatersrand Western, Central and Eastern Basins between 2012 and 2017 are today effectively preventing millions of litres of toxic water from decanting to surface.

But, with high volumes of salt still contained within the treated water, additional treatment technology is required to purify the water further but awaits the green light from government to implement, writes LAURA CORNISH.

Decades of mining on the Witwatersrand over time created an underground void of about 1 billion cubic metres which posed no threat when mines were still active in the region to pump and neutralise the water.

However, when mining ceased, the pumping stopped, and voids have been steadily filling with water ever since which is exposed to sulphide bearing minerals to form acid mine drainage.

The situation reached crisis point when in 2010 acid mine drainage started decanting to surface on the West Rand and quickly polluted the Tweelopiespruit which ultimately feeds into the Hartbeespoort Dam.

It was at this point that government-owned, bulk raw water infrastructure company Trans-Caledon Tunnel Authority (TCTA) was mandated by government to effectively stop the decant of acid mine drainage on the West Rand and prevent it in the Central and Eastern Basins.

Situated from Randfontein in the west to Nigel in the east, the three existing plants use a high density sludge process to remove the metals from the water.

Their purpose however was to effectively provide a short-term solution – the prevention of acid mine drainage decanting to surface.

“They still require additional technology to remove high salt levels in the water which is in essence mainly flowing into the Vaal River, one of South Africa’s primary water sources,” says TCTA acid mine drainage project manager Craig Hasenjager.

Having determined the necessity for a plant at each of the basins, the Western Basin plant was prioritised to stop the acid mine drainage decant. It was delivered quickly thanks to the Sibanye-Stillwater’s offer to make use of an existing plant.

With the necessary upgrades and incorporation of a new pump station, that can pump 70 Mℓ/day, the 35 Mℓ/day plant became operational in August 2012 and successfully stopped acid mine drainage decanting to surface.

“The Tweelopiespruit has since returned to a habitat safe for wildlife,” Hasenjager notes.

The Central Basin plant (situated in Germiston), was built in 2013/2014 and moved into operation towards the end of the year.

It has the capacity to treat up to 84 Mℓ/day and was at the time the largest acid mine drainage treatment plant in the world. The sludge produced is co-disposed with DRDGold onto its existing Brakpan tailings facility.

Having underestimated the ‘power’ of the sludge, Hasenjager admits that TCTA has encountered some operational challenges on the plant, specifically with the thickener rakes, aerators and mixers.

“But we have upgraded and repaired the equipment and the plant is now operating according to its designed parameters,” the project manager confirms.

The Eastern Basin plant, located in Springs, today holds the record as the largest acid mine drainage treatment plant in the world. It is designed to treat 110 Mℓ/day and has been operational since 2016.

While TCTA looks to conclude a co-disposal agreement with DRDGold for the sludge generated from this plant, it has used the time to conduct an experiment to evaluate what happens to the sludge over time – which has the additional benefit of determine a suitable method for depositing the sludge it is currently generating.

“Thanks to an existing pump station around 760 m below surface, and intact pipe infrastructure running to surface at the Grootvlei shaft, we successfully pumped the sludge down into this void for a year.

“Through water monitoring technology we determined that there is only a small amount of sludge at the bottom of the void with relatively clean water at the top,” Hasenjager outlines.

This plant has been TCTA’s greatest success to date and incorporated all of the lessons learnt from the first two treatment plants.

The acid mine drainage levels on the Eastern Basin are now below the company’s earmarked 15 m buffer zone which is below the environmental critical level and so does not require pumping during peak hour periods.

“Our intention is to achieve a similar result at both the Western and Central Basin plants.”

The treated water entering the catchment areas still contains very high salt levels and the removal of these salts has since the start being earmarked as a necessary extension for a long-term acid mine drainage treatment solution.

Government in early 2012 conducted a feasibility study to determine the best solution to remove the salt.

“The feasabilty team looked at the existing passive, biological, chemical and physical treatment technologies available on the market as part of their consideration to find the most cost effective and technically sound solution,” Hasenjager points out.

The feasibility study recommended that the only proven technologies at the time, included ion exchange (the preferred option to recover uranium, high density sludge for neutralisation (currently being used in the existing plants) and reverse osmosis for desalination (to remove the salts).

When asked about waste products, TCTA recommended that best solution would be to continue with the co-disposal of the sludge on all three plants, and the installation of brine ponds as recommended by the feasibility study at the existing plants would cater for the brine.

“The water would evaporate, enabling us to collect the salt to dispose of.”

The feasibility study also determined that a design, build, operate and maintain model of contracting (DBOM) would prove the most effective implementation – for at least 15 years – where after new technologies could be considered.

Implementation of the phase two long-term solution is currently on hold pending a technical review by the Department of Water and Sanitation on the impact of the treated water currently released into the VRS. The outcome of the review will inform the timelines for implementation.

“To counter the impact of high salt loads in the Vaal River system which may require costly fresh water releases from the Vaal Dam, will require the implementation of a long-term desalination solution,” Hasenjager concludes.