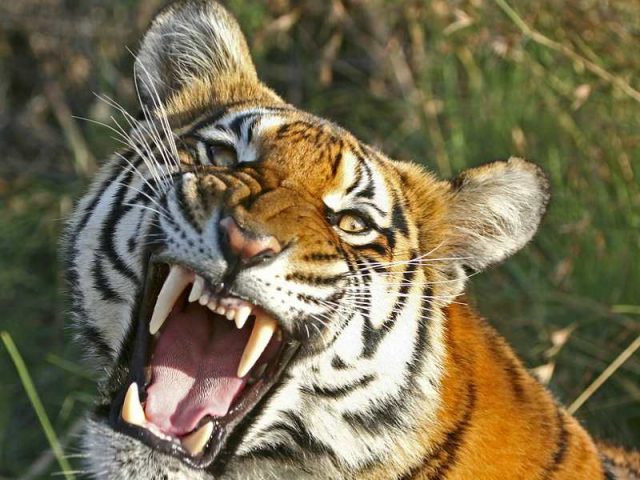 According to the World Wildlife Fund, South China tigers area “critically endangered” species and considered “functionally extinct” having not been sighted in the wild for more than 25 years.

The non-profit Laohu Valley Reserve near Philippolis in the Free State, South Africa, has dedicated its resources to growing the South China tiger population, with the ultimate intention of re-wilding them in their origin home in China.

LAURA CORNISH visited the reserve to learn about the project which one of South Africa’s major crushing contractors, African Mining & Crushing (AMC) is supporting.

Although the smaller breed South China tiger is not a native species to South Africa, it is the ideal location to help repopulate a species that has shrunk from around 4 000 in the late 1950s to just over 120 today.

Sadly, none of these 120 tigers live in the wild, but are all documented zoo residents.

In spite of this, South Africa and the Free State in particular, through the reserve, is playing a critical role to reverse the situation – by providing an environment to encourage breeding of the South China tiger.

More importantly, the intention is to send the rewilded tigers back to China. This initiative, at the time, was the first re-wilding programme ever established and is still a first of its kind.

Choosing to undertake the project in South Africa’s Free State province does make the process more complicated but at the same time offers a number of benefits as well – reduced land costs, an abundance of wild prey and access to wildlife conservation experts.

“A study was also completed at the start of the project, confirming that the tigers could acclimatise between the two regions without difficulty,” Heinrich Funck, reserve general manager states.

“This is a major undertaking, both the skills and resources to sustain and nurture a growing group of South China tigers is substantial but also the costs associated with running the reserve and maintaining it as well,” says CEO of AMC Warwick Hughes.

“In support of this venture, the company contributes approximately one third of the total running costs of the reserve through various initiatives.

Funck reveals that the project was conceptualised by a married couple.

Originating from China, wife Li Quan was inspired by South Africa and husband, Stuart Bray invested about R35 million in the early 2000s to establish the reserve – which entailed acquiring 17 sheep farms and substantial infrastructure installations and upgrades.

Today, the reserve is owned by a trust, controlled by an independent set of trustees who contribute towards the management of its assets.

The reserve at 33 000 ha in size is massive and there is sufficient game to sustain 40 tigers. A section was fenced off where the tigers are kept and four hunting camps were established for the tigers to hone their natural instincts to hunt.

Four six-month old tigers were introduced into the reserve when it was fully established in 2003, which has since then grown to 23 (including three cubs born in 2019).

Having established the reserve in collaboration with the Chinese government, the agreement required that China build its own reserve to where the tigers would be released into the wild.

While China has yet to fulfil this element of the partnership, the reserve has maintained close ties with the country through its’ beneficiary Save China Tigers UK based in the UK.

While Save Chinas Tigers UK continuously engage with the Chinese government and private business people in China who might help influence the government to establish their reserve, they are also looking for sponsors who might assist with the financial requirements to establish it.

The mining industry is an ideal sector to contribute towards such initiatives that shine a light not only on endangered species awareness and protection but also biodiversity enhancements in South Africa.

“Sponsors such as AMC are a vital component in providing the funds necessary to keep the reserve afloat. The reserve does cater to hunters, who in most instances donate the meat to the tigers. The associated financial contribution from this is also injected back into the reserve,” Funck explains.

Fortunately, the reserve’s ecosystem of wildlife is abundant – and enough to feed each tiger the equivalent of a Springbok every three days, for up to 40 tigers,” says Funck

The future of the Laohu Valley Reserve’s tigers

The average lifespan of a South China tiger in the reserve is about 20 years, but in the wild is closer to 12. This means that for an effective re-wild programme to work, the tigers need to be relatively young when relocated. While the original tigers have passed their prime age, the younger tigers are ready to make that move.

“We hope to build a strong awareness around this initiative in the hopes that we can generate support for the reserve and the establishment of the necessary support structures in China,” Funck concludes.