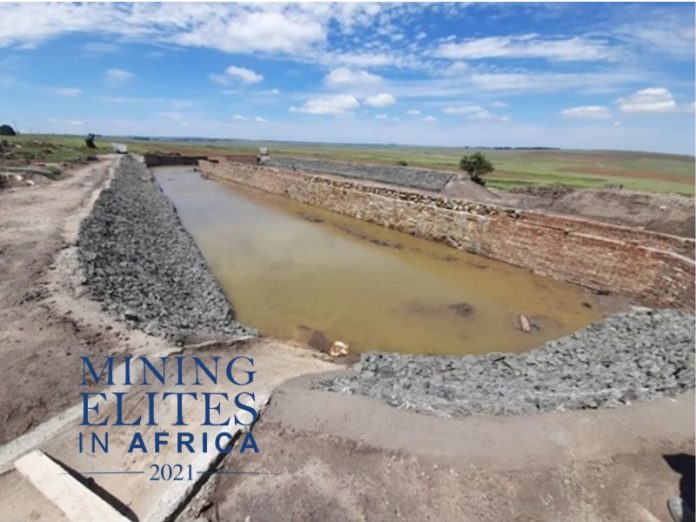 Pollution of the environment by human activities has left a legacy of negative environmental impacts, often with a widespread and serious effect.

While the mining industry remains an important driver for economic development and growth, its negative impacts cannot be ignored.

These environmental impacts are a particular focus of South Africa’s Council for Geoscience (CGS), looking at both the physical transportation of hazardous materials such as dust and asbestos, and the chemical changes caused by mining, which generally lead to the leaching of minerals and the release of pollutants into water bodies.

In some instances, natural groundwater resources are contaminated by processes such as leaching of certain minerals.

Borehole clogging due to iron and manganese biofouling is a problem in primary and secondary aquifers worldwide, including South Africa.

Biogeochemical processes due to the ingress of oxygen through pumping cause borehole clogging in aquifers with high concentrations of bivalent iron (Fe2+) and manganese (Mn2+), threatening the quality and availability of this resource.

Within South Africa, most interventions/technologies depend on costly, surface (ex-situ) infrastructure to remove iron and manganese from groundwater.

The CGS is conducting a study on an alternative treatment for resolving borehole clogging related to iron and manganese build-up. The treatment procedure as patented by the CGS (registered South African Patent No.2015/08887) comprises injection of ozonated water (as an oxidant) into boreholes, located at various distances up to 10 m up-gradient of production boreholes.

When the ozonated water approaches a borehole, the redox chemistry changes from reducing conditions to oxidising conditions.

Soluble manganese (Mn2+) is then oxidised to form manganese dioxide MnO2 and ferrous iron oxidises to ferric iron and then hydrolyses to form Fe (OH)3, which is a particulate and can be removed by standard filtration or which attaches to surfaces within the aquifer.

The treatment has managed to reduce the levels of iron and manganese from the Atlantis Aquifer system to within the relevant water quality guidelines, confirming the feasibility of in-situ iron and manganese removal using the CGS system.

Passive treatment of polluted mine water

The generation of acid mine drainage (AMD) is a problem related to mining activities throughout the world. In South Africa, the most serious AMD problems occur due to gold and coal mining, with AMD continuing to be generated – thus contaminating the environment long after mining activities have ceased.

This treatment technique is usually associated with low costs of operation and a low frequency of monitoring and maintenance. In addition, since they rely on natural ameliorative processes, they can be integrated into the natural landscape.

Up to now, in South Africa, the application of passive treatment for the amelioration of contaminated mine water has largely been demonstrated at a pilot and laboratory scale.

Following successful bench and pilot stage, an up-scaled passive treatment system is currently being installed by the CGS at a legacy coal mining site in Mpumalanga to treat acid mine drainage.

Asbestos fibres pose a high risk to human health due to their high inhalation potential and the serious respiratory problems (asbestosis and mesothelioma) related to their inhalation.

Abandoned asbestos mines are generally a significant source of asbestos exposure to their surrounding areas. An integrated asbestos study was undertaken between 2014 and 2018 to assess the success and shortcomings of measures put in place to protect surrounding communities.

The study identified high risk areas and highlighted the airborne route as the main risk of exposure. Amphibole asbestos (crocidolite and amosite) minerals were identified in Limpopo and the Northern Cape, while serpentine asbestos (chrystotile) was found in Mpumalanga.

The study identified the shortcomings of the rehabilitation processes at some sites, many of which are in close proximity to rural communities, posing a risk of continuous exposure.

The study made preliminary site-specific recommendations that include rehabilitation, maintenance and care of the identified asbestos dumps.

Coexistence of mining and the environment

Coexistence as a concept primarily focuses on the existence of two entities existing at the same time and/or in the same location, and exploring the symbiosis between them as they compete for resources.

The CGS’s research on coexistence of mining and the environment is aimed at investigating sustainable solutions which can enable mining with minimal to no adverse or irreversible damage to the environment.

The purpose is to ensure environmentally responsible mineral extraction, through establishing best practice and standards throughout the life cycle of the mine.

In a mining context, coexistence therefore is underpinned by sustainability principles, following a system approach where economic, socio-political and natural systems (ecosystems) are integrated by governance through regulation and policy.

The CGS is in the process of investigating the applications of innovative and disruptive technologies related to treating and reducing waste, reducing CO2 emissions and the environmental footprint of mining, as well as alternative mining methods.

This includes automation and 4IR technologies such as the internet of things. This in part is tackled through developing a GIS based online platform which is a national database integrating biophysical datasets and mineral commodity datasets in order to enable strategic planning of future mining activities that will benefit the economy and the environment.

Through these and other projects, the CGS is assessing the remediation of the legacies from historical human activities, improving governance of current activities and keeping an eye on future use of natural resources, within environmental limits.

Innovative and systems approaches are encouraged to improve environmental stewardship.