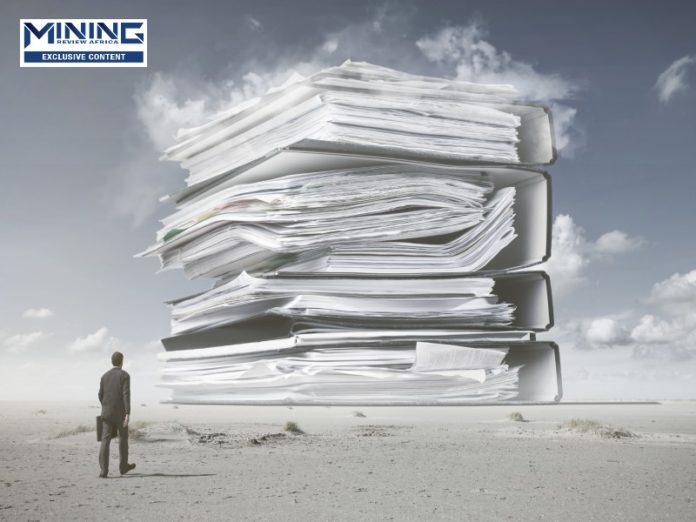 Mining companies in South Africa face an arduous task when it comes to securing a water use licence. This is mainly due to laborious legislative processes that create bottlenecks. What are the stumbling blocks and how can these be overcome?

According to Rapson, the major stumbling block hindering the issuing of a water use licence is the determination of water reserves. Reserves are the minimum amount of water that needs to stay in a water resource. For starters, the National Water Act says that that the Minister of Human Settlements, Water and Sanitation has to gazette reserves for all water resources in the country. However, he explains that there’s a long process that needs to be followed to get to that point.

“The department needs to go through a specific scientific procedure to determine the reserve for any water resource in the country. Today, I don’t believe that any final reserve has ever been published by the department. And that is the number one stumbling block to all these licence applications, because the law says that the reserve has to be taken into account before a licence can be issued,” he states.

A myriad of technical information

Rapson adds that because of the delays of final reserves being published, the department has to determine a preliminary reserve for every water use licence application that it is issued in the country. This, he explains, is not an easy process and takes time.

When the Act was drafted, it made allowances for the regulation of water usage at a catchment level. Catchment areas cross provincial lines and consider a water resource in its entirety. According to the Act, these are supposed to be controlled through the establishment of catchment management agencies who will be responsible for issuing water usage licences in their respective catchments.

READ MORE ARTICLES ABOUT THE ENVIRONMENT

However, Rapson points that this has been an extremely slow process. “There’s only been a handful of catchment management agencies that have been established in the country and not a single one of them has the powers to issue licences,” he states. As such, every licence that is issued by the department must be processed at a national level and signed off by the minister, adding further delays to the process.

Kilner adds that that while the Act has better defined the process of obtaining a water use licence, it remains an administrative challenge, hence the backlog. “In fact, this backlog has resulted in many mining companies operating without a water use licence for many years. I think the department is a bit overwhelmed. It’s also quite a technical process – not just a matter of a mining company simply submitting an application outlining their water requirements. There are all kinds of technical assessments that need to be done and there also needs to be public participation. So the process itself tends to be a bit laborious,” she states.

Rapson points out that because a licence application is so detailed, it can comprise upwards of 10 level arch files in some instances. “The applications themselves contain a host of technical specialists’ input. For example, for any application, you would need to prepare a salt balance report, present the findings of a geohydrological study as well include surface impact assessments.

“Also, if you’re going to build any storage infrastructure on your site, whether it’s dams or waste areas, you have to get your technical design signed off by the department.” To further add to application delays, Rapson states that there is only a single person in the entire country that can sign off on the detailed technical designs of storage facilities. “So, you can imagine if you have one man that signs off on every single design in the country, delays are inevitable.”

Kilner further points out that the country’s current water crisis also has an impact on the determination of water reserves. “Also, there are challenges from competing industries and NGOs who will really scrutinise what the department is doing and what it authorises. So, there really has to be a careful balancing act, which feeds into the amount of time that is taken to process these kinds of applications and make sure that the right processes are followed,” she adds.

Speaking at Mining Indaba last year, President Cyril Ramaphosa made a declaration that government is committed to streamlining the water use licence process, reducing the application process from the current 300 day period down to 90 days.

Sadly, while the declaration has been made, and although water use licensing application regulations have been published which talk to the 300 day limit, this is difficult to achieve. “It’s all well and good to say you want to truncate the process, but if you have all of these kinds of inherent stumbling blocks, it will be difficult to live up to those promises,” says Kilner.

Both Rapson and Kilner agree that the way forward is to implement the actions to determine the reserves throughout the country and establish the catchment management agencies. In this way, there will be no bottlenecks at a national department level and the process of issuing water usage licences can be expedited.