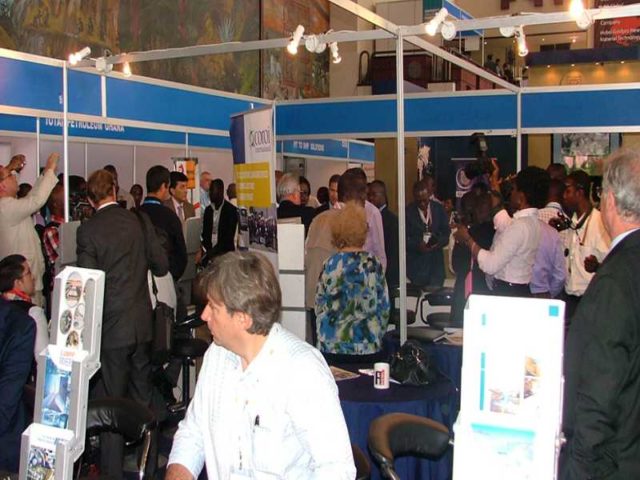 Mining industry leaders and government ministers from across West Africa alongside exhibitors from around the world will be in Accra on May 30 for the first day of the region’s premier mining & power expo and conference.

His Excellency the President of the Republic of Ghana President Nana Akufo-Addo is the special guest of honour at WAMPOC & WAMPEX, marking the 90th anniversary of The Ghana Chamber of Mines.

More than 1,000 people are expected at the International Conference Centre in the nation’s capital over the three-day days where international exhibitors will join local companies showcasing products and services for the mining and power sectors.

There has been a surge in international exhibitors as mining recovers from the slump of the past three years.

Proof of this renewed optimism is reflected the exhibitors to WAMPEX 2018:  there will be 25 suppliers from India at the expo and the South Africans will also be in Ghana with an exhibitor delegation backed by the government.

West African mining has seen renewed confidence over the past 12 months as both government and the private sector pledged investment and support, according to Brad Hook, Commercial Director for dmg events, the co-organisers of the event in Accra

“It’s a growing market In Ghana the annual mining procurement spend, upstream of the value chain, is around $1.2 billion – that’s almost half of the $2.6bn total for West Africa,” he said.

Exhibitors include engineering and environmental consultancy Knight Piesold. “WAMPEX 2018 is the largest forum which provides a good opportunity for stakeholders in the mining and power industries,” said company spokesperson Sally Arko.

Interplast Ltd has operated in Ghana since 1970 and is now the region’s biggest supplier of plastic piping. The company’s Elizabeth Owusu Gyebi said: “We are at WAMPEX to expands our customer base, make new contacts, increase sales, be known and visible to industry players and to build stronger relationship with stake holders in the mining sector.”

Another exhibitor is Genser Energy Africa, an independent power producer, specialising in energy generators across the continent, but especially mines. “We provide power for two mines in Ghana and we are part of the country’s mining industry, that’s why we are at WAMPEX,” said spokesperson Frema Osei Afriyie

The Chamber is an organising conference partner for WAMPOC 2018 and Sulemanu believes mining in his country must play a key role in national development as well as the economies of countries cross West Africa. He said the conference brings together those people who can drive change.

“This remains an international networking conference and exhibition for the mining and power industry in West Africa that brings together captains in those sectors, high-powered government officials from West Africa, international and local investors, NGOS, researchers in academia and traditional leaders.”

For more details of the expo and conference go to www.wampexghana.com.

WAMPEX 2018 runs from Wednesday May 30 to June 1 at the Accra International Conference Centre, Accra, Ghana. After 24 years WAMPEX has become a major forum for the international mining and power industries, a showcase for those exhibitors who will meet key figures from the mining and power sectors, as well as senior government ministers. More details www.wampexghana.com

The WAMPOC 2018 conference is organised by dmg events MEA in partnership with Events & Projects International (EPI).

dmg events Middle East, Asia & Africa was founded in 1989 and has operated in the Middle East since 1995 and owns some the region’s biggest shows including The Hotel Show and The Big 5. Headquartered in Dubai, UAE and with satellite offices in India, South Africa and the UK, dmg events Middle East, Asia & Africa organises more than 80 events across the Middle East, Africa, Asia, North America and Europe. The events attract more than 250,000 customers every year and provide opportunities for trade professionals to do business, network and learn. For more information visit www.dmgeventsme.com

DMGT manages a balanced multinational portfolio of entrepreneurial companies, with total revenues of almost $3bn, that provide a diverse range of businesses and consumers with compelling information, analysis, insight, news and entertainment. The company employs more than 10,000 people and is listed on the London Stock Exchange.  DMGT aims to provide the highest quality information, insight and services to attractive growth markets in innovative ways, building on a track record of earnings and dividend growth. For more information visit www.dmgt.com