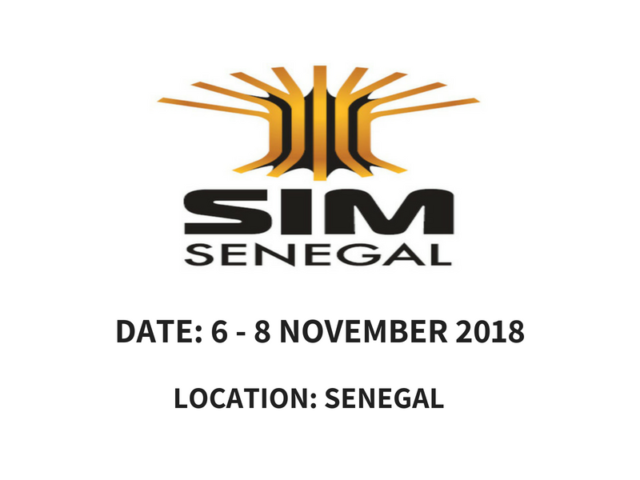 SIM Senegal is a bi-annual mining event organised by the Ministry of Industry & Mines, Senegal in association with AME Trade Ltd. The event has established itself as one of the largest mining events in West Africa and is the only event supported by the Senegalese government dedicated to expanding the country’s mining sectorproviding unparalleled insight into the new mining code implemented in March 2017.

Sim Senegal 2018 is deeming to be huge success yet again with the previous edition (SIM Senegal 2016) attracting +1500 participants from 45 countries. The fourth edition in 2016 was opened by His Excellency Mouhammad Boun Abdallah DIONNE, Prime Minister, Republic of Senegal.

Senegal is the ideal place to host a mining event as it is one of the stellar economic performers of West Africa and a haven for investors. Exploration is going on in full scale in the country and several mining giants such as Toro Gold and Bassari Resources move into production. As well as gold, the nation is also rich in iron ore with an estimated 75- million tonnes of reserves and grand Cote Operations have found promising Zircon reserves, North of Dakar. Implementation of the mining code in March 2017 promoting transparency and sustainability have also attracted investment as it shows the political will of the government to further exploration and production.

SIM Senegal 2018 will concentrate on new developments and investment for further growth and expansion of the Senegalese mining sector. The conference will focus on the new mining code and how it can benefit both the country’s social and economic development and the profitability of the mining houses. The informative sessions will also look into the long-term aspect of the industry by delving into the idea of investing in renewable energies to create cheaper onsite generation capacity for the mining house and there contributing to sustainability. The updated and saleable programme will ensure that the right people attend i.e. principal audience of mining houses, ministers and investors.