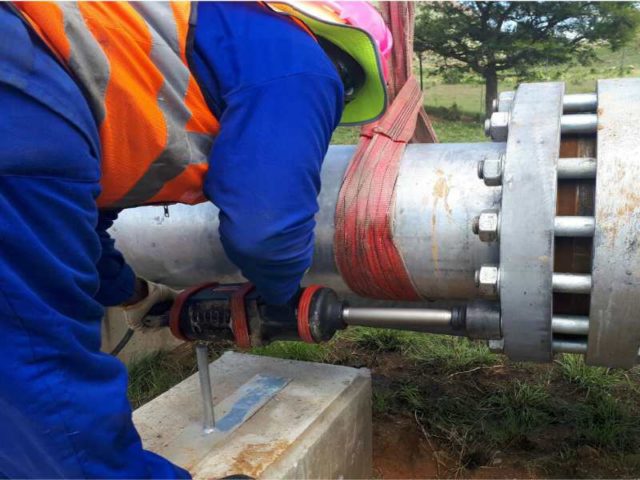 A contract to construct a 13 km tailing pipeline at Nkomati Nickel – awarded towards the end of 2017 – is well underway. TDS Projects Construction was awarded the contract for the pipeline at the Nkomati nickel mine, which is situated 300 km east of Johannesburg.

It has one of the largest nickel reserves in South Africa having estimated reserves of 408.6 Mt of ore grading containing an approximate 1.35 Mt of nickel metal.

The pipeline will connect to the cross valley tailings storage facility at Nkomati’s Onverwacht site.

TDS was contracted for the project by Robor Pipe Systems, with whom TDS has a long standing working relationship as one of their preferred sub-contractors. According to TDS operations director, Willie Pieters, the two firms frequently collaborate on pipeline projects.

“Due to the competitive nature of the market TDS Projects Construction and Robor decided to work together on projects where pipes were to be supplied and installed. Robor is one of the major pipe suppliers in SA, and choose to partner with us based on our expertise, capability and excellent safety track record,” says Pieters.

According to Pieters, pipeline installations of this magnitude are not uncommon in the industry although this particular project does show some of Robor’s unique hallmarks.

“Robor has previously supplied several of these pipe columns already, however, the piping with a HDPE stub flange with a 14 mm thick HDPE lining is unique to Robor,” Pieters explains.

He goes on to say that this type of piping lasts longer and, is therefore, more cost effective in the long term.

According to Pieters, TDS Projects Construction is confident in its capability to complete the project on time and to the highest levels of quality.

“Very few contractors have the experience and expertise to take on an installation of this magnitude. This project proves not only TDS’s competency but also our competiveness in the market.”