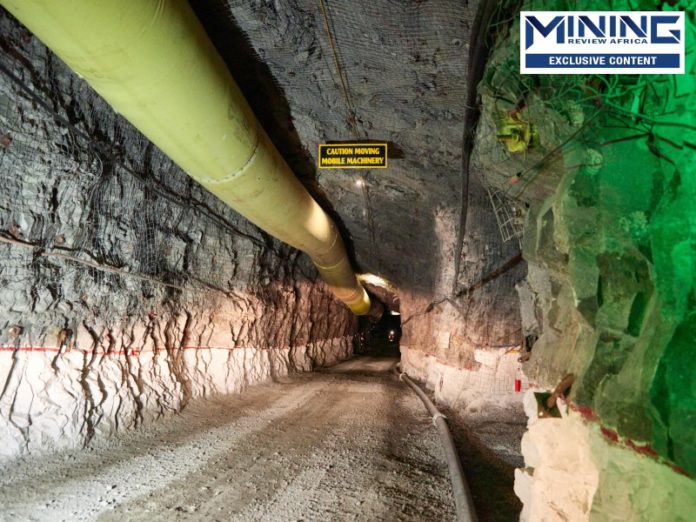 Dual-listed gold major B2Gold’s Otjikoto mine in Namibia may not be the largest producer in the company’s three operating mines portfolio, but nonetheless it is a star performer.

Having nearly completed seven years of fruitful open pit production and operating performance, Otjikoto has embarked on a new journey – establishing an underground mine which will support its annual production targets as the mine matures and potentially enable a significantly longer lifespan.

Since producing first gold in December 2014, Otjikoto’s star has always shone brightly – and having visited the mine, its not hard to see why. Yes, it comprises a good, economically sound ore body and a well-constructed and operated process plant – but there is a lot more to this story. It is run by a team (not only management) who are undoubtedly true experts in their fields. Coupled with passion, commitment, and devotion to the mine’s daily needs, it has become almost impossible to fail in any task, big or small, undertaken.

I was fortunate to have spent time with the various heads of department on site (in addition to Dawe, this included the general manager, underground project manager, dispatch manager, power plant manager, spares storage facility manager and heavy mobile equipment manager), each fulfilling their roles and responsibilities with unscrupulous dedication and drive.

For those who don’t know the mine, it is situated in north-central Namibia, about an hour’s flight from Windhoek. It comprises two adjacent open pits – the original Otjikoto pit and the newer Wolfshag pit.

Together, these two pits have consistently delivered solid production years which in 2020 totalled 168 041 oz of gold, near the midpoint of its guidance range. While this was slightly lower than normal, it was expected due to lower grade mined areas. This scenario is short-lived and the mine is on track to produce between 180 000 and 200 000 oz of gold in 2021, within the range of Otjikoto’s annual production record (of 191 534 oz achieved in 2017). This can be attributed to high-grade ore which will be mined from Phase 3 of the Wolfshag pit in the second half of 2021. Important to note, Dawe shares, is the plant’s +98.6% recovery rate, “an exceptional achievement.”

Tapping into the greater ore body

In December 2019, the B2Gold board approved the development of the Wolfshag underground mine, a down-plunge extension of the narrow, high-grade Wolfshag ore body calculated at this stage to contain 210 000 oz of gold in 1.2 Moz of ore at 5.57 g/t gold.

During the first half of 2020, engineering of the underground mine commenced. Development mining contractor Murray & Roberts Cementation was appointed (in joint venture with local Namibian partner, Lewcor). The latter half of the year saw them mobilise on site and immediately thereafter commence with the development of the portal (situated within the Phase 2 portion of the Otjikoto open pit). The primary underground ramp subsequently followed.

“In the fourth quarter of 2020, development of the portal was completed while the decline itself continued into the start of 2021 – which in August had achieved around 670 m in length and a 70 m vertical depth at a dipping angle of 14°. It is due to reach its final length (950 m) before year end. A ventilation raisebore shaft, 220 m in length in the primary phase and then another 70 m to service the ore body is also included in the underground mine’s infrastructure,” explains Eric Mouton, underground project manager.

“This project is progressing comfortably and we remain on track to commence with stope production work in the first months of 2022,” Dawe confirms.

With underground development well underway, Otjikoto’s higher 2021 gold production level (of between 180 000 and 200 000 oz) is expected to continue through to 2024, as production from the Wolfshag open pit ramps down towards closure and the full production output becomes supplemented from the Otjikoto pit, together with existing medium and low-grade stockpiles.

“The Otjikoto pit still has significant gold tonnages to contribute and so we are simultaneously developing the decline while opening up a combined Phase 3 and 4 (pitwall/pushback expansions),” Mouton adds. To ensure the mine’s excellent safety record is not compromised in this regard, the entire portal entrance has been shotcreted and a corrugated arch established to protect men working within pit.

While the combination of the underground mine and Otjikoto pits’ known and mineable resources equates to a five-year lifespan, Dawe reveals that the ore body at depth has only been partly defined. “Our mine model only incorporates a small fraction of our underground resource which we’ve only just started to uncover through surface drilling.” The potential to expand the Otjikoto pit with a Phase 5 pushback is also on the cards – “so this mine’s future is far from over.”

For now, the 3.5 Mtpa (ROM) process plant continues as is – designed to handle ore grade of no higher than 2.8 g/t. While the underground mine varies in grade between 3 and 6 g/t, when combined with surface material, the plant will continue to process as per the original grading specifications. “As Mark mentioned, our plant delivers an exceptional performance with over 98% recoveries, an achievement we are particularly proud of,” says general manager Eric Barnard.

In today’s new age technology-driven era, could this be a missing piece in completing the Otjikoto puzzle? No, it is not – over and above a sound operation and a dependable team, this mine also benefits from technology – which can be seen throughout all aspects of the operation, says Steve Robinson, mining technical services manager.

The dispatch control room is good evidence of this. The mine deploys a system developed by Wenco, which specialises in digital technologies for mining. This system gives both a broad and in-depth view of the mine and can track every machine, its performance and even has the capability to debottleneck truck queues at the loader when they arise through automated algorithms.

The downstream benefits this has thanks to streamlined/optimised productivity is substantial. Incorporated into this system is a fatigue monitoring system, which having seen it first-hand, undeniably works. The system overriders the truck and stops it – this applies to any driver who is not fully cognisant behind the wheel.

To best control potential pit wall failures, the mine makes use of a robotic pit stability monitoring system. While the system is not designed to prevent pit wall failures, it does monitor seismic activity and can predict wall failures, enabling the mine to be prepared for them – which obviously has the benefit of protecting both man and machine from danger or injury or even worse, fatalities.

Spare parts as well as PPE are also monitored using smart technology systems, and this includes fuel monitoring which I found particularly impressive.

“Naturally the underground mine will follow our technology focused approach,” Dawe points out. “The mine will have an entirely wireless communication system, automated drill rigs, a semi-autonomous space station fleet system as well as the same fatigue monitoring system we have on surface.

“Naturally, our employees underground will require the best training available which we will provide, and we will further ensure the contractors we work with do as well. Our intention is not to dilute our Namibian workforce with international expatriates,” Dawe affirms.

Otjikoto’s technology also extends beyond the mine – it operates a 30 MW hybrid microgrid, which was the first within the Namibian mining sector to add synchronicity to the plant – meaning it can autonomously stop and start as required. In fact, the autonomous integration of the PV plant with the HFO plant through a specialised algorithm, was a world first.

The HFO plant offers a 24 MW capacity and is supplemented by a 7 MW photovoltaic plant as well. In its first year the power plant saved 2.3 million litres in HFO fuel and reduced associated power generation fuel costs by approximately 10%. It has been delivering similar significant savings ever since including the elimination of over 17 000 t of CO2 equivalent emissions in 2020.

“We are nonetheless looking at ways to reduce our power costs further and are undertaking a project to link the mine to the national power grid. At a cost of $13 million, the mine will oversee and fund the construction of a 21 km overhead power line. Not only will this reduce our costs, but it will also significantly reduce our carbon emissions as well,” says Sydney Kavehaha, electrical O&M superintendent.

Truly one can never understand the full breadth of a mining operation without visiting it and I was afforded that opportunity. And it was well worth my while. Meeting the team, understanding their work ethic and seeing it happen is testament to Otjikoto’s great success – long may it continue.